No property type remained more in flux this year than office. While it became clear that once the threat of COVID-19 subsided, people were eager to travel, eat at restaurants and shop in person, propping up fundamentals for hotels and retail, both office tenants and landlords continued to face an ever-changing pandemic outlook and a lack of consensus among millions of office workers about whether they wanted to return, for how many days a week and with what safety guidelines in place.

There was some good news for office owners and investors in 2021. To begin with, massive loan defaults on office buildings never materialized as many office tenants have postponed making major decisions about their leases with the pandemic still underway. Meanwhile, a substantial number of office users began coming back to in-office work, reassured by both vaccine availability and, in many cases, vaccine mandates instituted by major employers.

Tech companies continued shoring up their office portfolios, in spite of being among the most vocal proponents of remote work in media statements. In fact, the markets with substantial tech company concentrations were among those seeing the biggest office rent increases since the pandemic began. And a substantial number of office workers, burned out from working in their living rooms and the ever-blurring boundary between their work and home lives, started to express a wish to return to the office at least for part of the week. This has benefited not only traditional office landlords, but co-working operators, who have been able to provide employees with still-closed offices an alternative space to work in that wasn’t their living room or kitchen. As a result, demand for office space has remained strong enough to reassure both lenders and investors that office continues to be a viable real estate play.

At the same time, the emergence of new COVID-19 variants, including Delta in the summer and Omicron in the winter, have disrupted existing return-to-office plans for multiple companies. So as the country experiences another holiday season disrupted by the virus, the future of office life remains as uncertain as ever heading into 2022.

Driven by a combination of e-commerce growth and supply-chain bottlenecks around the world, industrial properties continued experiencing an incredible hot streak this year. Rents rose to record levels. Shortages of available space, in spite of millions of square feet of new construction coming on the market, forced tenants to renew leases years ahead of schedule or snap up whatever space was available now in anticipation of future need. Attracted by an expectation of steady returns and continued growth, many different groups of investors battled it out for whatever properties became available, in spite of the need to pay top dollar. And when it came to industrial net lease assets, demand has been so strong, some properties have been put on the market without price tags attached.

Multifamily was another sector that outperformed expectations in 2021. There have been some dark spots because of the slow disbursement of rental aid to struggling tenants in the first half of the year. But with U.S. for-sale housing prices rising so much Fannie Mae and Freddie Mac were forced to raise their mortgage limits to $1 million, demand for for-rent apartment units abounded, pushing rents in some markets to double-digit growth.

Demand for multifamily plays from equity investors has been plentiful, with multiple new funds focusing on the sector. In fact, sourcing new multifamily acquisitions has become so challenging in recent months, investors have been branching out into smaller markets, hiring out-of-house acquisition help, using technology to find off-the market deals and increasing their hold times to make up for the shortage of new assets available to trade.

As with industrial properties, investors’ outlook for the multifamily sector in the months ahead remains bright, with surveyed WMRE readers expecting further rent growth, expanded access to financing and steady returns.

SFR Assets Have Been Growing in Prominence
alexsl/iStock/Getty Images

Single-family rentals (SFRs) have also benefitted tremendously from the shortage of affordable houses for sale. Demand from young families priced out of the for-sale market has been so high, more and more institutional investors expanded their strategies from acquiring single-family portfolios and turning them into rentals to building brand new BTRs (build-to-rent communities). By late fall, average rent growth for SFR properties, already strong throughout 2020 and 2021, was nearing double digits. Meanwhile, troubles experienced by the iBuying unit of house listing site Zillow (the firm got too aggressive in bidding for properties it intended to flip) have created more discounted acquisition opportunities for institutional SFR investors.

There has been slow, but steady by progress in the commercial real estate industry’s adoption of proptech tools in 2021. Investors are using more non-traditional data points to pick the right markets for acquisition and development opportunities. They are incorporating location recommendation engines and automated underwriting into their acquisition processes.

In the multifamily sector, virtual leasing agents and virtual tours have become quite commonplace, in addition to other tools that make property management easier at a time when the sector is dealing with staffing shortages. Yet while an increasing number of firms have accepted that they need to invest in proptech, there is still too much fragmentation in the sector for investors to always be able to tell which tools make the most sense or to create industry-wide standards for tools used in processes such as underwriting.

In addition to the disruption brought on by the pandemic, 2021 brought with it a number of large-scale natural disasters, highlighting the need for commercial real estate owners and investors to prepare for a future in which climate change plays an ever-bigger role. In the winter, an unexpected cold front brought a disastrous week for Texans. Wildfires continued to plague Western United States. In early fall, Hurricane Ida swept through both the Southeast and the Northeast, causing not only immediate loss of lives, but weeks-long power outages in Louisiana, flooded basements in New York, New Jersey and Pennsylvania and damage to infrastructure that would cause myriad knock-off effects, including added pressure on an already strained supply chain system.

Some industry players are taking these threats seriously, especially when it comes to setting goals for cutting carbon emissions in spite of the associated costs. Yet many commercial real estate owners and investors remain complacent about the risk that climate change poses for their portfolios and some feel the numbers still don’t pencil out for them when it comes to investing in sustainable development. The bottom line is that while an increasing number of institutional investors are embracing sustainability goals, the progress continues to be too slow in view of the pressing time concerns.

A surge of activism in 2020 prompted the commercial real estate industry to take a renewed look at its diversity, equity and inclusion efforts. Many major firms added chief diversity officers and there seemed to be tailwinds overall in having frank conversations about how to shake up what has been a historically white, male dominated field.

Those conversations did continue in 2021, but the momentum slowed and so did progress. Some notable steps included the Real Estate Executive Council introducing the Diversity Partners Program and Sam Chandan, associate dean of the Schack Institute of Real Estate at New York University’s School of Professional Studies, as well as the Larry & Klara Silverstein Chair in Real Estate Development & Investment, launching the Real Estate Pride Council.

Despite that, recent research and analysis from groups like the CREW Network, NAREIM and Bisnow shows that progress remains uneven.

The recent tick up has put renewed focus on the time-tested thesis that commercial real estate provides a useful hedge during inflationary periods. Sales of properties remained strong as the year drew to a close, in part fueled by investors seeking a safe haven. Some multifamily investors have signaled they intend to extend hold periods in part because of the changing investment climate.

Meanwhile, recent research from Nareit showed how REITs have fared in previous inflationary periods, making the case for continued investment in the sector. That complemented recent research from Berkadia, which showed real estate investments are good bets when inflation is high. Inflation also came up during some of the sessions at our second WMRE Forum of the year.

But not all real estate investments may fare the same amid inflation. Specifically, net lease retail properties tend to have very long leases so there is a risk that rental rates may not keep up with the pace of inflation.

The year started quietly on the mergers and acquisitions front. But that all changed quickly. Soon announcements were coming fast and furious and as 2021 comes to a close the REIT M&A count had reached double digits. Most of the deals were public-to-public—two REITs in the same sector merging their portfolios.

Some of the deals announced in 2021 included:

REIT M&A activity was a frequent topic during our monthly conversations with Nareit Executive Vice President and Economist John Worth, most recently in our discussion in early November.

The year featured a lot of talk about a shortage of affordable housing, especially amid skyrocketing single-family home prices and multifamily rents. But it ended with few concrete solutions on the table.

Some investors see an opportunity to bring product to the market.

Founded in 2007 by former National Multi Housing Council chairman Daryl Carter, Avanath Capital Management was one of the first investment firms to bring institutional capital into the affordable housing space and Avanath is currently deploying its fourth affordable housing fund after raising $760 million from a variety of investors. High-net-worth investors, family offices and accredited investors are also expressing more interest in the sector.

At the federal level, the recently enacted infrastructure bill may provide a stimulus for some development and provide a boost to affordable housing. But many industry insiders continue to look to the Build Back Better bill, which seems uncertain to pass, for further stimulus to the segment. If it does become law, it could help boost the use of Low-Income Housing Tax Credits.

In addition, the continued push for environmental, social, and governance (ESG) goals has led to increased interest in affordable housing investment. And Fannie Mae and Freddie Mac also have an eye on the issue with aims to help increase access to housing.

Poised for a Strong 2022
Peshkova/iStock/Getty Images

The COVID-19 pandemic has entered yet another phase. The Omicron variant has emerged and is leading to a spike in caseloads in many nations and new rounds of disruptions. We don’t know yet how high this peak will be and how long it will last.

Every indication so far is that the variant is producing lower percentages of severe cases and hospitalizations than previous variants. But the sheer number of positive cases means that even if the percentage of severe cases is lower, it could still put strains on hospital systems that have been overburdened repeatedly throughout the pandemic.

This is important to note because the vast majority of pieces submitted to our annual Outlook supplement were written before this new wave began. So, the potential effects of Omicron are not necessarily factored into many of the outlook pieces.

That said, the general experience throughout the pandemic has been that each wave lasts for a few months and then subsides. In fact, given how quickly it is spreading, there is reason to think Omicron’s peak may even come and go at a faster pace than previous waves. It means 2022 might start on a harrowing note, but then quickly improve.

The picture for commercial real estate is likely to shift quickly as well. Whatever short-term disruptions emerge—such as further delays in returns to offices and a dip in travel—the long-term factors many of the pieces in our supplement point to will ultimately be more important than any short-term disruptions caused by this latest wave. 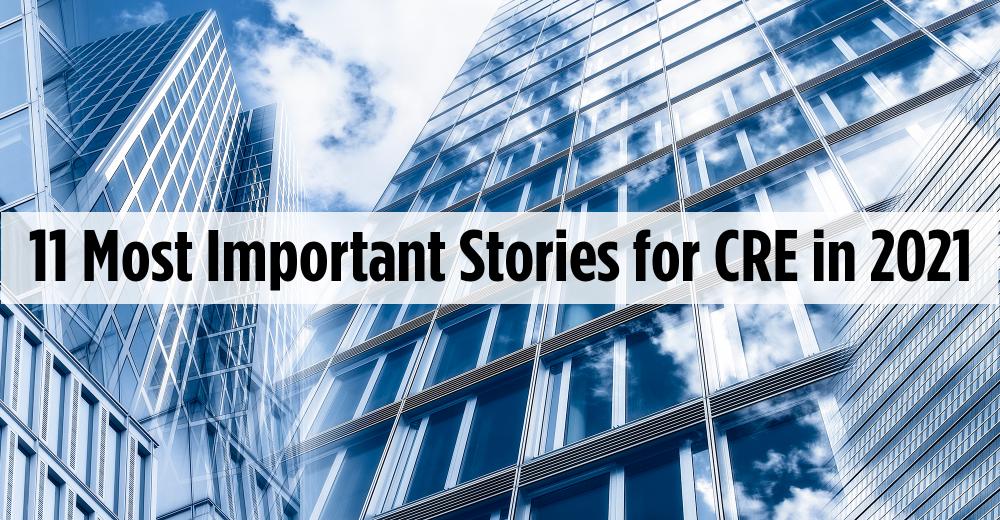 Next Up
14 Influential Women in Real Estate
Start Slideshow ›