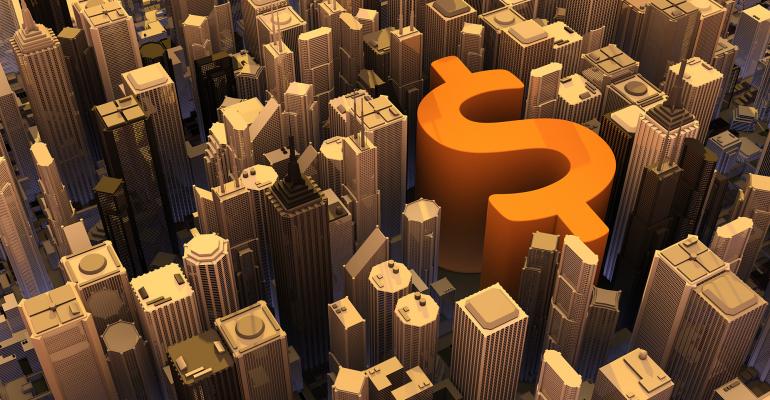 According to Bureau of Labor Statistics estimates, the consumer price index rose 5.4 percent in September, the fifth straight month in which the inflation rate was five percent or greater. Views remain mixed on whether higher inflation could be transitory—caused by a combination of reopening economy and a choked supply chain—or whether more long-term inflationary pressures are at play.

“I think it is transitory, but inflation could be stickier than people think and continue into 2022,” says Richard Barkham, PhD, global chief economist, head of global research and head of Americas Research at CBRE. Barkham expects inflation to drop back once some of the supply side issues contributing to price increases improve as more people return to the workforce.

One of the common selling points for commercial real estate investment is that the asset class provides a good hedge against inflation because it generates cash flow. Owners also have the ability to raise rents along with rising inflation—in fact some leases have automatic CPI adjustments built in. Higher revenues also correlate to higher property values. However, experts caution that the concept of commercial real estate as an inflation hedge in investment portfolios is sometimes misunderstood, and certain properties are better positioned to in environments with rising prices than others.

Related: Who's Afraid of the Inflation Wolf?

“Commercial real estate doesn’t give you instantaneous protection against all unexpected blips in inflation,” says Barkham. “However, if you look at a longer period of five, seven or 10 years, generally speaking, the values of real estate will go up with inflation.” Real estate does keep pace with rising inflation reasonably well with higher prices that flow through to rents, although that is not true of all sectors, he adds.

Industry research supports the argument that real estate assets provide protection against inflation. According to Nareit, dividend increases for REITs have outpaced inflation as measured by the Consumer Price Index in all but two of the last 20 years. In 2002, dividend growth failed to edge out inflation by just half a percentage point. The only other time in recent history dividend growth fell below inflation was just after the financial crisis in 2009. Over the 20-year period, average annual growth for dividends per share were 9.6 percent (or 8.9 percent compounded) compared to 2.1 percent (2.2 percent compounded) for consumer prices.

Berkadia recently introduced a new white paper that assesses inflation and risk in real estate. In particular, the research compared performance of private commercial real estate, equity REITs and the stock market. One of the key findings of the research for the post-Great Financial Crisis (GFC) period studied is that higher inflation tends to help private commercial real estate returns, while hurting REIT and stock returns. In addition, when comparing individual property types, privately held apartments and industrial delivered the strongest risk-adjusted performance.

It is important to note a number of variables that can impact an owner’s ability to capture inflation increases, such as supply and demand and the lease structure. “In terms of the apartments, the short-term leases are more flexible and allow for quick and rapid responses that allow landlords to capture rent increases when faced with exogenous factors like inflation,” says Dori Nolan, senior vice president, National Client Services at Berkadia.

Some owners will structure leases with periodic rent increases, or even link rent increases to increases in the CPI. Industrial will provide very good short-term and long-term inflation hedging, particularly as demand is so strong right now. In the past, retail has been quite good at delivering short-term inflation protection, because retailers are usually quick to incorporate price changes into their business models. “I don’t know that retail would be able to do that now, because physical retail has been highly impeded by internet retail,” says Barkham. Office will offer some longer term inflation hedging protection, but in the short term the sector has been weakened by demand factors, he adds.

Another factor to consider is that property types are impacted differently by inflationary pressures on the operating expense side. Although shopping centers and office buildings can pass expenses through to tenants as common area maintenance costs, owners will bear some of the cost on assets that are not fully occupied. In addition, those property types that also have operating businesses, such as seniors housing and hospitality, are more directly impacted by rising costs. Labor costs in particular have been a bigger concern for operators of hotels and assisted living/memory care facilities.

Cadre is one investment management firm that is factoring inflation into decisions on portfolio construction. “From a blanket perspective, we’re in the camp that there is inflation that is here to stay, at least in the immediate and short-term of the next 12 to 24 months,” says Dan Rosenbloom, managing director and head of investments at Cadre, a tech-centric real estate investment management company. Cade also believes that there will be a run-up in asset values with some properties that will be better positioned to capture it.

Multifamily is one asset type that Cadre is leaning into more so than others. “When we’re buying multifamily, we have to look at the basis and the cost per unit. During an inflationary time, like we’re seeing now, costs will go up. So, your basis looks more compelling related to what replacement cost would be,” says Rosenbloom. The question is if inflation starts to happen, can investors actually capture that income? “This is where market selection and asset selection become really important. You need someone who understands not only the macro, but the micro markets that you are investing in,” he says.

For example, Cadre recently purchased an apartment property in the Southwest where rents in that particular submarket are being marked up by about 20 percent for leases that are rolling. “What we are seeing in that market is that wages are going up or people that are coming in have jobs where they can afford those increases,” he says.

Investors also need to watch out for medium-term hiccups in the economy due to inflation, cautions Barkham. If the Fed thinks inflation is transitory, it won’t be very aggressive in trying to control it. However, if the Fed thinks inflation is going to be something more than transitory, then there could be a sharp rise in interest rates, which will be quite damaging to real estate in the short term. These are all factors playing out that impact scenarios for short-term inflation protection, he says.