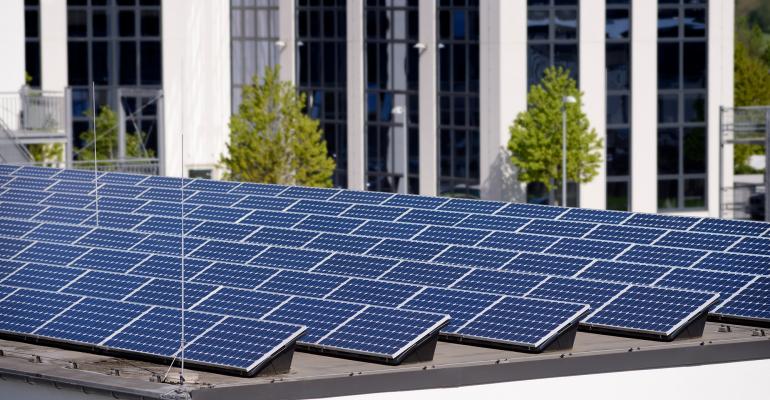 Both tenants and investors are increasingly focusing on office building’s carbon footprints when considering new deals.

As the push to become carbon neutral accelerates globally, there is increasing pressure on office building owners to implement changes to accommodate those goals, including by making their buildings more energy efficient, using sustainable building materials, reducing waste and improving water systems. Some 105 big companies, including Amazon, Microsoft, Unilever, and BlackRock among others, have pledged to be carbon neutral by 2040, with additional firms promising to reduce carbon emissions by 2030. More than 100 countries, including the U.S., have pledged to become carbon neutral by 2050.

“A future where businesses are taxed on their carbon emissions could be close at hand,” said Drew Shula, founder and CEO of The Verdical Group, a Los Angeles-based green-building consulting firm.

Related: The Business Case for Sustainability in Commercial Real Estate

California has already passed legislation requiring new and significantly renovated commercial buildings to be carbon neutral by 2030. Additionally, New York City’s Climate Mobilization Act (CMA) includes Local Law 97, which impacts all buildings over 25,000 sq. ft. and calculates carbon intensity for buildings on a per square foot basis, assigning limits to intensity beginning in 2024. Buildings that exceed that limit will be fined $268 per ton of carbon, notes Meadow Hackett, manager for sustainability and KPI services at consulting firm Deloitte.

She notes that many office REITs are planning carbon neutrality strategies to avoid penalties at their New York City properties, and companies are making capital allocation decisions around energy efficiency based on penalty avoidance.

Green building experts acknowledge that a net zero mandate would present a challenge for office building owners/investors, but note that it may not be as daunting as they might perceive.

“Any existing building’s carbon emissions can be reduced, and the first step is to understand its current level of performance,” says Elizabeth Beardsley, senior policy counsel for the U.S. Green Building Council (USGBC). She adds that this requires metering and reviewing utility bills and any other available building performance data that can help identify areas in need of increased operational efficiency and performance.

Once this assessment is completed, existing building owners and operators should develop a strategic action plan aimed at reducing annual building greenhouse gas emissions, Beardsley says. “The action plan can help owners to develop an ‘optimal path’ forward via the evaluation of alternative scenarios to assess opportunities for system upgrades, efficiency improvements, renewable energy generation and/or procurement, and calculate associated costs for each scenario.”

According to Rielle Green, manager of energy & sustainability with CBRE Property Management, which manages 2.7 billion sq. ft. of commercial real estate globally, there is no one-size-fits-all solution for getting to net zero. “Every property is uniquely built with different operating systems and located in different areas with different climates.”

Beardsley also notes that conservation and recycling are other important elements for reducing a building’s carbon footprint. “Reducing a building’s water consumption reduces associated energy loads for water provision and wastewater management, as potable water treatment, distribution and use are highly energy-intensive,” she says.

The Los Angeles Department of Water & Power, for example, began reducing the footprint of its 17-story, 55-year-old, all-electric John Ferro Building in 2013 with a suite of energy efficiency measures, including lighting retrofits, chiller and fan system upgrades that earned the building’s initial LEED certification in 2015. The following year, the building, which houses LADWP’s 11,000 employees, recertified LEED Gold and in September 2019, it became the first building in California to achieve LEED Net Zero Energy.

Another example is the historic headquarters of Entegrity Partners, a sustainability and energy services company specializing in the implementation of energy conservation and renewable energy projects, which became the first LEED Zero-certified project in the U.S. in 2019 and the second in the world. The building, which achieved LEED Platinum for New Construction, was also awarded Zero Energy certification by the International Living Future Institute.

Office buildings with high performing environmental improvements also command a rent premium, according to Beardsley, and trade at higher values than traditional buildings because they offer savings in operational costs. She cites research that indicates tenant were willing to pay $0.75 per sq. ft. for space in a LEED-certified office building compared to a non-LEED certified one.

Additionally, the U.S General Services Administration (GSA) released a 2018 study on the impact of high-performance buildings that quantified their benefits compared to their legacy building counterparts in the GSA’s portfolio. The study found that the upgraded buildings delivered greater cost savings and tenant satisfaction were deemed, therefore, a less risky investment than traditional buildings.

Shula suggests that Blackrock, the world’s largest asset manager, is a great example of this preference for more environmentally sustainable building. The firm committed to net zero for its own operations and is making being carbon neutral the central focus for its more than $8 trillion in assets under management.

Meanwhile, “[Institutional] investors are placing ESG, and climate change in particular, central to their investment strategies.”

Hackett notes, for example, that members of Net Zero Asset Owner Alliance, which represent roughly $5 trillion in assets under management, have pledged to transition their investment portfolios to net zero emissions by 2050.

The cost for upgrading existing buildings to achieve net zero depends on many factors, but the building’s age and relative inefficiency are key determinants, Beardsley says. She also notes that the building’s size, shape, and location may limit its capacity to generate on-site renewable energy.

However, “You don't need to get to zero carbon all at once,” says Shula. “Create a plan to achieve carbon neutrality by 2030, then work backward to today to determine what steps to take first.”

For example, as building equipment reaches end-of-life, it should be replaced with more efficient, all-electric equipment and appliances to enable the reduction of the carbon footprint, he notes.

Getting ground-up buildings to net zero, on the other hand, adds a cost premium of zero to 1 percent when designed and developed as a high-performance building from the start, according to a 2019 USGBC report, The study also noted that operational savings recoup any incremental costs for getting to net zero in a relatively short time, with return on investment for both existing and new office buildings beginning in as little as a year.

Emma Hughes, a LEED project manager with USGBC, notes that with today’s tools, technology and knowledge all new buildings can be designed and constructed to highly efficient standards and achieve net zero energy during the construction process via integration of renewable energy generation and/or procurement.