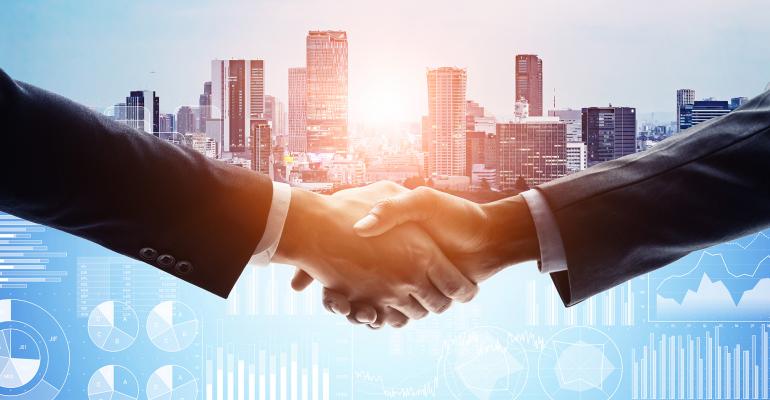 REIT M&A Activity Has Kicked Back into High Gear

Recently announced deals amount to more than $70 billion in mergers and acquisition activity among publicly-traded REITs.

Economic activity has roared back to life in 2021 and one especially busy area of late has been the world of REIT mergers. According to research from JLL, REIT merger and activity year-to-date had reached $70 billion as of early June, and that robust deal flow is expected to continue throughout the second half of the year.

“The obvious observation, besides the headline number of $70 billion and growing, is that it is a pretty diverse mix of asset classes that are represented,” says Sheheryar Hafeez, a managing director in the New York office of JLL Capital Markets, Americas. Major deals have been announced in industrial, retail, net lease and hotels to date.

Deals that have been announced in 2021 include:

Since the JLL research was released, Ventas also announced that it had entered into an agreement to acquire New Senior Investment Group in an all-stock transaction valued at $2.3 billion.

“Some of this activity is indicative of where we are in the cycle and issuers seeing potential for a nice rebound in cash flows as we get on the other side of the pandemic. REITs are positioning portfolios and perhaps taking some calculated risks in terms of increasing exposure to certain property types that have more leverage to the upside,” says Stephen Boyd, senior director, U.S. Real Estate and Leisure at Fitch Ratings. Seniors housing in particular is a good example of that, he adds.

The surge in mergers and acquisitions comes after two relatively quiet years. Following a big year in 2018 where transactions reached $86 billion, activity was more subdued in both 2019 and 2020 at $25 billion and $17 billion, respectively. Hafeez expects activity to continue in the second half of the year with total annual volume that could challenge the record high of $103 billion that occurred in 2006.

There are a variety of factors driving deals in the current market, including pent-up demand, abundant dry powder, the low cost of capital and good buying opportunities. Activity also is being fueled on two sides. REITs are using their own stock to acquire competitors for a variety of strategic reasons. For example, Kimco’s acquisition of Weingarten is motivated in part by the REIT’s desire for more geographic diversification and increased exposure to the Sun Belt, notes Boyd. Meanwhile, Realty Income’s acquisition of Vereit was influenced by the ability of Realty Income to leverage its stronger balance and an opportunity to refinance some maturing debt obligations in coming years at accretive rates in order to increase its scale, he adds.

On the other side, there is a significant amount of capital held by private equity groups that are looking to acquire REITs in cash deals. One example of that is the joint venture formed by Blackstone and Starwood to buy Extended Stay America. Blackstone and Starwood saw an opportunity to come in and buy high quality assets; potentially sell off some properties; put on a sizable amount of debt to fund the deal through the CMBS market; and ride a cyclical recovery, notes Boyd.

Typically, there is increased mergers and acquisitions activity at the very beginning of a cycle where there is some proverbial “blood in the streets” in terms of distress, adds Iman Brivanlou, managing director of high income equities at TCW and the TCW Global Real Estate Fund. That is where REITs that were able to navigate the downturn better and have strong balance sheets are positioned to take advantage of acquisition opportunities. There also tends to be sales activity near the end of a cycle where shrewd sellers want to take advantage of peak valuations. In this market, there are both of those elements at play with hard hit sectors such as lodging and retail, and at the same time, other sectors such as industrial and net lease have outperformed during the pandemic.

“At the same time, there is an incredible backdrop of free money essentially floating around as a result of monetary policy and accommodation going on by the Fed,” says Brivanlou. To have cash on the balance sheet in this environment is almost viewed as a drag. So, companies are looking to get rid of that cash, and deploying it in real estate is attractive because real estate is viewed as a hedge and replacement costs are continuing to rise, he adds.

REITs have been performing well in 2021, and in some cases, REITs are able to take advantage of a valuation premium over some others. One example of that is Realty Income’s announced acquisition of Vereit. Realty Income trades at a much higher premium relative to NAV as compared to some of its peers, which essentially means that the stock is trading a lot higher than analyst estimates of NAV. “That implies there is what we call a ‘green signal’ to issue stock to fund growth, because it is accretive to do so,” says Hafeez. There are always different reasons to merge, such as synergy or operating efficiencies, but the ability to do that accretively is always the question, he adds.

One of the common obstacles to consolidation within the sector has been that REITs tend to trade at similar multiples. “There isn’t a big arbitrage of using your richly valued currency to buy assets on the cheap, and there aren’t a whole lot of scale economies in traditional parts of real estate like office or industrial,” says Boyd. Added on to that are the social issues of management teams and whether or not they want to sell, he adds.

However, the current environment does seem to be ripe for M&A deals to continue into the second half of the year. “I do think we will see more M&A activity as we go through the year, particularly in some of the operationally intensive parts of real estate, like healthcare, self-storage and data centers where there tends to be more scale economies that can be brought to bear compared to some  other property types,” says Boyd.

Some industry observers are wary that deals being done could be pushing the envelope on valuations. “From the TCW vantage point, there is a risk that you are baking in assumptions when you are purchasing at these levels that may not hold up in the long run,” notes Brivanlou. Companies on the acquiring side may be penciling in numbers based on today’s rates that may change tomorrow once the Fed begins to tighten its monetary policy, he says. Another hurdle to watch is inflation. When does that start to rear its head, both for the Fed and acquirers? That could take some of the wind out of the sales on M&A activity, but that likely won’t occur this year, he says.