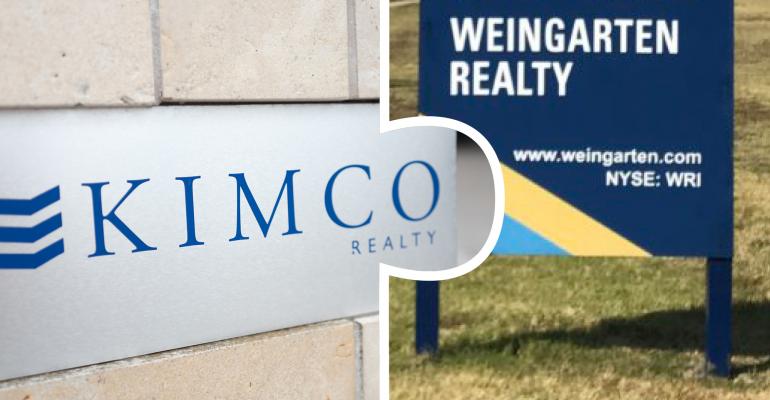 The merged shopping center REIT will have a market cap of $12 billion.

Two of the oldest and largest operators of shopping centers in the U.S. are coming together in a mammoth REIT merger. Jericho, N.Y.-based Kimco Realty Corp. and Houston-based Weingarten Realty this morning announced a plan to merge the companies, which will result in a REIT that is expected to have a pro forma equity market capitalization of approximately $12.0 billion and a pro forma total enterprise value of approximately $20.5 billion.

“We are thrilled to be joining forces in a combination that is highly strategic and positions the merged company to unlock considerable value in some of the highest growth markets in the country,” Kimco CEO Conor Flynn said on a conference call this morning.

Related: REITs End Quarter on a Roll, Posting Gains Across the Board in March

“While we have successfully built and continue to operate nearly 160 open-air, grocery-anchored centers in some of the fastest growing markets in the Sun Belt and Western U.S., joining forces with the highly capable and proven leadership team at Kimco is the right, long-term decision for our company to move to the next level of growth and the creation of long-term value for all stakeholders,” Drew Alexander, Weingarten chairman, president and CEO, said on the call.

Related: What Is the Right REIT Allocation?

Flynn and Alexander both emphasized how the deal brings together complementary portfolios of similar assets, particularly by bolstering Kimco’s footprint throughout the Sun Belt, including markets such as Houston, Miami, Phoenix, Atlanta and Orlando, where Weingarten has established a strong foothold. They also both talked about how grocery-anchored shopping centers have performed well throughout the pandemic. They benefited from having a tenant base that includes a lot of essential retailers who operated throughout the year while many other types of retailers were shut down. In addition, grocery-anchored centers played roles as last-mile fulfillment centers as online shopping surged.

“With our focus on these last-mile locations that are more valuable than ever due to their hybrid role as both a shopping destination and an omnichannel fulfillment epicenter, we have significantly strengthened and improved our portfolio quality while increasing our scale in our targeted high growth Sun Belt markets,” Flynn said. “The pandemic has enhanced the value of these properties that now operate under a last-mile hybrid model serving as vital fulfillment centers.”

Both boards have unanimously approved the deal. Weingarten will merge with and into Kimco, with Kimco continuing as the surviving public company. Under the terms of the merger agreement, each Weingarten common share will be converted into 1.408 newly issued shares of Kimco common stock plus $2.89 in cash, making the deal worth approximately $3.87 billion.

Other benefits both executives pointed to included cost savings and developmental opportunities. The companies estimate the combination will result in annualized cost synergies of $35 to $38 million on a GAAP basis (excluding accounting adjustments) and $31 to $34 million on a cash basis.

The combined company also plans to capitalize on development and redevelopment opportunities throughout the portfolio, including on mixed-use projects with a focus on adding multifamily components to existing properties where it can.

“Weingarten brings a largely funded and de-risked development pipeline that will require minimal capex and present vast potential in the form of redevelopments,” Flynn said. “This creates an exciting pathway to future growth and value creation.”

It also brings together two of the most established sector players. Weingarten’s real estate roots date back to the late 1940s when Joseph Joe Weingarten began developing stores to expand the family’s grocery business. Kimco Realty, meanwhile, was founded in 1966 by a group of investors, including Martin Kimmel and Milton Cooper. Both Weingarten and Kimco went public as REITs in the 1990s.

“This is a transaction that both companies have contemplated from time to time and we recognized that now is the right time to execute on this opportunity,” Flynn said.

Alexander added that the firms shared similar cultures and philosophies throughout their histories.

“We also believe our cultures are well-aligned given our commitments to putting ESG at the forefront of our organizations,” Alexander said. “This was quite clear in how we both successfully navigated the pandemic by embracing and supporting our tenants and local communities.”

The Kimco management team will lead the combined company, with Conor Flynn as CEO, Ross Cooper as president and chief investment officer, David Jamieson as COO and Glenn G. Cohen as CFO.