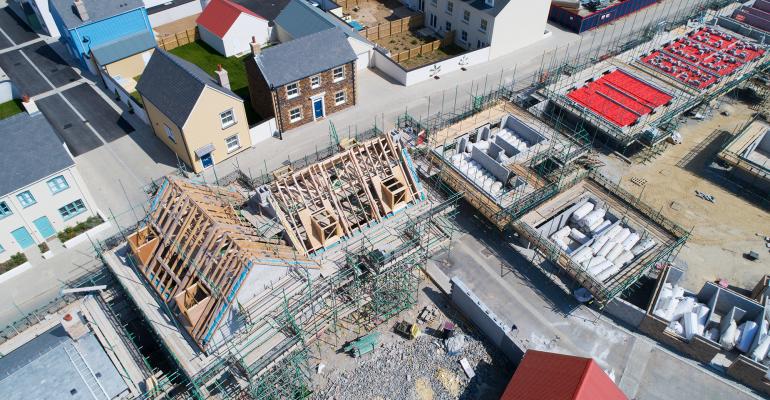 Facing heavy competition and lower yields on acquisitions of existing SFRs, investors are betting on building new communities from the ground up.

Earlier this month, global real estate investment firm Walton Global Holdings USA announced a joint venture with SVN | SFR Capital Management, a specialist in the single-family build-to-rent (BTR) sector, to developer and operate build-to-rent single-family rental (SFR) communities throughout the United States. The partners expect their first joint projects to start development in Colorado and Texas in 2022. These should be followed by the development of multiple BTR communities over the coming years, with the joint venture capitalizing on Walton Global’s 81,000-acre land portfolio and more than 180 already acquired master plans. In a statement announcing the deal, Jeff Cline, CEO of SVN | SFR Capital Management, noted that “with the continuing shortage of affordable homes and strong projected rent growth, we believe timing in the marketplace, land access and our strategic vision will lead us to become a leading group in the (BTR) investment segment.”

The joint venture is just the latest example of an increasingly popular play in the SFR sector. As SFRs have become an institutionally-investible asset class, the sector’s major players are positioning themselves for its next iteration—one that doesn’t pit individuals homebuyers against well-funded institutions.

Related: Why One Investor is Betting Billions on SFRs

“We are seeing the emergence of purpose-built single-family rental communities, or what we call the ‘SFR 2.0’ industry,” says Robert Sun, investment product strategist with global real estate investment firm GTIS Partners. “We are meeting the market demand for single-family housing through building new homes for rent rather than competing with potential homebuyers for existing homes.”

New York-based GTIS was one of the pioneers in the SFR space, investing in distressed homes in the wake of the 2008-2009 housing crisis. Now, the firm is turning its attention to the development of large-scale BTR projects as well. It’s one of several real estate firms that are investing in the BTR space.

Related: Where to Find the Greatest Upside in the Booming Build-to-Rent Sector

GTIS’s decision to pursue BTR opportunities was driven by the recognition that it was competing not only with other investors when looking to acquire homes to add to its portfolio, but also with individual homebuyers, who rarely stand a chance against large institutional buyers with deep pockets.

“Not only do we risk crowding out potential homebuyers, we also feel that the investment returns in acquiring existing homes have compressed significantly,” Sun says. “That was a key reason why we pivoted our strategy to BTR, where we are building new housing supply for renters and where the development yields remain very attractive relative to acquiring existing homes.”

Construction of SFR units intended for the rental market has increased steadily over the past decade. In 2020, 42,000 purpose-built SFR homes began construction nationally, representing roughly four percent of all single-family housing starts. While that number makes up a relatively small share of all new housing, it represents a record, according to the Harvard Joint Center for Housing Studies. The previous high occurred back in 2003, with 47,000 purpose-built SFRs.

“The number of traditional multifamily lenders that are transitioning to also do (BTR) is staggering,” says Keaton Merrell, managing director of capital markets at commercial real estate finance firm Walker & Dunlop and the firm’s resident BTR expert. “But it is also the traditional homebuilders and investors looking to aggregate (BTRs) that are jumping into the space.”

Prior to the onset of the COVID-19 pandemic, BTR communities in the U.S. already had a 97 percent stabilized occupancy rate nation-wide, according to John Burns Real Estate Consulting. Young, modest-income families with children are more likely to live in these units because of the space they provide (compared to new multifamily rentals) and their relative affordability (compared to new single-family homes for sale), according to Alexander Hermann, a senior research analyst with the Harvard Joint Center for Housing Studies. With the pandemic, the craving for more space and access to a backyard has only grown among people who found themselves stuck in small apartments with no outside space.

Lack of housing in every market

“I have been to Georgia, Alabama, Tennessee, New Mexico and Texas over the last two months, and there is a common theme in every market: a lack of housing,” Merrell notes. “BTR helps address the housing shortage and a lot of people would prefer to rent a home today as opposed to purchasing one.”

Earlier this year, Avanta Residential broke ground on 216 rental homes at The Colony, a 2,300-acre master-planned community near Austin, Texas. The for-rent neighborhood will include community amenities such as a clubhouse and pool, walking trails with fitness stations, open play areas and playgrounds.

El Paso-based Avanta is the single-family rental affiliate of Hunt Companies, which first entered the BTR business in the late 1980s and then again in the 2000s. Avanta is Hunt’s third shot at new project, according to the Jim Dobbie, president of Avanta.

“The long-term trends for BTR are very solid,” Dobbie says. “Millennials are entering the family-formation stage—getting married and having babies. They need a little more space, and they’re looking for good school districts, and to get all of those things, they need to move out to the suburbs.”

Dobbie points out that most urban infill multifamily projects that have been built over the last decade don’t work for young families. Likewise, they don’t tend to work for downsizing baby boomers and empty nesters.

“Those folks are interested in homes for rent, especially newer homes for rent,” Dobbie says. “They’re looking for a ‘lock and leave’ lifestyle that they can’t have with homeownership.”

From multifamily to BTRs

The typical U.S. homeowner with a mortgage living in a new single-family home spends $2,208 per month on their housing. That’s 33 percent higher than the $1,666 per month renters in new SFR units spend on rent and utilities.

“Ultimately, there appears to be a strong need for homes with privacy and space that can be rented instead of bought,” says Kory Geans, chief investment officer at Middleburg Communities. “SFR construction will fill that need, expand the overall housing supply and make it much more diverse.”

Middleburg Communities is a traditional multifamily developer. Since 2004, the firm has acquired and developed more than 21,000 apartment units. Last fall, however, it launched a new initiative called The Hamlet to satisfy the growing demand for BTRs in high-growth southeastern markets.

In mid-June, Middleburg Communities closed on its fourth SFR development, The Hamlet at MidCity in Huntsville, Ala. The project will include more than 200 two- and three-bedroom single-family detached cottage style homes and 36 one-room duplexes built around shared open green spaces. Residents will also have access to a resort-style pool, fitness center, clubhouse, dog park and pet spa, grilling stations, firepits and package lockers.

Middleburg Communities expects to build 30 to 35 SFR communities over the next few years. It anticipates demand will come from current apartment residents, as well as single-family home renters and would-be-buyers.

The company even trademarked a tagline: “This is Home Rentership—all the comforts of home ownership with the ease and flexibility of renting.”

One of the appeals of BTR is that it provides much needed housing for a segment of the population that homebuilder Jim Jacobi calls “the missing middle.”

“There is a huge lack of supply of homes for the missing middle, creating a surplus of rental demand for product in this niche,” Jacobi says.

Sweetwater Springs had a waiting list of 50 people before opening the community for leasing, according to Jacobi. “Homes are renting so fast it is unbelievable,” he says. “The first two buildings of 28 townhome units were all pre-leased before construction was completed.”

Renting has become the only options for many Americans that have been priced out of the single-family for sale market, Jacobi says. By 2023, he expects to have built 400 to 500 SFR units for his own portfolio.

“I believe it would be a mistake for [investors] to not diversify their investments with SFR,” Jacobi says.