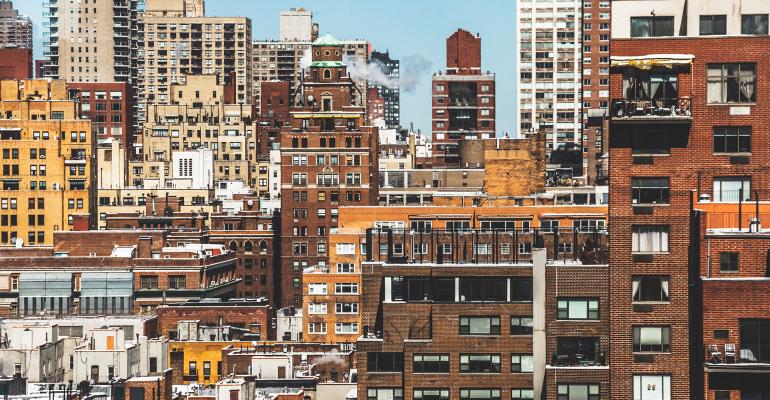 All in the Multifamily: Apartment Boom Continues

The commercial real estate markets have provided more questions than answers these last few years. Whipsaw price changes in equity REITs demonstrated the evolving thinking of investors as demand shock was followed by the government and Fed’s shock and awe style interventions in the economy. Much industry chatter focused on the future of office, retail, and hospitality properties as well as those surrounding businesses that benefit from their success. One thing most Analysts can agree on is that multifamily has been outperforming for years and investors continue to clamor for exposure, creating highly favorable debt alternatives and high property prices.

The outlook for the asset class is buttressed by a growing economy, nationwide housing shortage, and supply chain issues, which are making it impossible for supply to keep up with demand. The flip side of that equation is fewer affordable housing options for communities across the country and continued necessity for policymakers to ease costly regulatory burdens which constrain supply. While there aren’t loud calls being made about bubbles nor anticipated multifamily performance problems, the commercial real estate industry’s fortunes are being increasingly tied to multifamily.

CBRE’s 2021 midyear outlook explains, “multifamily real estate was relatively resilient during the 2020 recession, with a smaller drop in investment volumes than most other mainstream asset types. The sector’s investment appeal was characterized by its solid market performance, with low vacancy rates and high rental collection rates. Despite the negative impact of lockdown measures and remote working arrangements on many urban/CBD properties, investment volumes remained strong in H1 2021, with increased pricing in many regions.”

Related: A Huge Demand for Housing Leads to a Spike in Multifamily Conversions

As with most successful investment opportunities in 2021, the public sector’s support is abundantly present. The Federal Housing Finance Agency (FHFA) will allow Freddie Mac and Fannie Mae to purchase up to $78 billion each in loans to apartment properties in 2022. But at least half of those loans must be to communities with rents affordable to low- and moderate-income households. The new caps are just a little higher than FHFA’s old caps, which allowed Freddie Mac and Fannie Mae to purchase $70 billion each, as detailed here.

A look at some numbers and analytical perspectives is instructive to demonstrate these points but also in thinking about where multifamily is heading in 2022 and beyond.

Transaction volume has accelerated considerably. Real Capital Analytics reports here, “Commercial property deal volume surpassed $450 billion for the first three quarters of the year, a level never before reached. The last time deal volume approached this mark was 2007, when entity-level deals in the office and retail sectors bolstered total activity. In the third quarter of 2021, the apartment and industrial sectors constituted some 60 percent of total activity. It was a record quarter for apartment deal volume, with the quarterly total higher than the average annual totals for the sector from 2008 to 2011.”

Lending volume has accelerated considerably. Commercial and multifamily mortgage bankers are expected to close $578 billion of loans backed by income-producing properties in 2021, a 31 percent increase from 2020's volume of $442 billion, according to a forecast released by the Mortgage Bankers Association (MBA) in August.

Total multifamily lending alone, which includes some loans made by small and midsize banks not captured in the overall total, is forecast to rise to $409 billion in 2021—a new record and a 13 percent increase from last year's total of $360 billion. MBA anticipates additional increases in lending volumes in 2022, with activity rising to $597 billion in commercial/multifamily mortgage bankers originations and $421 billion in total multifamily lending.

Fannie Mae’s Kim Betancourt notes here, “We believe that the national multifamily vacancy rate will decline in 2021, but not as much as the current trajectory might suggest. That’s because new completions are expected to outpace demand, at least over the next 12 to 24 months. While we expect continued demand for multifamily rentals, newly delivered supply is expected to remain elevated throughout the year, keeping estimated vacancy levels relatively stable. We anticipate that the U.S. national multifamily vacancy rate likely will be within an estimated range of between 5.25 percent and 5.75 percen by year-end 2021.”

What potential development(s) could put a pause on the bullishness and strong performance in the multifamily sector?

“Certainly, an increase in interest rates would change the dynamics of lending and valuation,” says Meghan Czechowski, managing director and the head of valuation for Apprise by Walker & Dunlop. Further, the continued growth in rents could stagnate if meaningfully supply comes to markets in the coming years or tenants push back as rent levels become more unsustainable.

On the question of housing supply, one analyst bucks the oft-cited narrative of national undersupply by asserting that there is in fact a downward trajectory of population growth and household formation.

For now, a golden age continues for multifamily with record transaction volume, low cap rates, and attractive rent growth delivering strong returns. That said, commercial real estate is a cyclical business and phrases like, “this time is different” often get uttered but don’t age well. While the multifamily market continues to grow and deliver strong investment value, lenders are adding more multifamily exposure as a percentage of their overall books of business.