/sites/all/themes/penton_subtheme_wealthmanagement/images/logos/footer.png
Recent
Recent
Bracing for Like-Kind Exchange Reform
Aug 04, 2022
11 Must Reads for the CRE Industry Today (Aug. 5, 2022)
Aug 04, 2022
Some Institutional Investors Are Pulling Out of the Industrial Sector. Here’s Why.
Aug 04, 2022
Airbnb Falls as Summer Bookings Boom Undercut by High Expectations
Aug 04, 2022
Featured
The 10 Best and 10 Worst States in Which to Retire in 2021
Jul 15, 2021
Poll: 15 Classic Books on Investing and the Markets
Apr 03, 2020
Fifteen Must-Listen Business Podcasts for Advisors
Aug 14, 2020
Celebrity Estates: Jay Leno and Planning for Classic Car Collections
Feb 22, 2022
Schwab IMPACT
brought to you by 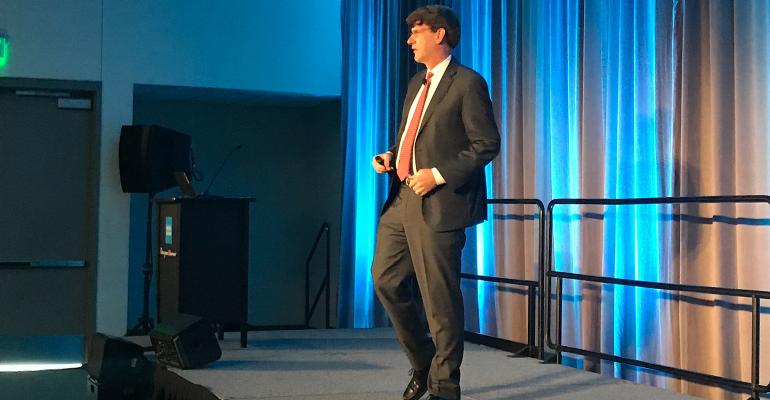 The markets tend not to overreact to most turbulent political and social environments, said Michael Townsend, Schwab’s head of legislative and regulatory affairs.

While investors may be anxious about current national and international headlines, from U.S./China trade tensions and Brexit to the impeachment inquiry of President Trump, the market has tended to remain stable, and advisors need to be steadfast in helping worried investors stay the course, said Michael Townsend, the vice president of the office of legislative and regulatory affairs for Charles Schwab.

“Now we have the impeachment inquiry, and this is where I think investors, when they’re anxious, tend to overreact to the news,” he said, during a presentation at the company’s annual IMPACT conference in San Diego. “They get emotional and react to something or they get frustrated and react to something and they want to make some drastic move. And I think a lot of you spend a lot of your time trying to talk people off that ledge.”

Townsend stressed that the market tended not to overreact to most turbulent political and social environments. For example, the S&P 500 had dropped during only four previous election years, two of them being when the tech bubble burst in 2000 and the market crash of 2008.

Like other presenters at IMPACT, Townsend said a trade deal between China and the United States was likely, though he guessed the most challenging issues between the countries would go unaddressed. He also said the skyrocketing (and bipartisan) unpopularity of tech companies could have an impact on returns, though he said it was unlikely that the government would break up a company like Facebook.

Related: Schwab IMPACT: As Trade Goes, So Does The Economy

“I think clients don’t understand a lot of time how invested in these companies they may be because of their huge presence in mutual funds or exchange traded funds,” he said. “These are highly successful companies in many ways; I don’t think they’re going to crater because of all these investigations, but I do think it’s something to watch.”

Townsend also detailed recent regulatory news, citing the encroaching implementation date for Regulation Best Interest. He also noted the SEC’s recent move to amend their advertising and solicitation regulations for firms. He felt the commission hoped to modernize the rules to fit current realities, and while immediate reactions from industry members he’d spoken to were positive, everyone included the caveat that they were still digesting the changes.

Townsend also noted that the newly appointed U.S. Department of Labor Secretary Eugene Scalia would not recuse himself from involvement in crafting the revised DOL fiduciary rule after its previous incarnation was struck down in court by parties Scalia helped to represent. Nevertheless, Scalia’s appointment made it unlikely to him that the new fiduciary rule would be released before the new year, Townsend said.

For the presidential race, Townsend again urged caution, mentioning that despite the “horse-race” tenor of the coverage, no one would be casting a vote in a presidential primary until Feb. 1. He said that it was even more difficult to prognosticate about potential legislation, including proposed initiatives like wealth taxes and taxes on unrealized capital gains.

“Again, you’ve got to get these across the finish line. These are paper proposals meant to win a Democratic primary, and there’s not Democratic unanimity on any of these in Washington,” he said. “If Democrats win (the Senate), it’ll be something like 51-49 or 52-48, and you have Democrats in red states very uncomfortable with things like wealth taxes.”