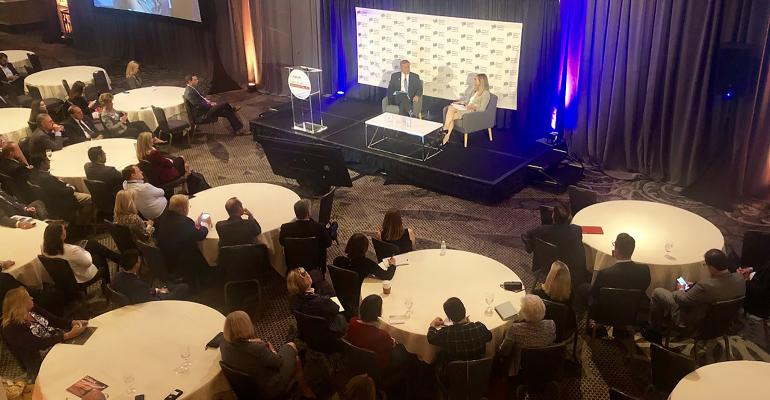 At FSI's 2019 Forum, SEC Chief Counsel of the Division of Trading and Markets Emily Westerberg Russell addressed how broker/dealers should think about conflict-of-interest disclosures, and whether the SEC would preempt more stringent state rules for brokers.

At a question-and-answer session during the Financial Services Institute’s 2019 Forum, Emily Westerberg Russell, the chief counsel of the Division of Trading and Markets at the Securities and Exchange Commission (SEC), told broker/dealers that despite some industry skepticism that the new rules governing broker and advisor standards for clients have teeth, broker/dealers need to take the rollout seriously and not count on delays in its implementation.

“We are now three months past the adoption of the rule but only nine months away,” from implementation, Russell said during a conversation with Dale Brown, CEO of broker/dealer trade group FSI, at the Mayflower Hotel in Washington, D.C., Monday afternoon. “You should be considering an inventory of your business and thinking about the conflicts you have. Will you address them? Mitigate them? Eliminate them?”

After months of preparation, negotiations and a public comment period, SEC commissioners approved the Regulation Best Interest rule in a 3-1 vote on June 5, with implementation scheduled for June 30, 2020. When introducing Russell, Brown stressed that the FSI had long advocated for a uniform best interest standard; now that they’d allegedly gotten what they wanted in Reg BI, Brown said it would be “imperative” for FSI members to help Reg BI work (though there is disagreement among many as to whether the rule actually creates a uniform standard or whether it creates an appropriate fiduciary standard for brokers).

Russell reiterated the four core obligations at the heart of the new rule, including disclosure, care, conflict of interest and compliance, and agreed with Brown’s assertion that the rule imposed a number of changes for broker/dealers. She highlighted key shifts, including how the rule would apply to account recommendations. Additionally, brokers must now consider costs when making a recommendation and must also consider “reasonably available alternatives” that would better fit their clients’ needs. Finally, she stressed that conflicts of interest that may previously have been addressed through disclosure alone may now be better handled through mitigation or elimination.

However, she believed the different types of conflicts that exist offer firms multiple avenues to address the issues.

“Conflicts exist on a spectrum. Not all conflicts are the same,” Russell said. “It’s a balancing act that can be frustrating, but also freeing to firms. You can tailor it to your business.”

Brown also asked Russell about the role that states should play in creating their own conduct standards, noting that the SEC chose not to explicitly pre-empt states from creating and passing their own rules.

States like New Jersey, Massachusetts and Nevada have pressed forward on creating their own standards in response to what they felt was an inadequately stringent final rule from the SEC. Russell largely reiterated the language in the bill pertaining to preemption, arguing that “the preemptive effect will be determined in judicial proceedings.”

Even so, earlier today several state attorneys general filed suit against the SEC, arguing that the new rule failed to create a uniform fiduciary standard as obligated under the Dodd-Frank Act.

At the close of the discussion, Brown asked Russell about the implementation deadline; could any delays of the June 30 date be possible in the months to come?