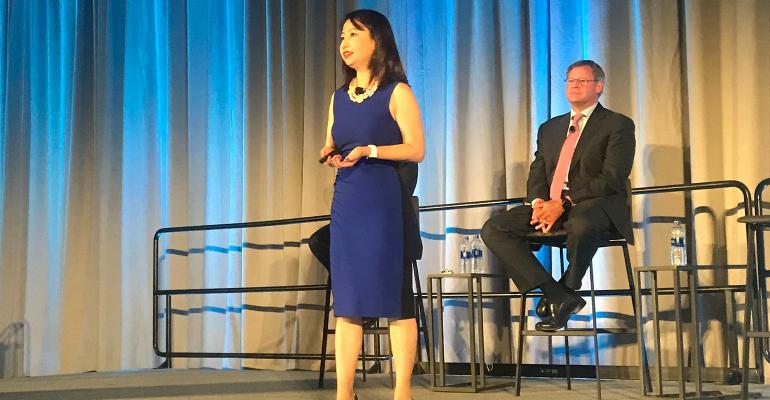 Investment strategist Andy Rothman said he was "90% sure" there would be a trade deal between the U.S. and China by month's end during the discussion at the Schwab IMPACT Conference in San Diego.

Misconceptions surrounding China’s ongoing trade skirmishes with the United States, as well as broader misunderstandings of the country’s growth, can lead to missed opportunities for investors and advisors alike, according to a presentation at the Schwab IMPACT conference from Matthews Asia, an independent firm with an emphasis on (and advocacy for) investment in China and throughout the region.

Andy Rothman, an investment strategist with the firm, surmised that the particular contents of a trade deal between the U.S. and China did not matter, as its greatest effect would be stabilizing a market uncertain about the future.

“The biggest consequence of the tariff dispute is uncertainty. Business investment has collapsed in the United States and in China it has slowed down considerably,” he said. “Not so much because of the impact of tariffs directly, but people are really worried that the tariff dispute might blow up into a full-blown trade war between the two largest economies in the world.”

The numerous presenters from Matthews Asia, including Portfolio Manager Joyce Li and Portfolio Straegist David Dali, stressed that China’s formidable economic performance meant the U.S. should not overstate the leverage it has in trade disputes; net exports in China were less than 1% last year, compared to 10% a decade ago. Rothman also cited formidable trends in consumer spending; this was the eighth year in a row that consumer services was the largest part of the Chinese economy.

Additionally, retail sales in the country have grown from $473 billion in 2000 to $5.7 trillion last year, and Rothman stressed that the change makes it a considerable asset for investors to consider.

In a video preceding the discussion, Rothman said investors who perceive investments in the country as doing so in a Communist regime are thinking in an outdated model, arguing that instead investors are participating in a "change process." He also argued the length and scale of the Hong Kong protests did not necessarily mean that the Chinese government would inevitably (and harshly) crack down on protestors (some experts, including Perth Tolle, one of WealthManagement.com's Ten to Watch in 2020, argue that clients can avoid investing in China if the government’s policies and practices do not correlate with their own beliefs by using index funds tailored to account for values-based priorities).

According to Dali, active management is the best approach for capitalizing on Chinese investment, compared to utilizing the Global Emerging Markets group or taking the ETF route. With two particularly premiere ETFs, one includes the 50 largest Chinese companies traded in Hong Kong, but not those traded in the U.S., while MSCI’s ETF does not include listings of Chinese local shares, which Dali argued cut the ETF’s options in half. Additionally, Dali noted that about two-thirds of Chinese stocks are not analyzed at all, and only 8% are covered by five or more analysts (in contrast, he said only 8% of U.S. stocks were not covered). Dali called it a “hunting ground” for prescient active managers.

Li also stressed that consumption and innovation within China were creating new opportunities, along with more sophistication in the country’s corporate governance. Additionally, emerging cities with significant populations were becoming key drivers of growth; by 2030, cities like Quanzhou (population 8 million) or Anyang (population 5 million) could see the majority of the country’s middle class growth. Li recalled a recent trip she’d taken to her own hometown in August, during the height of U.S./China trade tensions.

“So if you read news headlines at that time, you would think Chinese consumers are struggling, and they’re having a tough time,” she said. “But guess what? That’s not what I experienced in my hometown. Consumption is booming, shopping malls are busy, and people are generally very confident about their life prospects.”