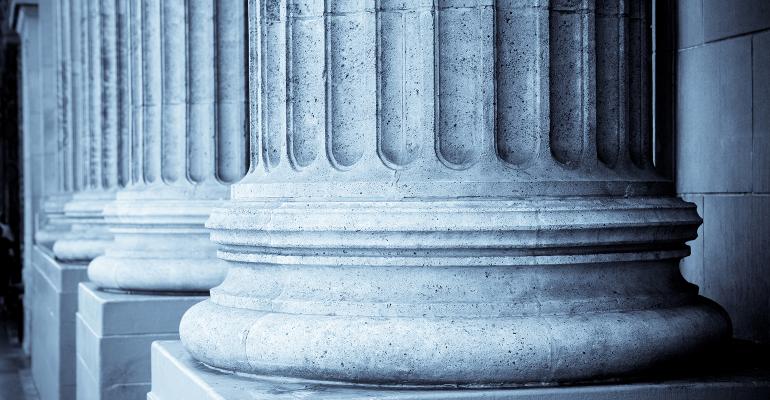 Threats of litigation won't slow states from moving to institute their own fiduciary standards, but the thorny question of whether Reg BI trumps state laws will ultimately be decided in the courts.

Even before the Securities and Exchange Commission released its Regulation Best Interest rule for retail investment advisors and broker/dealers earlier this month, many speculated about forthcoming court challenges, particularly from those who felt the standard did not go far enough.

But as more states take on the challenge of passing their own regulations to enact a stronger fiduciary standard than the one passed by the SEC, there is likely to be an equally strident push from opponents. Already, advocates for a uniform federal standard have submitted comment letters to regulators in New Jersey and Nevada, two states considering their own fiduciary rules.

The critics maintain federal rules trump state securities laws, pointing to the National Securities Markets Improvement Act (NSMIA) of 1996, which, they argue, amended the Securities Exchange Act of 1934 to preclude states from regulating b/ds. The SEC even acknowledged the likelihood of court challenges in Reg BI’s text, stating that “the preemptive effect of Regulation Best Interest on any state law governing the relationship between regulated entities and their customers would be determined in future judicial proceedings based on the specific language and effect of that state law.”

For the nascent fiduciary standards developing at the state level, opponents and supporters alike agree that a court challenge regarding preemption is likely imminent, and any ruling will have an impact on how other states proceed to enact their own regulations, according to Barbara Roper, the director of investor protection for the Consumer Federation of America.

“The issue of NSMIA preemption needs to be resolved,” she said. “It’s never been litigated, and until that’s resolved, you can’t really develop a broader state strategy.”

The Question of Preemption

State regulation of investment advisors was largely codified in the Securities Exchange Act, which gave states the power to regulate b/ds in the pursuit of protecting clients against fraud. But in 1996, NSMIA amended the act to limit states’ ability to regulate b/ds beyond federal requirements in regard to “capital, custody, margin, financial responsibility, making and keeping records, bonding, or financial or operational reporting requirements.”

The question surrounding record keeping is crucial to arguments critics make against state fiduciary standards; in their comment letter on New Jersey’s potential fiduciary rule, the Securities Industry and Financial Markets Association (SIFMA) argued that any enaction of a fiduciary standard on b/ds would require them to institute “new supervisory systems and procedures” exceeding what is required by the Exchange Act. New Jersey regulators say their proposal should not be interpreted as requiring new record keeping rules.

SIFMA's interpretation could make it virtually impossible for states to regulate any conduct of b/ds operating within their borders, according to Ronald Rhoades, director of Western Kentucky University’s Financial Planning Program. In a letter in support of New Jersey’s proposed rule, Rhoades argued that a savings clause included in NSMIA gave states a wide berth on anti-fraud measures, granting states the power to “investigate and bring enforcement actions with respect to fraud or deceit, or unlawful conduct by a broker or dealer.”

Rhoades argued the ambiguity of the savings clause was likely the consequence of congressional compromise, but prior cases had set a precedent that protects states’ ability to protect consumers against fraud, and that could include a b/d's breach of a fiduciary duty.

“That does not mean state securities regulators can change laws that change prospectuses, or other security offerings documentation on a national level, but (NSMIA) wasn’t intended to affect the state’s ability to regulate actions by brokers or investment advisors that relate to fraud,” he said. “To me, that falls clearly within anti-fraud measures, because it was not exempted out in the savings clause.”

“If you were to impose any regulation that affects conduct in any way, that would affect the records kept,” he said. “If that was the case, I can’t imagine any state could enact a rule that affects market conduct. It would mean states couldn’t legislate against fraud anymore.”

Brad Campbell, a partner at the Washington, D.C.-based law firm Drinker Biddle who served in the George W. Bush administration as the assistant secretary of labor for employee benefits, argues that states have the ability to enact regulations, provided the resulting changes in record keeping rules do not exceed what’s demanded of brokers by the 1934 Exchange Act.

“If the complaint is that states do not have enough latitude to run with their own policies, that was the point of the law, to establish a uniform standard,” he said. “It doesn’t mean there can be no change; it just means they can’t go beyond what’s stated by federal law.”

Campbell also noted the New Jersey proposal included language saying that regulations could govern “practices that may be unethical but may not necessarily be fraudulent.” Campbell also argued the New Jersey standard contained an impractical proposal that brokers must offer the "best" option available for clients, which, he argued, would undoubtedly lead to additional record keeping requirements to remain in compliance.

Robin Traxler, the senior vice president of policy and deputy general counsel at the Financial Services Institute, agreed, saying in a statement to WealthManagement.com that new record keeping requirements would be necessary to remain in compliance with the state requirements, and that would in turn violate the preemption concern established by NSMIA.

“Of course, we expect the states may not agree that the rule would create additional record keeping requirements in violation of NSMIA, but there is no way to document compliance with the requirements without extensive documentation and record keeping,” she said. “Therefore, we encourage states to defer to the SEC or align their standards with Reg BI.”

But supporters for state fiduciary standards believe such an argument is an unworkable reading of NSMIA; in a letter to the SEC, the North American Securities Administrators Association (NASAA) argued against SIFMA’s own conclusions on preemption, noting that those conclusions would mean any state law concerning b/ds operating in separate states, such as differing state tax laws, would then be considered "unenforceable."

NASAA also pointed to the savings clause included in the amendments NSMIA made to the 1934 Securities Exchange Act as evidence that Congress intended significant regulatory power to remain with the states.

“The authority to conduct those examinations and investigations was expressly preserved in NSMIA,” the letter read. “Congress included savings clauses to make clear that, notwithstanding the significant changes Congress was making in the federal securities laws, states retained their enforcement authority to police offering frauds and broker/dealer sales practices.”

Campbell considered litigation all but inevitable, agreeing that particular aspects of the preemption question have not been challenged in court. Campbell noted that states had been more proactive in enacting their own measures since the 5th U.S. Circuit Court of Appeals overturned the Department of Labor’s 2016 fiduciary rule last year.

“We haven’t had a clash between state regulators and the federal government, but with the fiduciary rule vacated by the courts, we have states saying, ‘federal regulators aren’t doing enough, and we need to do more.’ We now have a growing clash between the federal government and states in regard to securities,” he said, also asserting that the SEC could not remain silent for long. “As an institution, the SEC is going to have to say federal law preempts states, because otherwise it undermines their purpose.”

Rhoades said he did not believe threats of litigation would slow states from moving to institute their own fiduciary standards, but he agreed that an answer to the question of whether the federal government would preempt state securities laws would come in a courtroom.

“I’d say the states are likely to prevail upon the issue,” he said. “But having said that, anytime you go before a court with an ambiguous statute, the outcome is uncertain.”