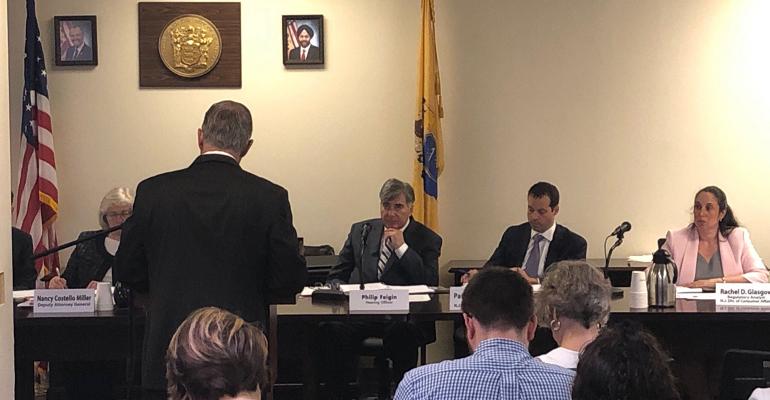 Will the state's proposed rule be a "shot heard round the world" or "effectively eliminate brokerage business in New Jersey?"

The battle lines were drawn largely as expected in front of the New Jersey Securities Bureau in Newark on Wednesday, with proponents of the SEC’s recently passed Regulation Best Interest coming out against the state's controversial financial advisor fiduciary rule proposal and preaching patience, while those who feel Reg BI doesn’t go far enough applauded the bureau for making such a bold proposal.

Micah Hauptman of the Consumer Federation of America noted in his testimony that “Reg BI is politics, rather than policy. It’s meant to seem like change but doesn’t in any appreciable way.”

The Institute for the Fiduciary Standard’s Knut Rostad wondered, “Are there any independent and credible experts who support [Reg BI] and also address critics’ concerns? Not that we can find.” He then implored the bureau that they could be firing "a shot heard round the world."

“We urge you to give Reg BI a chance. The best way to do so is to let it play out. See how it performs,” said Kevin Carroll, SIFMA’s managing director and associate general counsel. “Now is not the time to layer on state-specific fiduciary requirements that add no additional investor protection.”

The daylong debate in New Jersey comes as a result of the Department of Labor's proposed fiduciary rule being vacated by the courts. In the wake of that decision, and the resulting Reg BI by the SEC, individual states, including New Jersey, Massachusetts, Nevada, Connecticut, Maryland and Illinois, have looked into creating fiduciary rules of their own.

Much of the testimony directly addressing the proposal centered on the concept of “best,” be it for middle-income investors, retirees and, particularly, what the heck phrases like “best of reasonable available options” actually mean—and if they’re even possible to define.

Those testifying in favor of the proposal largely expressed their belief that imposing stricter fiduciary standards on brokers and advisors is what’s best for everyone. Investors would be protected from receiving conflicted advice, and advisors' practices would benefit from raising public confidence in financial advice as a whole.

Joseph C. Pfeiffer, speaking on behalf of the Public Investors Arbitration Bar Association (PIABA), explained that of the hundreds of investor cases he’s litigated, all have two things in common: 1) the investor thinks his broker has to put him first; and 2) the firm denies having a fiduciary duty. He attributed this confusion to the current rules, including Reg BI, which he dismisses as “just a slightly better suitability rule.” He said the current rules “create a false distinction between financial advisors and brokers.”

“They’re all advisors," Pfeiffer said. "The terms are meaningless.”

This sentiment was echoed by Evelyn Liebman of AARP New Jersey, who stressed, “As b/ds continue offering financial advice to retail clients, investor confusion only continues to grow.”

Opponents of the rule homed in on the potential consequences of a pair of “best of the reasonable available options” clauses in the proposed rules applicable to securities and fees, respectively. (Found in section (b)21 of the proposal.)

Dennis Cuccinelli of the National Association of Insurance and Financial Advisors (NAIFA), dismissed these clauses. “This wording lends itself to an after-the-fact form of analysis and is so open ended and subjective that any advisor could be found in violation, despite the fact that the advisor acted in the best interest of the client at the time of the recommendation or transaction,” he said.

Kent A. Mason, speaking on behalf of the American Benefits Council and the clients of his firm, Davis & Harman LLP, was less concerned about the dangerous application of hindsight to advisor decision than trying to figure out if it’s even possible to define “best of the reasonable available options” in the first place. He put it bluntly: “What’s the ‘best’ fee structure? Who knows? What’s the ‘best’ security? Nobody knows. Neither are findable.” He joked, “If I could tell you what the best security is, I wouldn’t be here, I’d be out buying private islands.”

The other primary argument put forward by those opposed to the proposal was that, if made final, it would have the opposite effect as intended and would end up hurting the very investors it means to help.

“Imposing an ongoing fiduciary duty [to a brokerage account] would have a seismic negative impact,” SIFMA’s Carroll warned. “It would effectively eliminate brokerage business in New Jersey and completely block access to investment advice from many New Jersey investors.”

Cetera’s Mark Quinn took direct aim at the potential for forced homogenization of investment advice under the rule.

“The approach that the bureau has taken fails to take into account the difference between brokerage and advisory relationships,” Quinn said. He decried the assumption that there’s less conflict inherent in a fee-based relationship than a transactional one as “faulty” and warned that “[The proposal] tilts the floor in favor of advisory, fee-based relationships, even though that may not ultimately be what’s best for the individual investor.”

There was also a third faction in attendance that ultimately came out against the proposal. However, these retirement professionals did so for a completely different reason than the rest of the room—ERISA.

Allison Wielobob, general counsel for the American Retirement Association, explained, “The fiduciary standard imposed by ERISA is the highest available under the law.” And, she expressed concern about how the interaction between ERISA and a New Jersey rule would ultimately shake out.”

Mason agreed, stating that, if passed, this rule should be made fully inapplicable to ERISA plans. Because ERISA extends protection to fiduciaries (plan advisors) but not nonfiduciaries (b/ds), any confusion a state rule may cause about who is or isn’t a fiduciary in that space is highly impactful. “ERISA is meant to preclude such conflicts but is undermined by state action,” he said.

Ultimately, this group voiced a strong preference for a unified federal standard and warned against the potential consequences of creating a patchwork of state rules that don’t necessarily line up with the federal one.

Can’t We All Just Get Along?

If none of these arguments come as any surprise, you aren’t alone. They’re mostly the same ones bandied about for a decade. In fact, frustration with the vitriolic rhetoric is one area where both sides seemed to agree.

UBS' Paul Hatch begged for temperance, explaining, “This isn’t a battle of good and evil. The fact that we oppose the rule doesn’t mean we’re greedy or immoral. In the end we want the same thing everyone does, to best serve New Jersey investors.”

Meanwhile, Rostad also expressed a distaste for what he considers 10 years and counting of the same old song, lamenting the rhetorical divide that separates Reg BI and fiduciary and investor advocates. “Make no mistake,” he warned. “This divide mirrors our national politics. It ought to worry everyone.”

The scheduling of the hearing pushed back the deadline for public comment to Thursday. The bureau is expecting to issue its final decision sometime in the fall. If the rule is made official, it would take effect 90 days after the publication of the notice of adoption.