Following a big reveal at the 2019 T3 Advisor Conference back in January 2019, Edmond Walters’ new estate and legacy planning software, Apprise Labs, has officially opened for business. The broad market launch came after months of waiting, a pause triggered in part by the 2019 sale of MoneyGuidePro parent firm PIEtech to Envestnet and several rounds of development tweaks. The joint venture, led by Walters, alongside Tony Leal, president of Envestnet MoneyGuide and the corporate backing of Envestnet, hinted at its planning capabilities as recently as February’s T3 Advisor Conference.

Now, the wait is over, said Walters.

Apprise Labs is the latest project for the financial planning developer, who rose to prominence as founder of eMoney Advisor in 2000 before selling it to Fidelity five years ago. With financial planning software developers jostling for new business and offering free access to select services, and estate planners hurriedly crafting “panic wills” and organizing virtual client meetings, Walters is counting on steep advisor demand.

The firm began selling licenses to the planning tool about two months ago, he said. “We’re finally past that stage of hiding it,” he added. At T3 Walters expressed concern that competitors might start copying components of the tool.

But the coronavirus pandemic added a complication to closing deals and getting new clients on the tool.

The firm’s sales strategy is to gain industry clout by landing and publicly revealing major enterprise players, he said, then marketing to both “jumbo” and family-office-sized RIAs, which he called the firm’s “sweet spot.”

The software provider had inked a major broker/dealer in March, “with more than 8,000 seats,” and “a group” that was signed to the tool in February. Walters declined to name those firms, noting that he was still awaiting permission from the clients to name them.

“We had 24 cases working right now that are past the fourth or fifth meeting—down to pricing and final approval—when this virus broke out,” he said. “They’re all north of several thousand users.” Two of them have given verbal approval to proceed during the pandemic, he added.

Meanwhile, the firm’s website now lists the features of the tool: Income Studio, Lifestyle Studio and Legacy Studio. A few weeks ago, it just listed generic contact information and noted that the tool was in progress. 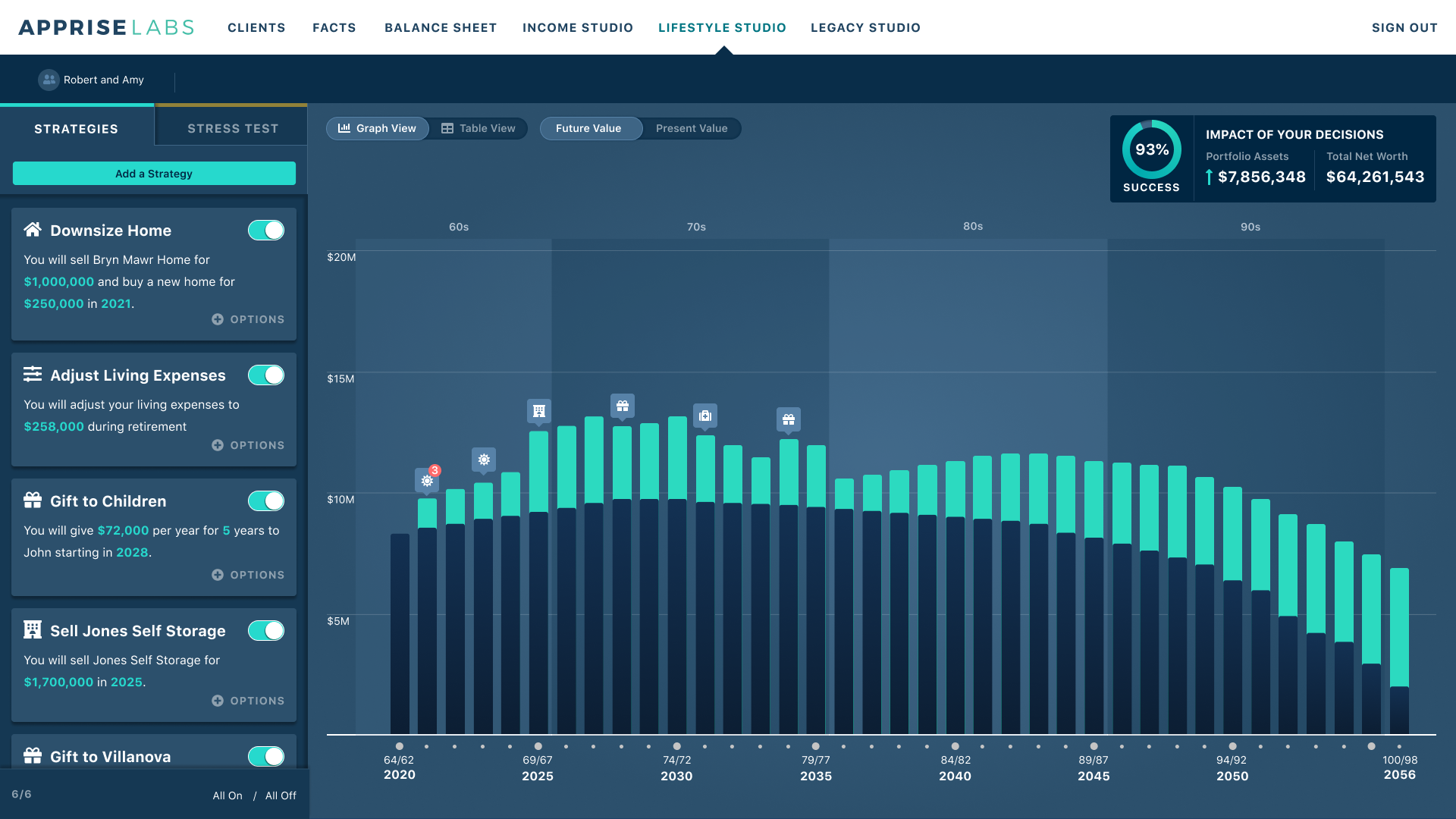 The "Lifestyle Studio" feature within the Apprise Labs estate and legacy planning tool.

Apprise Labs’ technology is meant to pick up where MoneyGuide leaves off, said Walters. For advisors with clients in the 40s–50s age range, MoneyGuide is the right tool to use, he explained. Once wealthier clients reach their 60s and onward, Apprise Labs is better positioned.

While MoneyGuide is built around the “guide” in its name, Apprise Labs’ tools are designed for exploration and interaction, said Walters. “When you have a meeting in person with a husband and wife, you need to get them out of their seats,” he explained. “The future of people receiving advice is going to be participating in the advice; not just being told what to do."

But Apprise Labs has also had to react to the coronavirus pandemic.

The firm’s model relied on in-person meetings—and an oversized internet-connected touchscreen TV—as an opportunity for its software to shine. The idea was that advisors would invite clients into their office, present Apprise Labs’ legacy and estate planning on the jumbo touchscreen TV and facilitate interactions between spouses. The advisor would then step into the conversations swirling between partners, demonstrating a steady hand and the technological prowess that he or she could offer, while calmly discussing the clients' financial planning for their sunset years.

That big-screen model is effectively neutralized by pandemic-necessitated remote working and social distancing, presenting a problem for Walters.

“Older clients are still intimidated by a Webex with an advisor,” he said. "They're not comfortable setting it up." So instead of relying on a videoconference, Walters is incorporating co-browsing into the product, so that advisor and clients can virtually pass the mouse (and planning) back and forth.

It’s not just co-browsing that Apprise Labs is pulling in from outside its Envestnet partnership.

Most notably, the software features an integration with Plaid, now owned by Visa, despite Envestnet owning its own data aggregator, Yodlee. That’s because Plaid, which purchased wealth management–focused aggregator Quovo, does such a good job aggregating investments, said Walters. “Plaid does a little better than Yodlee, but not really much better,” he said. He’s also considering alternative asset aggregation using Addepar.

Outside of aggregation, TrueProfile (an application owned by Capital Preferences) has been tapped to measure risk tolerance, because it excels in gauging a client’s true propensity for loss and growth, said Walters. “The marketplace we’re going to be in…[clients] don’t want to chase the market,” he added. “They believe in a balanced portfolio" that protects assets, rather than looks to aggressively grow them.

While launching in the midst of the coronavirus pandemic has presented its share of problems, ultimately it will prove a boon for advisors focused on estate and legacy planning, said Walters.

“I looked at the negative of the pandemic and said, for estate planning, ‘This is a positive,’” he explained. “Advisors need to jump on this when it is over, get in front of their clients and talk about these things. A lot of people are superstitious, and they don’t want to talk about estate planning; because they’re afraid that if they talk about it, they’ll die.”

When the dust settles, and the pandemic is over, the feeling among clients of safety and health not having a price tag will last for only about two months, he said. As soon as the coronavirus pandemic is over, advisors need to show their clients "a dress rehearsal" of what would have happened, he said. “No tool can do it all. A lot of estate planning and investment planning is an art. We’ve got your back on the science.”