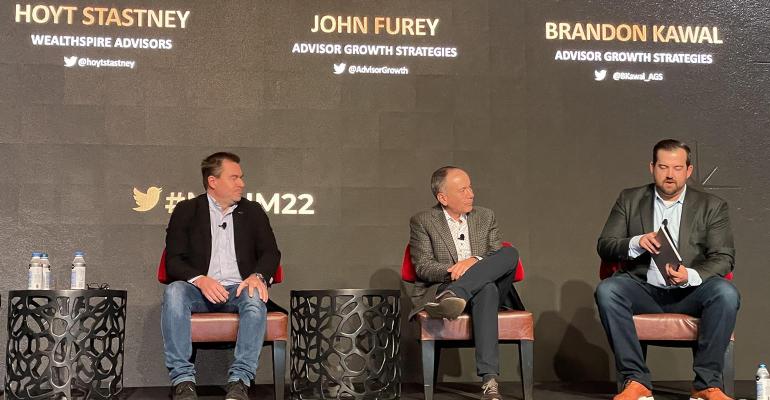 At the MarketCounsel Summit, executives with Advisor Growth Strategies questioned the certainty that rising interest rates will result in a cratering of M&A activity.

The “fundamentals are still there” for buyers and sellers for M&A activity to continue, despite the cost of deals rising because of ongoing interest rate hikes, according to executives with Advisor Growth Strategies.

“A lot of people believe ‘interest rates up, M&A grinds to a halt,'” Managing Partner John Furey said in an interview with WealthManagement.com during the annual MarketCounsel Summit, taking place this week in Las Vegas. “And that’s not going to happen.”

Related: Automation vs. Human Advice: Which Will Win Out?

In a panel discussion on shifting trends in deal structures and in a subsequent interview, Furey and Advisor Growth Strategies Principal Brandon Kawal spoke about the impact of the hikes, as well as the changing dynamics between buyers and sellers as the industry faces its new normal in the wake of the COVID-19 pandemic.

According to Kawal, though buyers understood the cost of capital had increased, it wasn’t yet materially impacting deals.

“I think the tone right now is ‘we’re going to have to deal with it,’” he said. "'It’s not going to change our appetite for doing transactions, but we need to be realistic around how we do transactions.'”

But Kawal said the firm saw increasing selectivity among buyers toward sellers. According to preliminary results from an Advisor Growth Strategies survey still in progress, firms expected to close nine deals in 2023, with 65% saying they’d seen a year-to-year boost in inquiries from sellers. In total, buyers were passing on about 60% of offered deals. While the percentages hadn’t drastically shifted, Kawal said the total number of potential deals had jumped.

“They’re saying, ‘if we’re going to pass on 60% of deals moving forward, on an absolute basis, that’s just more deals we’re going to walk away from,” he said. “If a lot of buyers are planning to do the same amount as they were in the past, but there’s more sellers looking, it just means they're going to be more selective.”

The landscape, particularly for sellers, changed in just a year’s time, with the recent market volatility and interest rate hikes accelerating the shift, according to Kawal. A year ago, he argued, a firm could have modest, organic growth, with some investment in their team and business, and they would have attracted buyers’ interest.

But buyers looking to hedge against the rising cost of capital and market swings now want more organic growth from sellers. Hoyt Stastney, a general counsel and head of M&A at Wealthspire Advisors, agreed times had changed since 2021.

“It was an incredibly frothy market, and you had to look at a lot of deals and really embrace everything that was on the table if you wanted to get a deal done,” he said.

To Furey, the terms of a deal a year ago could mean a seller received 70% to 80% of a deal at closing, and now things were hewing closer to 50%.

Arthur Ambarik, the CEO of Perigon Wealth Management, said while market volatility was changing deal structures, he wasn’t finding it changed buyers’ selectivity or finding good matches. Instead, Ambarik found deals were tending to take a bit longer, but overall firms in the midst of the M&A process were unlikely to bail and restart, especially if the fit seemed to work overall.

When faced with changing deal structures in the face of dipping markets and rising rates, Ambarik said sellers were having a measured reaction.

“I don’t think they like it, but I think they understand,” he said. “That’s the business we all chose to be in."