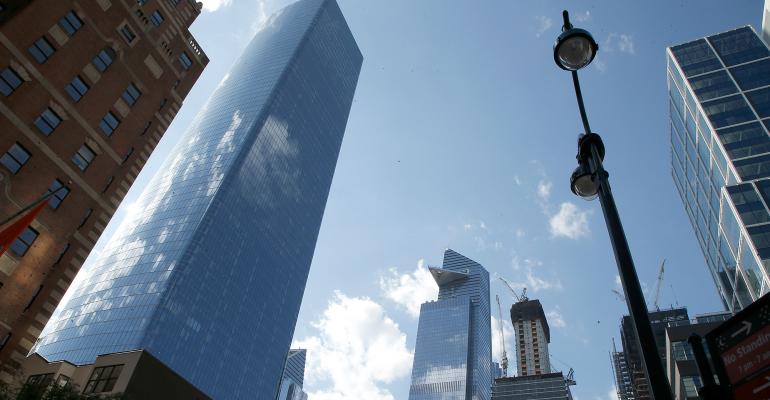 John Lamparski/Getty Images
Blackstone was in advanced talks with a venture led by Brookfield Asset Management to buy a 49 percent stake in One Manhattan West (L).
Property Types>Office

Institutional investors are on the hunt for class-A office buildings and they are not underpaying.

The last few weeks of 2021 saw a flurry of big office towers being snapped off the market, even as the Omicron wave was once again scrambling tenants’ planned returns to the office in January.

As the year closed, Blackstone was in advanced talks with a venture led by Brookfield Asset Management to buy a 49 percent stake in One Manhattan West, a 2.1-million-sq.-ft. office building in New York City that opened across the street from Moynihan Train Station in 2019, The Wall Street Journal reported. Valuing the building at more than $2.85 billion, the deal would mark one of the highest prices on record for a New York City office property. The building is 90 percent leased to tenants including the National Hockey League and Accenture PLC.

Related: Omicron Puts Back-to-Office Plans on the Backburner Once Again

At about the same time, a venture lead by investment firm Oak Hill Advisors agreed to buy 110 North Wacker Drive, a 1.5-million-sq.-ft. office building in Chicago, from the Howard Hughes Corp. for more than $1 billion. That price would be the highest paid for a Chicago property since the start of the pandemic, The Wall Street Journal noted.

And Regent Properties, a Los Angeles-based real estate developer, was in negotiations to acquire Trammell Crow Center, a landmark 1.2-million-sq.-ft. office tower in downtown Dallas, for $645 million. The building was completed in 1985. It is 90 percent leased, with tenants including Goldman Sachs and Orix USA, according to Commercial Observer.

All in all, the fourth quarter of 2021 witnessed some of the largest office sales since the start of the pandemic, mostly driven by institutional buyers. “More of the institutional type capital expanded their exposure to offices over the last year,” says Jim Costello, chief economist and senior vice president with New York City-based real estate data firm Real Capital Analytics (RCA). According to RCA data, nearly half of all office buyers in 2021 were institutional investors or REITs, while private investors accounted for 36 percent of office acquisitions.

Year-to-date through November, the most recent period for which data is available, office investment sales volume in the U.S. reached $104.4 billion, an increase of 45 percent compared to the same period in 2020, according to RCA. For the month of November, the year-over-year increase was even more drastic at 82 percent, totaling $7.8 billion in sales for the month. What’s more, these deals didn’t appear to be closing at deeply discounted pricing. RCA’s Commercial Property Price Index (CPPI) for office properties showed a 4.0 percent increase for the three-month period ending in November, a 14.3 percent increase for the year and a 21.1 percent increase for a three-year period—starting before the pandemic began. However, prices for office buildings in Central Business Districts (CBDs) have been rising much more slowly, by 3.6 percent for the year ending in November, compared to office buildings in the suburbs, which experienced a 15.1 percent increase. (In recent months, that gap has narrowed significantly, to a difference of 120 basis points for the most recent three-month period and 10 basis points in November).

There still is a lot of uncertainly around the future of the office sector due to the pandemic-influenced switch to remote working for many white-collar professionals and the repeated setbacks for companies trying to come back to the office at large scale. But this uncertainty hasn’t killed investor appetite for high-quality office assets, according to Blair Coulson, vice president and senior credit officer for structured finance with Moody’s Investors Service. He notes that many of the biggest office properties that have traded recently share two characteristics—they offer high quality office space and have either been recently completed or significantly renovated. These are the types of properties investors are focused on because tenants prefer them.

“A lot of the value players are betting on a big comeback, but for specific office profiles,” says

Russell Ingrum, vice chairman of capital markets with real estate services firm CBRE. The reason is because these buyers believe class-A office properties will recover faster than those offering commodity space, he notes.

As a result, there are indications that coming out of the pandemic, pricing for the highest quality office buildings is increasing, according to Coulson. “We have seen prices and appraisals go up for very strong properties,” he says. For example, the $2.85 billion valuation for One Manhattan West, the office building Blackstone is in negotiations for, would mark a 12.9 percent increase from its valuation in August 2020, Coulson notes. Ingrum agrees that asset pricing on recent office deals has been consistent with pre-pandemic valuations, though it can vary by market—Seattle and Austin, for example, are seeing higher pricing than San Francisco. Investors are betting on an eventual office comeback, he says: “We are mostly seeing a comingling of closings in funds, foreign investors and a lot of private/1031 investors.”

While no one knows for sure when or in what way white-collar workers will return to the office for good, there are positive signs that both corporate occupiers and real estate investors are committed to a future with in-office work, according to Coulson. Although some office tenants have downsized their spaces recently upon reaching lease rollover dates, others are committing for the long term, including technology, life sciences and financial services companies.