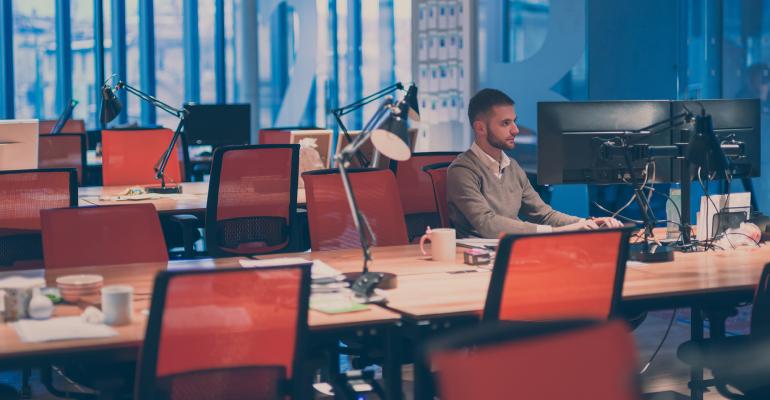 Omicron Puts Back-to-Office Plans on the Backburner Once Again

In addition to disrupting winter holiday celebrations around the globe, creating massive staff shortages, causing the cancellation of thousands of flights and making it challenging to keep schools open, the Omicron variant has once again set back the clock on a large-scale return of workers to offices.

Many companies that have remained remote for the past 18 months or allowed their employees to come into the office on a voluntary basis planned to begin a full return in January 2022, after already postponing a Labor Day return in September because of the Delta variant. But the arrival of the Omicron variant, which current data suggests is milder than Delta but is considerably more contagious and excels at evading protection against infection offered by both vaccines and prior illness, has thrown a wrench into those plans as well.

With many corporate occupiers making vaccination against COVID-19 mandatory, a substantial number of workers began returning to the office in the last few months of 2021. By Dec. 1, office occupancy nationally edged to about 40 percent, according to Peter Miscovich, New York City-based managing director of strategy and innovation with commercial real estate services firm JLL. What percentage of workers came back to the office varied by city and region, he notes, with recent occupancy averaging 25 percent in San Francisco and 37 percent in New York City, but up to 60 percent in cities in the Southeastern U.S. with fewer restrictions and markets with lower infection rates.

In fact, the fourth quarter showed positive trends for the office sector even in markets like New York, which has been slow to recover from the pandemic. Demand for new office space in the city rose by 20.8 percent compared to the third quarter and by 3.3 percent compared to the fourth quarter of 2020, before the pandemic began, to total 9.3 million sq. ft., according to a report from commercial real estate services firm Savills. Average asking rents rose for the first time in eight quarters, to $76.03 per sq. ft. (they still remained 9.4 percent below their pre-pandemic level). Among notable deals signed in the fourth quarter was a 145,010-sq.-ft. new lease by Microsoft at 122 Fifth Avenue and a 191,2017-sq.-ft. expansion by Bloomberg at 919 Third Avenue.

In San Francisco, fourth quarter leasing volume rose to 1.2 million sq. ft., a significant improvement over the low point of 0.2 million sq. ft. in the fourth quarter of 2020. Class-A asking rents rose only slightly year-over-year, to $75.92 per sq. ft. from $75.66 per sq. ft. There have been a number of new deals signed by companies including eBay, Tempo and Twilio, but these have largely been subleases rather than direct leases.

It’s unclear at the moment how long the decline in physical occupancy will last. Tech giants Apple and Google, for example, delayed their planned large-scale office returns until an indeterminate date in the wake of Omicron (both companies already had workers in the office who were coming in on a voluntary basis). Lyft is allowing its workers to delay their return until 2023 if they choose, though the company was planning to reopen offices in February. In New York City, where Omicron cases exploded in late December, financial giants that mandated workers return to the office in the summer, including Citigroup and Morgan Stanley, are allowing employees to work remotely again. JPMorgan told its staffers they can work remotely this month as well, though they are expected back in the office by February, with many experts predicting the Omicron peak will be over by mid-January and potentially even sooner in New York, where the wave started earlier than in the rest of the country. And this week, Goldman Sachs became the latest New York-based financial firm to ask employees to work from home for the next two weeks. (In highly vaccinated New York City, which was also hard-hit during the first wave of COVID-19 in March 2020, the explosion in cases has not resulted in a corresponding explosion in hospitalizations. A lot of the damage caused by the current variant has been in disruptions to daily life and essential services and in temporary business closures as people take time to recover and isolate rather than in a high incidence of severe illness and deaths.)

But the rapid spread of Omicron is causing physical office occupancy to drop nationwide, according to Miscovich. Many of JLL’s major financial services, media and technology clients have rethought their plans to reopen their offices in the new year. “They are taking a cautionary approach, waiting to see how the situation with COVID evolves,” he says.

“This is a real-time, evolving story where nothing is absolute, and companies are continuing to revise their back-to-work schedules,” agrees San Francisco-based Al Pontius, senior vice president with Marcus & Millichap Real Estate Investment Services. “We’re getting a fresh round of ‘wait and see.’ Until this wave of virus starts to subside, trying to predict back-to-the-office is impossible—no one knows how long that will take.”

Office landlords are largely leaving COVID-19 safety management up to their tenants, but many are now requiring people entering their buildings to wear a mask. Noting that the Biden Administration favors a policy of full vaccination to work in an office space, Miscovich says that many of his clients had implemented mandatory vaccination for office workers, despite the continued legal debate over this policy.

Some tenants are going even further. Goldman Sachs, for example, will require all returning workers to get a booster, as well as making them take twice-weekly COVID-19 tests. Google, meanwhile, told employees they will start losing pay and will eventually be terminated if they fail to get vaccinated or approved for a religious or medical exemption by the company. All employees have been required to file their vaccination or exemption status, regardless of whether they plan to work from home or not.

According to Pontius, masks indoors are still mandatory throughout California, but policies have varied elsewhere. He notes, however, that office policies are changing rapidly as Omicron sweeps the nation. For example, Pontius was in New York City recently for meetings with institutional-grade clients, two of which closed their offices and changed his meetings to ZOOM calls. In one case, no one in the office was wearing a mask, but everyone working there or visiting had to be fully vaccinated, he says.

For now, Miscovich expects trends seen in 2021, such as hybrid working, to continue in 2022.