Analysis of the office sector, including development, leasing, finance, investment and property management. 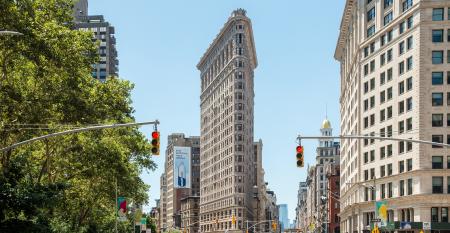 NYC’s Famed Flatiron Building Gets a Makeover for New Tenants
May 13, 2021
The nearly 120-year-old tower will undergo a total renovation of its interior as its office space sits totally empty for the first time...

World’s Vaccine Trailblazer Shows What Return to Office Will Look Like
May 06, 2021
Google’s mobility data shows a sharp increase in travel to work in Tel Aviv during April, with numbers now close...

Bank Bosses Want a Return to Office. Underlings Aren’t So Sure
May 04, 2021
A survey of 400 North American financial services executives found almost 80 percent want workers to spend four to five days in the office.

Battered U.S. Office Market Perks Up with Workers Trickling Back
Apr 28, 2021
National demand for offices jumped 28% in March from the prior month and is now just 9% below pre-pandemic levels.

Top 20 Office Investment Sales Markets in 2021 So Far
Apr 28, 2021
The markets that saw the most office investment activity in the first quarter include many of the country’s largest cities.

Heading Back to the Office? Ask for Air Filters, Not Bleach
Apr 28, 2021
“I don’t want to hear about your surface cleaning procedures, because that is a waste of time and money,” said Linsey Marr, a professor of civil and environmental engineering at Virginia Tech.

JPMorgan to Bring Back All U.S. Staff on Rotating Basis in July
Apr 27, 2021
The bank said all U.S.-based employees will be in the office on a consistent rotational schedule by early July.

Almost Half of U.K. Office Workers Are Back at Their Desks
Apr 26, 2021
Office occupancy across the U.K. topped 40 percent last week, the highest point since the 72 percent occupancy seen in early March 2020.
Load More