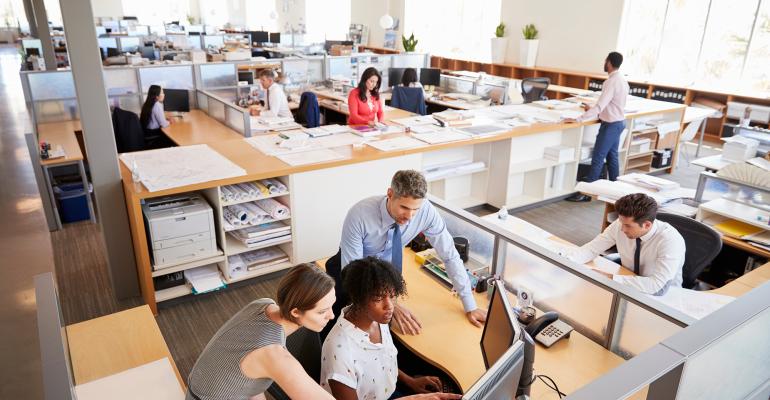 Major Office Distress Is All the Talk. But So Far, it’s Not the Reality.

But while there is a lot of talk about the potential for office distress, the figures from the firms that track commercial loan delinquencies, including Trepp, Fitch and Moody’s, don’t bear this contention out. In October, the office CMBS delinquency reported by Fitch stood at 1.23 percent, up from 1.19 percent in September, but still behind delinquencies for hotel, retail and mixed-use properties. Trepp reported the office delinquency rate for the month at 1.75 percent, up from 1.58 percent in September. The firm’s researchers tied the increase to lease expirations in the sector. Meanwhile, Moody’s reported the conduit delinquency rate for office properties at 2.69 percent, up 13 basis points from September and 30 basis points from a year ago.

The industry is expecting distressed office sales to emerge in some market pockets nationally, but the impact will likely not be widespread and will not affect all investors equally, according to Aaron Jodka, director of research, U.S. capital markets, at real estate services firm Colliers. That said, with limited distressed property sales to date, he suggests that given the low starting base, any increase could look big on a percentage basis. Properties with occupancy concerns, inferior locations and deferred maintenance are most at risk for distress.

Related: How Are CRE Lenders Responding to the Fed’s New Loan Workout Recommendations?

A signal of potential instability in the office sector is weakening demand for office space and a marketplace increasingly favorable to tenants. Tenants are waiting until the end of their leases to consider renewal or negotiation, notes Asher D. Wenig, senior vice president at real estate services firm Northmarq. “Landlords are increasing tenant improvements (TIs) allowances, and with a flux in office rents, it’s become a bit difficult to know the backfill options in many markets,” he adds.

The office sector will likely undergo a lot of changes in coming years, with different tenant footprints and worker demands, Wenig says. While people are returning to the office, large gateway markets including New York, San Francisco and Chicago are seeing rent corrections and companies downsizing their office space.

The good news is there is enough liquidity in today’s market for financing distress transactions, according to Mike Walker, executive vice president, debt & structured finance, with real estate services firm CBRE. Over the past two months, a number of the firm’s clients have expressed interest in providing mezzanine, preferred equity and rescue capital to fill the gaps between the loan payoff amounts and what the new senior debt market will provide, Walker says. He notes that this funding can also help to cover carry costs or provide capital costs for TIs and leasing commissions.

At the same time, “We are nowhere near the conditions of the Great Financial Crisis,” says Jodka. “The big difference between the GFC and today are interest rates. Coming out of the GFC, lenders were able to ‘kick the can,’ and low interest rates and quantitative easing (QE) allowed many loans to essentially work themselves out.”

Interest rates are higher today, so loans needing to refinance face a different market environment, Jodka notes. “Market consensus is for the Fed to increase its borrowing rate into 2023, but eventually pivot. It is difficult to predict interest rates and economic conditions, but it is less likely for a QE situation to help support near-term loan maturities.”

Walker suggests that continued upward movement in the Fed rate has made CMBS loans a more attractive option for office owners in need of refinancing. Previously, CMBS financing wasn’t particularly appealing because it didn’t price efficiently, but compared to the coupons on most floating rate, SOFR-based (Secured Overnight Financing Rate) loans today, a five-year CMBS execution is now attractive because it can be accretive and limit further interest rate increases, he notes. Another benefit is that unlike with five-year floating-rate debt, with a CMBS loan there is no requirement to buy a SOFR cap or hedge, which is quite expensive in this environment.

Banks should also be back in play next year, according to Walker, with some funding for investments in distressed office properties. A number of CBRE bank clients have expressed an intent to return to the market in 2023 after sitting on the sidelines in the second half of 2022.

While much of their focus will remain on industrial, life sciences and multifamily deals, he expects some bank allocations to trickle back into the office sector. “This will start by focusing on the stronger, well-located and cash-flowing assets with top-tier borrowers, but it will also make its way to debt funds via the A-note market and warehouse lending, which will help some of the less stabilized assets secure financing—albeit at higher yields,” Walker says.

There will be no tidal wave of funding for stabilizing distressed office assets, but any increase will be a welcome change from the second half of this year. Then, if inflation levels off and there are no expectations for further drastic rate hikes, that “trickle” of funding will probably evolve in the second half of 2023, Walker adds.

Meanwhile, while investors are waiting on the sideline for opportunities to snap up distressed office properties at bargain prices, many of these assets will be repositioned for other uses or razed and replaced, notes Jodka. He cites numerous future scenarios that could play out for distressed office assets: conversion to life sciences space in select markets, housing, government facilities, schools or medical use are all likely outcomes.

At the same time, he notes that the narrative about large-scale office-to-residential conversions in practice revolves around a challenging strategy because building floor plates have to be compatible with residential use. “Cost is also a factor, as is zoning,” Jodka adds.