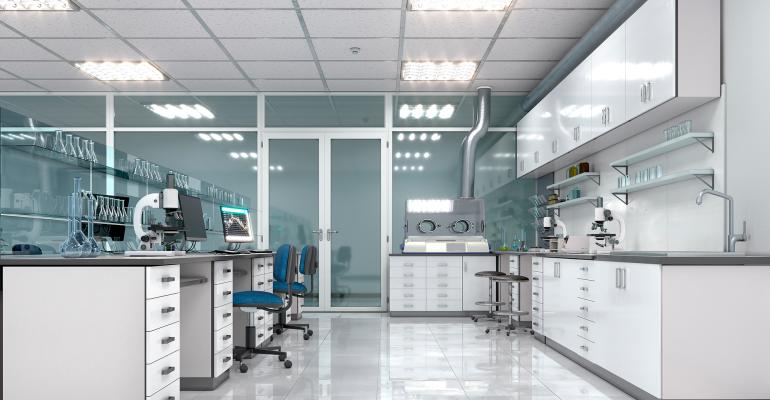 The Once Red-Hot Life Sciences Sector Returns to “Normalcy”

Tenant demand for life sciences space is declining due to a slowing economy, rising interest rates and a pullback in available venture capital.

As the U.S. commercial real estate market adapts to rising interest rates and a less certain outlook for the economy, the life sciences sector remains a strong performer. But some signs of a slowdown are appearing even here.

In the third quarter, occupancy dipped to 94 percent across the top 12 U.S. life sciences markets—from a peak of 95 percent in the first quarter of 2022, according to a November report from commercial real estate services firm CBRE. CBRE also registered a 30-basis-point increase in quarter-over-quarter vacancy, to 5.3 percent. That was largely due to a significant amount of new supply (2.1 million sq. ft.) hitting the market, leading the addition of available new space to outpace absorption of 363,047 sq. ft., the firm’s researchers estimate.

Related: 12 Most in Demand Life Sciences Markets in the U.S.

“Life sciences occupancy has remained strong relative to a year ago, but we have begun to see evidence of excess space and sublease activity in some of the more active markets, like San Diego and Boston,” says Philadelphia-based Joseph Fetterman, executive vice president and leader in the national life sciences practice group with real estate services firm Colliers.

Currently, tenants across most markets are scrutinizing expansions more carefully, partly because of capital constraints associated with an increasingly difficult environment for raising new capital, notes Fetterman. “This may lead to increasing vacancy in markets where the long-awaited delivery of new purpose-built product is expanding overall inventory in a moment of uncertainty and contracting demand.”

Overall, about 38 million sq. ft. of new life sciences space is currently under construction in the country. About 88 percent of that product is being built on a speculative basis, while roughly 28 percent is pre-leased, according to Sacramento-based Matt Gardner, who leads CBRE’s Americas life sciences advisory group. The large amount of speculative development is an indicator of the confidence investors have in this sector, as prior to the pandemic spec lab construction was rare, Gardner notes.

That was because at that time, life sciences projects were large and pricey to build, typically costing up to $1,000 per sq. ft. and requiring an overall investment of at least $50 million, according to Oklahoma-based Craig Tomlinson, investment sales broker at real estate services firm Northmarq. But since big private equity firms entered the sector, the sales price of life sciences assets has doubled, making new construction worth it. In the third quarter of this year, for example, Biogen sold one of its lab buildings in Boston to Boston Properties for more than $2,000 per sq. ft., Tomlinson notes. The Carlyle Group also sold the Good Start Genetics lab in Boston to GI Partners for roughly the same price per sq. ft.

While life sciences jobs rose by 5.4 percent in the third quarter of this year, according to CBRE data, venture capital funding is now down to $4.9 billion a quarter, more in-line with pre-pandemic levels than with the outsized growth of the past few years. That figure represents a decline of 29 percent quarter-over-quarter and 42 percent year-over-year, CBRE reports.

Still, the sector is performing well enough that landlords continue to have the upper hand in lease negotiations due to continued low vacancy.

For example, life sciences rents grew by 13.7 percent year-over-year in the third quarter, according to Los Angeles-based Amber Schiada, head of Americas work dynamics and industry research with real estate services firm JLL. That’s down from the rate of 24.4 percent year-over-year growth recorded in the third quarter of 2021, but still respectable.

CBRE estimates that the average asking rent increased in the third quarter by 6.8 percent across all 12 top markets to $60.28 per sq. ft.

“While we anticipate that rent growth will slow significantly in the short term, rates for purpose-built product will likely not decline in most markets, except those where supply dramatically outpaces demand,” notes Fetterman.

Nevertheless, interest in converting traditional office buildings into life sciences space has waned since its peak in 2021, according to Schiada. The cost of capital, as well as the costs of materials and labor have increased since that time, “and with uncertainty in the macro-economy expected to persist through the first quarter, we anticipate activity will remain subdued through the period.”

According to CBRE data, 106 office-to-lab conversions have been completed, are under construction or planned in the period from 2017 to 2024 and beyond, with the majority of these projects concentrated in Boston, San Diego, San Francisco and Philadelphia.

Meanwhile, 74 percent of new spec construction was available for lease in the third quarter, on top of 9.5 million sq. ft. in vacant existing space, exceeding demand by 13.5 million sq. ft., CBRE researchers note. The firm estimates that demand declined by more than 6 million sq. ft. over the past two quarters, suggesting that the market is returning to pre-pandemic conditions.

The excess life sciences space currently on the market will likely be absorbed next year, as Schiada notes that the additional 70 million sq. ft. of space in the pipeline will remain on hold until more economic clarity emerges, prolonging development timelines and mitigating oversupply risk for the sector.

“We’ve seen a number of companies adjust their growth plans,” adds Gardner, who noting that subleasing activity appears to be increasing and hiring in the sector is growing at a slower rate.

“Tenants are certainly reacting with more caution, especially those that are venture-backed and need to preserve cash,” says Schiada. She notes that in tandem with economic uncertainty, start-up investors have become more selective and reserved, preferring to invest in companies with proven science and leadership groups.