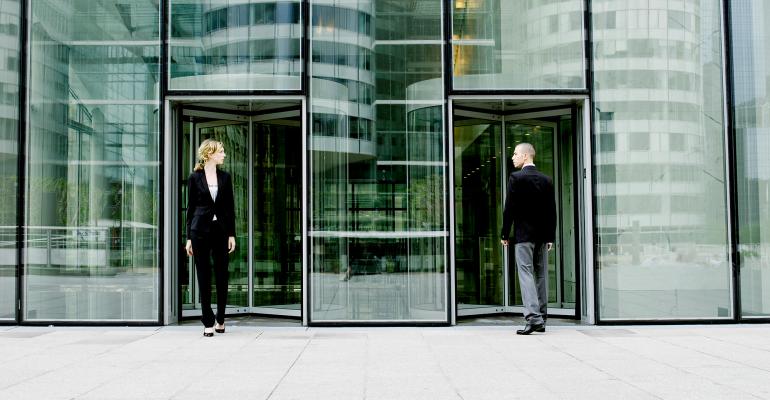 Where Are We in Return to the Office? Once Again, Nobody Is on the Same Page.

The only trend that appears to be undisputable in the return to office story is that there’s no one overarching trend.

After many Americans were sent to temporarily work from home as COVID-19 spread exponentially in the spring of 2020, the full-scale return to the office was initially set for the summer, and then the fall, and then the spring of 2021. It then moved several more times as new variants spread and people got used to their new home-bound routines. Two years after that big return to the office was supposed to take place, the outlook for physical occupancy in U.S. offices remains extremely complicated.

Worldwide, there has been a noticeable return to the office, of sorts, according to occupancy analytics platform Basking.io, which estimates that in the second quarter, 50 percent of people working from the office were coming in on a once-a-week basis.

There are multiple reasons why white-collar workers are resisting the return to the office, and only some of them, at this point, have to do with the fear of COVID-19. Some of them have to do with long and often unpleasant commutes, given the state of public transportation in large U.S. cities. Others with the difficulty of breaking habits formed during the work-from-home phase and adopting once again to going into the office. A significant role has also been played by a disconnect between what people really want from their offices (privacy, dedicated workspaces, a chance to interact in person with their colleagues) and what corporate real estate strategists have convinced themselves they want (more open space, hot desking and unlimited Clorox wipes). Plus, many employers are encouraging, rather than requiring their employees to come into the office a certain number of days, leading to confusion and a lack of clear expectations about how frequently to come in or when office visits would be most effective, according to market research by commercial real estate services firm CBRE.

Some companies have adopted to the push-and-pull office dynamics by announcing they are going fully remote (Yelp, for example, made such an announcement in June), while others slashed the amount of office space they were planning to occupy. Twitter plans to vacate its Tenth Street office in San Francisco and reduce its office space in New York City, while also shuttering or downsizing multiple overseas offices. Meta, meanwhile, decided not to pursue an additional 300,000 sq. ft. of office space in New York City and Amazon opted out of pursuing an expansion at 5 Manhattan West in the Hudson Yards.

But there are also signs emerging that some corporate executives are nearing the end of their patience for the widespread trend of remote work. Tesla CEO Elon Musk made what probably amounted to the biggest splash in that debate in early June, when he sent an email to employees at both Tesla and SpaceX requiring them to work in the office at least 40 hours a week, or depart from the company.

And this week, Apple, informed its employees located near its Santa San, Calif. headquarters, that they will be expected to come into the office three days a week starting in September.

So far, the lack of clear consensus on return to the office continues to have a negative impact on office fundamentals. In the second quarter, net absorption in the U.S. office sector contracted by 12.8 million sq. ft., according to research from commercial real estate services firm Newmark. The national vacancy rate rose by 122 basis points year-over-year, to 17.4 percent. Average asking rents did tick up slightly, however, by 190 basis points to $31.09 per sq. ft.

In Newmark researchers’ view, the extension of remote work periods and summer seasonality are impacting return to office trends. They don’t expect to see a meaningful increase in physical office occupancy until the fall. Given how long it’s taking U.S. corporate occupiers to figure out how to effectively organize a return to the office, it might take even longer than that.