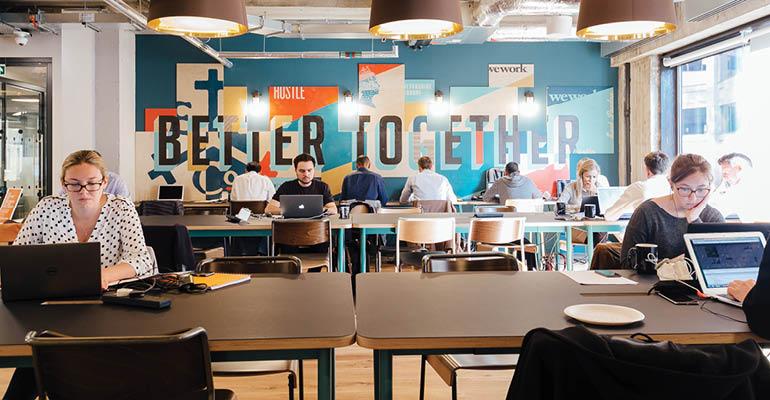 The Co-Working Sector Is Set for a Major Boost. But There Will Still Be Growing Pains.

After recovering rather quickly from the pandemic, the co-working sector is now growing at an accelerate rate. A more geographically distributed workforce and commonplace hybrid work policies are benefitting flex space operators, according to industry insiders.

Major co-working providers are reporting increasing occupancy quarter-over-quarter this year, with some quoting occupancy upwards of 70 percent in primary markets, Sidney, notes. WeWork, for example, reported that its occupancy rose to 73 percent in the second quarter of 2022, which is comparable to the level recorded pre-pandemic, in the fourth quarter of 2019. Meanwhile, Switzerland-based International Workplace Group (IWG) reported a 17.7 percent increase in revenue growth in the first quarter, totaling $782 million, which it attributed to booming demand for suburban co-working spaces. IWG currently has co-working operations in 300 U.S. cities under two brands, Regus and Spaces. In June, the co-working giant announced plans to open 500 to 700 additional U.S. co-working facilities in smaller markets under different brands.

At the same time, what’s happening in the co-working sector is “a mixed bag,” says Michael Lirtzman, head of office agency leasing, U.S., with real estate services firm Colliers. “We have seen some co-working absorption and activity in non-CBD core locations, both suburban and on the periphery of downtown hubs. But in dense, urban cores, occupancy still varies by metro, with Sunbelt locations outperforming traditional gateway cities.”

While most major co-working operators managed to stay afloat through the pandemic and reposition themselves as providers of alternative workspaces for both small and large companies, a few struggled and were forced to shut down. Los Angeles-based CTRL Collective, for example, filed for Chapter 11 bankruptcy earlier this year after downsizing from multiple locations to just one in Pasadena, Calif., which remains open for business. And at the end of August, The Wing, a co-working operator aimed at professional women, announced it would shut all its locations as well.

As traditional office occupancy remains in flux, many landlords are incorporating flex or co-working spaces into their own portfolios. And large, global real estate brokerage firms, including JLL, CBRE, Cushman & Wakefield and Newmark, view flex space as the future of the office market and have taken stakes in co-working operations. Cushman & Wakefield, for example, has partnered with WeWork, CBRE acquired a 40 percent share in Industrious, and Newmark acquired Knotel.

JLL established its own Flex by JLL platform in 2021 and now has 10 locations in the U.S., in addition to two in the U.K. and three in Australia. The company recently announced its first ground-up, 15,407 flex and co-working facility in Secaucus, New Jersey, in partnership with Manulife U.S. Real Estate Investment Trust. Scheduled to open in the second quarter of 2023, the new Flex by JLL space, located within an 11-story office building in the Harmon Meadow mixed-use complex, will offer flexible private offices, co-working spaces, meeting rooms, team suites and virtual offices.

According to a report from The Business Research Company, a market research and intelligence firm, the global co-working industry is expected to grow from $13.60 billion in 2021 to $16.17 billion this year, for a compound annual growth rate of nearly 19 percent. It is projected to continue to grow at a rate of 17 percent annually to more than $30 billion in 2026. The report suggests that growth in the co-working sector directly correlates with the growing number of start-ups globally, as they drive demand for co-working space.

With many entrepreneurs now worried about higher interest rates, sinking tech stocks and an uncertain outlook for the economy, that uncertainty is causing start-ups to lease co-working spaces rather than make long-term traditional office space commitments.

But according to Sidney, flexible office space providers are also seeing a significant increase in interest from larger, enterprise firms, across many different industries. “Our recent internal survey showed that historically traditional users, such as those in financial services and professional services, are adopting flexible office spaces and plan to increase [them], in some cases nearly doubling their usage of this asset type by 2024,” she says.

According to CBRE’s 2022 office Occupier Sentiment Survey, 59 percent of U.S. occupiers say flexible office space will be a significant part of their portfolios within two years. As a result, Sidney says that flexible office providers have upgraded their offerings recently, responding to the needs of larger, enterprise clients. “The latest evolution is how flexible office providers accommodate desk sharing,” she adds, noting that with hybrid work policies in full force, organizations may need a suite with 30 desks to accommodate 45 employees. “Finding a way to offer this additional access without nickel-and-diming tenants, but still managing occupancy at the location is top of mind.”

Co-working operators have adapted fairly well to flexible and hybrid office set-ups, as they tend to be slightly more nimble than direct landlords, adds Lirtzman. He notes that certain operators and locations have performed better than others, but there is still a rightsizing happening in many markets, with a number of co-working operators who overexpanded in 2017-2020 now shedding locations.