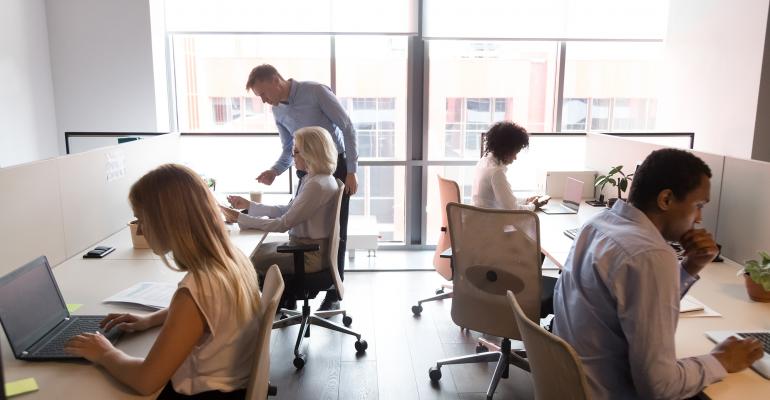 Co-working operators are experiencing a higher percentage of workers returning to the office than traditional landlords.

At the beginning of the pandemic, many people believed it would wipe out the co-working model with the advent of work-from-home policies. Two years later, it appears many co-working operators not only survived, but may be doing better than traditional landlords.

By mid-year 2021, the world’s two biggest global co-working operators, WeWork and IWG plc (formerly known as Regus), reported a bounce-back in occupancy, to 52 percent and 69 percent, respectively. They also reported increases in revenue.

After a blip during the Omicron wave this winter, co-working leasing activity is expected to pick up over the next couple of months and some operators are already looking for spaces to grow, according to New York City-based Christelle Bron, Americas agile practice leader with real estate services firm CBRE. She notes that availability of co-working space is already tight in certain markets, including Miami and Seattle, and 26 new co-working locations opened in the fourth quarter of 2021 across the U.S. and Canada.

Related: The Co-Working Sector Is Bouncing Back

The availability of flexible office space inventory has remained suppressed in the wake of the pandemic due to give-backs and lease restructurings that limited supply, while demand for flexible space options increased significantly in recent months, says Scott Homa, senior vice president and director of U.S. office research with JLL.

“Today, the flexible office market comprises approximately five percent of the entire major office stock,” he says. “But given the rise of hybrid work and tenants' increased demand for agility, we expect that 30 percent of office space will be consumed flexibly by 2030.”

Homa predicts that much of this new consumption will be in pre-built suites geared for larger enterprise-type occupiers.

Co-working operators are already benefiting from more geographically distributed workforces and the entry of tech and other office-using industries into more secondary and tertiary markets.

Over the past month, there has been an uptick in both physical occupancy at co-working facilities and inquiries by prospective members, resulting in space tours above pre-pandemic levels, notes Bates. “This is expected to boomerang back and expand over the next few years, with enterprise corporate clients becoming the largest occupier of flexible space.”

Where the money is coming from

With flexible office space currently outperforming traditional offices on occupancy, Bron notes that the co-working sector has become attractive to a broader spectrum of investors. “We have seen a significant move to embrace flex by more traditional real estate capital sources, as well as the usual venture capital-oriented players,” she says.

This is happening for two reasons. First, investors are more comfortable signing profit-sharing agreements when they can benefit from general market upswings. Secondly, investors are recognizing that they can survive and maybe even thrive by backing properties that are attracting tenants with more flexibility.

For example, last year, WeWork entered a strategic partnership with Cushman & Wakefield, which integrated WeWork’s workspaces into the firm’s global occupier portfolio. Newmark and a private investor acquired Knotel, which filed for bankruptcy during the pandemic. And CBRE acquired a 35 percent stake in flexible workspace operator Industrious, making CBRE its largest shareholder.

More recently, JLL established Flex by JLL, the most significant new entrant into the flex and co-working industry since the pandemic began. Bates notes that Flex is an expansion of JLL's property and experience management services for asset owners, delivering flexible office products and services to both consumers and enterprise occupiers.

Office landlords/investors recognize the opportunity flexible workspaces provide for attracting new tenants, which may eventually transition to traditional leases, and are increasingly establishing their own flexible operations.

“Major real estate investors have and will continue their own evaluations of buy, build and partner scenarios,” Bates adds. “But flex is much more of a hands-on approach to delivering a higher service quality than traditional property management, so the long-term question is ‘at what size can landlords effectively and efficiently operate flexible office spaces without partnering with a major real estate services company?’”