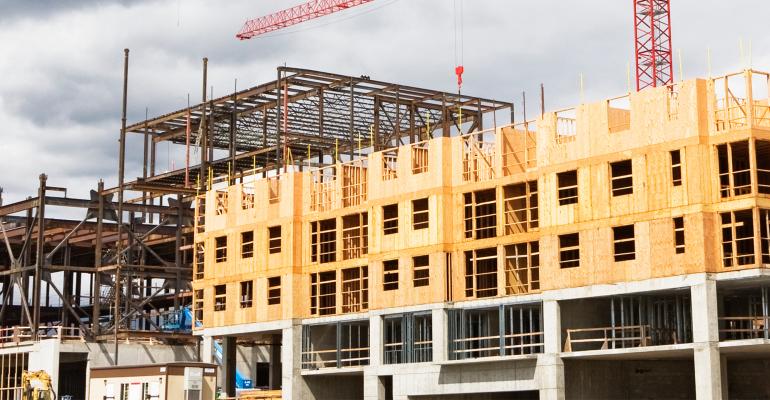 Rates remain low and lenders of all types are bullish on the sector's fundamental strength.

With occupancies stable and rents rising, developers are eager to build new apartments. Local and regional banks—and even some national banks—are happy to provide the right sponsors with non-recourse construction loans at almost the same leverage levels borrowers enjoyed before the coronavirus pandemic.

These banks are still being more selective than they had been before the pandemic about the borrowers who they lend to and the apartment development projects they finance. However, interest rates are historically low for banks and they have not put a floor on how low their loans can float. The other terms of the loans banks offer are often not substantially different than they had offered before the pandemic.

Related: How Much Do Multifamily Investors Need to Worry About Demand for SFRs?

“In terms of proceeds, pricing and recourse structure, all that is pretty darn close to what we were seeing pre-COVID,” says Jay Wagner, executive managing director for Cushman & Wakefield.

Recently, an apartment developer received a very low interest rate on a construction loan from a bank to develop a new apartment property—including a few single-family rental buildings, according to Bill Leffler, senior vice president, of capital markets for CBRE. The interest rate on the 48-month loan will float 225 basis points over the London Interbank Offered Rate (LIBOR) with no floor on how low LIBOR can go. Currently, the 30-day LIBOR rate is just a few basis points above zero. The loan will cover 60 percent of the cost of construction with no recourse.
“Banks will go to 65 percent loan-to-cost for the same interest rate, but they require some recourse,” says Leffler.

These terms are now close to what borrowers could get before the pandemic. “We are seeing terms that are approaching if not already at pre-COVID terms,” says Wagner. “The big difference is the selectivity of the lenders that are out there.”

Many of the largest, national banks sharply cut back on their construction lending during the pandemic. “At the local and the regional bank level a lot of lenders have stepped up and grabbed market share from the national lenders. That is where we see a fair amount of competition for the loans,” says Wagner. “We have been able to drive the terms in a very favorable way thanks to the participation of local and regional banks.”

The low cost of financing is particularly important given that high materials and labor costs are putting pressures on yields on ground-up projects.

However, to get a loan with those competitive terms, borrowers need a plan to build that impresses bank underwriters. “The primary underwriting criteria remains (after “sponsorship experience”) health of the immediate market… population and job growth prospects and how that would allow for rent growth,” says Leffler.

Apartment developers don’t seem worried by the likelihood interest rates will rise while they are still making payments on a floating-rate construction loan.

“Interest rate movement of 25 to 50 basis points probably would not move the needle that much on whether to build or not,” says CBRE’s Leffler. “Rates would have to move much more dramatically than anyone is predicting before that would hinder development.”

Short-term interest rates like LIBOR will certainly rise once federal officials eventually raise their benchmark federal funds interest rate up from zero.  In the slow recovery from the financial crisis, officials kept that rate at zero for years before slowly beginning to raise it, reaching 2.5 percent in 2019; and the 30-day LIBOR closely followed the Fed Funds rate. Economists now expect the recovery from the pandemic to be much faster. The unemployment rate was already under 6.0 percent in June—as the economy added 850,000 jobs in a single month.

Developers can protect themselves from rising interest rates by buying interest rate caps, a financial instrument in which an investor agrees to take on the risk rates will rise at a cost of much less than a percentage point, though the cost was even cheaper until recently. “Cap purchases had been very inexpensive until this past week, and the price for a cap has jumped a bit,” says Leffler. Even at these low prices, developers have largely done without caps unless a lender requires them.

“It’s not really affecting developer decision processes,” Leffler adds. “The biggest issue for development remains rising construction costs and how that narrows the return-on-cost metrics… although lumber prices have moderated in the past week or two.”