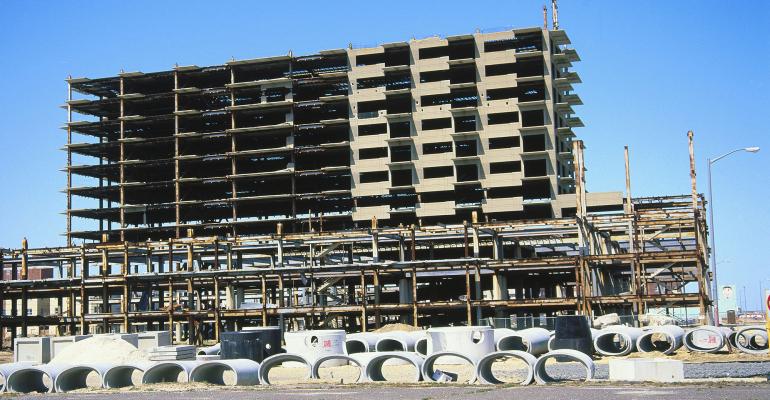 Many developers are hoping rising rents will eventually make up for the higher costs to build new projects.

Apartments investors have had to adjust their expectations—and their construction budgets—to account for the rising cost of lumber, steel and other materials.

But these developers are still rushing to build new apartments. If they have already started construction, then they have probably already committed millions of dollars to their plans. Even many who have not yet closed on their financing are still taking out new loans and breaking ground on new projects, even though sky-high costs for materials are likely to cut into the likely yield on their investments.

“They have to hope that at the end of the three-year process that there is some profit left over,” says John Sebree, senior vice president and national director of multifamily for Marcus & Millichap, working in the firm’s Chicago office.

Construction prices are way, way up

The cost of materials developers need to build new apartments rose very quickly starting in the middle of 2020, according to the U.S. Bureau of Labor Statistics. In contrast, over the two years before the coronavirus pandemic, and even in the first months of the crisis, prices held relatively steady. Prices grew 21 percent over the 12 months that ended in April 2021, according to the producer price index for net inputs to multifamily residential construction, excluding capital investment, labor, and imports. This index measures prices contractors say they would charge to build a fixed set of buildings

Prices swelled as developers kept building apartments through the pandemic year, even though large parts global economy remained frozen over as the virus continued to spread.

“The largest increases this year have been in materials prices, with market prices for some commodities like lumber and steel up more than double in some cases,” says Henry D'Esposito, construction research lead for JLL, working in the firm's offices in Washington, D.C.

In the two years before the pandemic, economists blamed trade tensions for many price increases. For example, lumber prices rose during a trade dispute with Canada. Prices rose even more during the pandemic, in part because demand continued to be robust while a number of the mills and factories were not able to operate at full capacity.

“There is some optimism that prices will normalize somewhat after a temporary spike as supply chain management issues are resolved,” says Shauna Decker, director of global development solutions for B+H Architects, based in Seattle.  “In fact, lumber prices have started to come towards the end of May, relieving some pressure.”

However, economists and researchers including D'Esposito still expect elevated construction cost inflation over the next year overall.

“Most developers that I am talking to are doing everything they can to move forwards,” says Sebree.

Developers started construction on new apartments in April 2021 at a seasonally-adjusted, annual rate of 470,000 a year, according to the U.S. Census. Even if you take the numbers with a grain of salt, because the chaos of the last 12 months must “season adjustment” more difficult, that’s a lot of new construction.

“Rather than a drastic pullback, developers are taking a second look at project pricing and in some cases considering timing changes that could avoid peak prices this summer,” says D'Esposito. “Overall, the market is looking for ways to work around current price spikes and mitigate the impacts, rather than cancelling projects altogether.”

“Spiking costs of commodities can have an impact on investors yield for projects caught in the midst of rapid change in prices,” says Decker.

However, developers are not changing their plans too much. They are unlikely to focus on a different kind of development than they normally favor, says Sebree.

In the longer term, many are hoping rising rents will eventually make up for the extra money they are forced to spend on commodities like wood and steel. “Many developers are feeling confident about their future rents and occupancy,” says Sebree. “A few markets are experiencing softness—the vast majority are not.”

In the shorter term, some developers are also saving some money on other parts of their construction budget. “Do they adjust their finishes, the countertops, the appliance package, the common areas… do they delay on delivery a little bit?” says Sebree.

Development projects with larger holes in their capital budgets might bring more capital into the deal. “It is possible that they increase the amount of equity coming in just to feel a little safer?” says Sebree. “For some projects, that could be a smart move.”