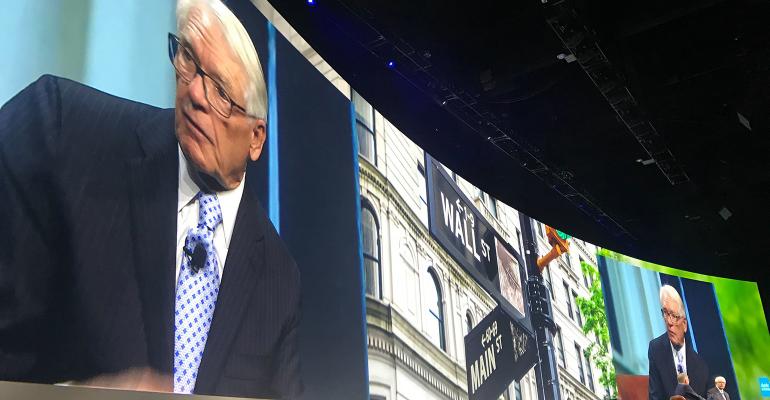 For Some RIAs, $0 Trades May Bring More Pain Than Gain

Did custodians really factor in how the change would affect advisors?

A little over a month ago, Charles Schwab announced it would drop commissions for equity and ETF trades. Framed as a boon for the end-investor, how the decision impacts the more than 7,500 independent financial advisors that custody assets at Schwab is not as clear-cut.

While Schwab Corp. founder Charles Schwab may famously hate commissions, they were part of the business, and therefore part of the businesses—like independent advisory firms—that operated downstream from the discount broker. Now that they’re gone, new doors could be opening for innovations in portfolio management and direct indexing, according to Schwab leadership, while compliance consultants and lawyers warn advisors that they simply can’t pocket the fees that they save—at least not without telling their clients. Meanwhile, some advisors are scratching their heads, wondering if they should refile regulatory paperwork. Others are wondering how the fees they charge clients, or the services they offer, might be affected.

For advisors with a wrap fee, moves like Schwab’s will have a significant impact. “In my experience, very few RIAs actually absorb the fees, so that's certainly more the exception than the norm,” said Brad Wales, registered investment advisor consultant at Raymond James. “But for the ones that do, that's about to be a big change for them.”

Wales has wondered aloud if RIAs can’t just pocket some of the cost savings from moves to zero made by custodians. “It's uncharted territory,” he said. “Anytime there's change there's—not unintended consequences—but there is a trickle-down effect,” he said.

He imagined a scenario where an RIA uses exchange traded funds and charges a 1% of assets under anagement fee to clients, and absorbs the transaction costs levied by the custodian. With the fee for those trades now gone, the advisor's margins improve, but do they actually need to disclose anything?

It depends on the language used in the advisor’s regulatory filing and whether “this new reality is material or not,” said Hope Newsome, the managing partner of Virtus LLP. “An RIA may need to update its ADV if it explicitly states that it absorbs costs, which now, it no longer absorbs.”

Other factors an advisor may need to weigh include “disclosures regarding the factors it considers when recommending or selecting brokers,” she noted, “especially where it may have one custodian that does not charge for trades and another that does.” In a situation like that, where an advisor might be picking a custodian that has a higher fee, the RIA can expect to address why he or she is selecting the higher fee custodian.

“An RIA must provide its fee schedule on the ADV, but it does not necessarily have to disclose how absorbing fees on behalf of that client impacts its fee schedule,” she added. “Obviously, clients may inquire.”

While custodians are seeing trading fees disappear, Newsome questioned whether that move could start a chain reaction. “It will be interesting to see if the same pressure to reduce fees trickles to RIA fee schedules next, especially on the institutional side,” she observed. “In some ways, I wonder if firms that absorbed fees are in a weaker position than those that did not—when considering the impact of these changes.”

Schwab doesn’t foresee negative impacts for advisors. “I really don't think there are any disadvantages,” said Andrew Salesky, head of Schwab’s digital advisor solutions. “Either for end clients, clearly, nor for advisors.”

He assured advisors that their interest had been taken into account by the firm’s executives. “There's strong representation of the advisor point of view” in the decision to implement $0 trades, he said. “Every decision we take comes [through] a lens of advisors.”

In fact, the move could accelerate a trend toward direct indexing, where advisors essentially cut out the asset manager, invest directly in a given index and then tweak that index for individual clients, Salesky pointed out. “It creates an opportunity, but there’s still the management of the index” he said. “Is that something that advisors are going to want to do? Is that something that end-clients are going to find of value?”

The full impact of $0 trades is still being measured at other firms, too. Fidelity’s Abigail “Abby” Johnson has said she doesn’t see commissions as a commodity, but foresaw the time they would drop to zero. In fact, when Fidelity made its move to $0 trades, the idea was that it would benefit the end-clients of RIAs, not necessarily RIAs, according to a company spokesperson. The firm suggested that its advisor clients evaluate the new pricing schedule offered by Fidelity and the impact it has on the ADV disclosures of their advisors.

Like any major pricing change by a vendor, it’s up to advisors to decide how to make sense of what’s happening and respond accordingly. Anthony “Tony” Christensen, managing partner at ACCESS Wealth Management in Louisville, Ky., does use a wrap fee. “I'm very excited to see the commissions go to zero,” he said, adding that “it’s one less layer of complexity.” As long as he continues to provide high-caliber advice for his clients, “they’re very willing to pay for that value that we’re able to bring.”

“If you keep your fees the same and you're offering a much deeper level of service on things that go far beyond what the service used to be, I think the clients feel better valued,” he explained.

Some could see a situation where advisors pocketing the savings might be more trouble than it’s worth. “Maybe [advisors] pass that cost savings along to their clients or they just catch that windfall from this announcement,” said Max Schatzow, an attorney at the law firm Stark & Stark. “At the end of the day there was no guidance on how an investment advisor should handle that situation or that conflict. Part of me feels that it is a conflict of interest that [advisors] did not create.”

That said, Schatzow warned that an examiner or the SEC could argue that the windfall changes the “dynamic of the client relationship” enough that there is an obligation to notify the client of the new cost structure.

The SEC declined to comment on how a move to $0 trades would affect advisors’ ADV language and referred to the instructions for the Form ADV, noting that it contained information on what must be disclosed and when it must be updated.

It’s the SEC’s prerogative to not get involved in the minutiae of $0 trades, said Brian Hamburger, founder and managing member of the Hamburger Law Firm. Advisors need to factor in the impact of $0 trades and take action accordingly, he said.

Hamburger sees three roads to follow: reducing the overall wrap fee, removing it entirely and changing their fee schedule, or adding services to show that clients are now getting more value, he said. “They're going to have to deal with it,” he said of advisors. “What they can't do is just bury their head in the sand and pretend that it doesn't exist. They can't just simply take reduction in the cost of reduced brokerage transactions and tack it onto their profit margins.”

For advisors who are confused by what $0 trades mean for their disclosure language and business models, Hamburger places qualified blame at the feet of custodians. Advisors would have been up in arms if they were excluded from $0 trades, he said, but their situations weren’t adequately considered before the moves were made.

“When we started to talk to [custodians] about the advanced discussions that they've had with advisors, they haven't happened,” he said. “Advisors are left to fend for themselves and figure out what the impact that it has on their business is. This move was clearly dictated from retail channels.”

“Advisors are simply the beneficiary of this move,” he concluded. “It’s the better of two problems, but it’s still a problem nonetheless.”