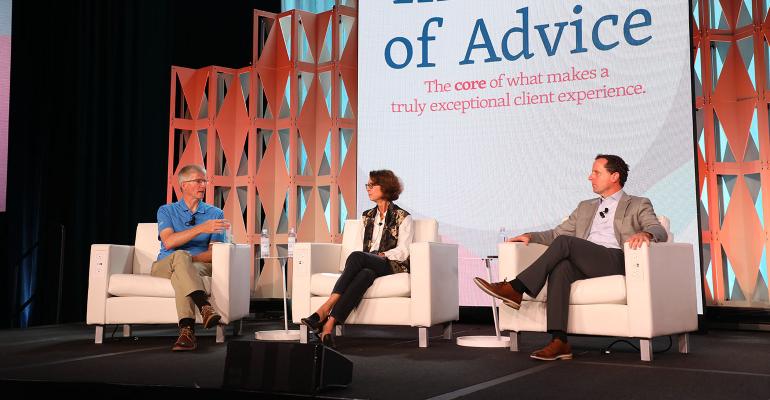 Speaking at the eMoney conference with President of Fidelity Institutional Michael Durbin, Fidelity's billionaire chairman said her firm, which does not sell order flow, can compete on better trade execution.

The billionaire chairman of Fidelity, Abigail “Abby” Johnson, addressed the firm’s decision to eliminate trading commissions for stocks, ETFs and options at this week’s eMoney Summit in Austin, Texas. The topic arose in a conversation between Johnson, the president of Fidelity Institutional, Michael Durbin, and eMoney CEO Ed O’Brien, who said he didn’t learn of the decision until it was reported in the media.

“It’s what keeps our lives interesting, I would say, and challenging,” she added, laughing.

The move to zero fees wasn’t a surprise, she said. “We've been anticipating this, particularly in areas that are the more commoditized types of services in our business. Top of the list was index funds,” she said. Fidelity eliminated management fees on certain ETFs last year.

“I would argue that brokerage commissions are not a commodity,” she said, “but they have increasingly been commoditized in a number of ways.”

O’Brien pointed out that there are still costs associated with making a trade and questioned whether the move to zero commissions is sustainable.

“It is a complicated question,” said Johnson. She pointed out that “many firms” sell order flow, but Fidelity does not, potentially giving registered investment advisors and traders on the platform a better execution price. “That’s an important differentiator, depending on how far down that path you’re willing to go.”

For firms that do accept payment for order flow, lost revenue from free trades can be more easily absorbed, she said. “If you’re small and you’re really just doing brokerage, [selling order flow] is the path that you have to follow.”

“Our path is a lot different,” she explained. “We are offering lots of different ranges of services, and we hope people will be willing to pay us for things that are really truly value-added and differentiated.”

When the decision to cut commissions was made, Durbin said he heard from advisors who were concerned that service levels might be cut. "Not all trades are created equal," he said, adding that he hoped Fidelity could lead the charge in showing investors how firms that sell order flow might not provide the best economics to that investor.

“Good trade execution, particularly for practices that are increasingly using individual securities and ETFs, you’ve got to pay attention to where that order’s being routed,” he added. “If you don’t know what the product is, you’re probably the product.”