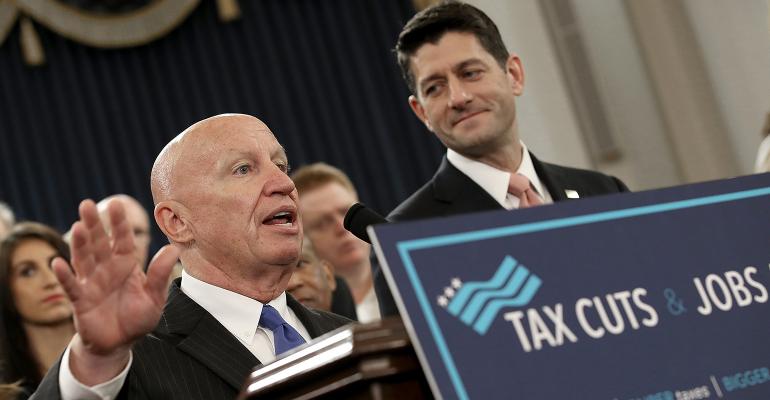 Deep Dive Into The Tax Cuts and Jobs Act - Part 1

An overview of the immediate implications.

On Nov. 2, 2017, the House Ways and Means Committee issued H.R. 1, called “Tax Cuts and Jobs Act.” The proposed bill itself is about 430 pages, and the summary about 82 pages. The provisions appear to affect almost every aspect of tax, estate and other planning, far more than what anyone anticipated. While there’s certainly been inadequate time to even make a cursory review of the proposal, there seems to be significant proposed changes, some never previously discussed, that require immediate action by practitioners just in case they are enacted. Other provisions may not require current action, but at least might warrant consideration.

No doubt some of the comments in this article will be outdated quickly by new changes proposed. (The Chairman’s mark-up is already effecting changes, but this article contains a number of practices and client-related recommendations that are worthy of immediate action.) Nonetheless, it seems worthwhile to review and analyze the current provisions to properly guide clients now, just to understand the trajectory tax reform is taking.

Comprehensive, But Still Just a Proposal

The Act just rolled out by the House Ways and Means Committee is still subject to reconciliation and will likely face revisions before it lands on the president’s desk for signature. However, regardless of the many possible flaws in the Act as noted in this article, and there are likely many others given the Republican majorities in both houses of Congress, some form of the Act might well be signed into law.

Nonetheless, since the Republicans have a slim 52-seat majority in the Senate, the permanence of any such plan is very much in question because of the so-called Byrd provision, which requires 60 votes (a filibuster-proof majority) to enact any law beyond 10 years. Further, since the Act doesn’t provide for full repeal of the estate tax until 2024—after the next presidential election—there’s a possibility that a new administration will replace the law before a full repeal.

In short, there may be a limited window to take advantage of the significant transfer tax planning opportunities presented by this Act. The non-transfer tax provisions of the the Act raise a myriad of other issues.

While the stated goal is tax simplification and lower taxes, it isn’t clear that either goal will be fully achieved. While eliminating deductions and raising the standard deduction will clearly simplify tax planning and tax return preparation for large numbers of taxpayers, simplification will certainly not be achieved for many. The new rules on pass-through entities appear to be incredibly complex, creating new concepts and planning implications. These rules might have a significant impact on how closely held business entities are structured, perhaps even when people choose to retire.

As another example, the elimination of the tax deduction for alimony for the payor on new divorce agreements, as well as not including alimony as income to the payee, appears on the surface to simplify tax planning and compliance. But does it in the broader sense achieve simplification? By changing the fundamental tax implications of divorce agreements that have been in force for a very long time, will this really achieve simplification or will it create complexity and potential problems for matrimonial practitioners and the many taxpayers who divorce each year? Will it create new issues that everyone must digest and evaluate on how property settlement components of a divorce need to be negotiated relative to alimony payments? How will judges synthesize the new dynamics when handling matrimonial cases?

Will the Act Cut Taxes?

Although President Donald Trump referred to act as the "Cut, Cut, Cut bill,” it doesn’t appear that it will in fact provide a tax reduction for all taxpayers.

No doubt many taxpayers will have their tax bills lowered. But others, especially wealthier taxpayers, may not find that the results overall are favorable. Worse for some, the determination as to the tax impact won’t be easy to evaluate. The impact might also be quite disparate. For example:

The Act might mitigate one worry that had existed for ultra-high-net-worth clients. That was the contents of the Senate Finance Committee Report, which was issued in October and demonized practitioners for guiding clients to pursue tax planning ranging from annual gifts to more advanced techniques. (The U.S. Committee on Senate Finance, “Estate Tax Schemes: How America’s Most Fortunate Hide Their Wealth, Flout Tax Laws, and Grow the Wealth Gap,” Oct. 12, 2017.) While it might still be possible that any final tax bill could toughen the transfer tax rules to raise revenue for other tax reduction, that seems less likely, considering the Act excluding any mention of this.

The most likely to be hurt by the proposals are moderately wealthy taxpayers who live in high tax states that had before benefited from large state and local property tax and income tax deductions on their federal income tax returns, and who don’t have estates large enough to benefit from the increased transfer tax exemption. There will be those in a “sweet spot” of net worth who might benefit significantly from the increase in the exemption. Those with ultra-high-net-worth, who face loss of deductions, may not benefit in a significant way from what, relative to their estates, is an insignificant bump in the exemption. This assumes that the ultimate repeal of the estate tax may never occur so that the UHNW taxpayers will never actually realize that benefit. Again, the tax implications to wealthy taxpayers may in fact vary considerably depending on the circumstances.

How Will the Act Really Affect Revenue?

The 82-page “Section-by-Section Summary” includes fiscal impact estimates of each provision. It seems a wonder how some of these estimates could be made so quickly. It seems even more questionable how provisions, such as the impact of the pass-through entity maximum tax rate, could be fiscally scored when the implications are so complex and uncertain. By way of example, the change resulting in the taxation of certain employee awards is scored to generate over $3 billion in 10 years. Is that realistic? Other estimates seem potentially unrealistic as well.

The increase in the transfer tax exemption is scored as reducing revenues by $172.2 billion. It seems incredible that this change would be enacted given the other potential costs of the Act and the fiscal and societal issues facing the United States now. There’s no indication how this figure was estimated. Is this merely a tally of lost estate and gift taxes, or does it also include a reasonable evaluation of the likely, potentially significant decline in capital gains tax revenue? All but the UHNW clients should be able to avoid paying capital gains tax by maximizing the wide range of basis maximization planning techniques practitioners have been discussing for the past several years. If the capital gain tax loss isn’t realistically factored into the scoring, the impact of this change on the federal fisc over time will grow dramatically costlier.

The inflation adjustments in the tax laws appear to be modified to index for inflation using the consumer price index as a so-called “chained CPI” instead of the CPI to lessen future increases.

Another accommodation to the economic realities of the tax cut proposals, the political talk of tax reductions being retroactive to the beginning of 2017, has been dropped, and most changes only take effect in 2018, likely to endeavor to present the Act as having less of a negative impact on the budget.

Simplification is good. Few could argue with that. But dramatic changes to long-time tax laws that have been embedded in economic decision-making for years may have disruptive consequences which are difficult to evaluate, especially on the hyperdrive time frame the president is using to push through tax reform. Removing the tax impact of alimony, for example, could have dramatic impact on every divorce currently in process and will change the landscape for all future divorces in ways that may not be readily determined or determinable. The emasculation of the SALT deductions will have very different impact on taxpayers depending on their state of residence and circumstances. Lower income tax rates might make it difficult for states struggling from the SALT changes to raise funds in that manner as well. While that’s hard to predict, perhaps more worrisome is the impact on the high tax states that may face a tax-driven exodus by their wealthy citizens, thereby eroding their fiscal condition. Some of the states that may be affected are currently in questionable fiscal health, so might this change push them to the brink? There appears to have been inadequate analysis of the possible implications of this. Many of the other changes in the Act, even if simplifying in terms of the tax law, may prove disruptive to the industries affected or the specific taxpayers.

Disruption, change and uncertainty are not likely to prove big boosts to the economy. Practitioners will have to be careful not to draw general conclusions from the impact of the Act, or whatever version (if any) is enacted, as the implications to each client might vary significantly, much of the impact may prove indirect and more difficult to ascertain.

There’s little time to act before year end. Taking action in some instances might be critical to secure important tax benefits. On the other hand, at the time of this writing, the Act is merely a proposal that might change significantly before enactment, or perhaps nothing will be enacted this year. The puzzle for practitioners then is what to advise clients.

Some firms are sending mailings to clients highlighting planning opportunities and inviting clients to come in for meetings. Some are including a year-end planning checklist. But there’s an opposing view among noted commentators as well. There’s no means of guesstimating the likelihood that anything you inform clients now will reflect what is ultimately enacted. With this continued uncertainty, how do practitioners advise clients? While the Act and the buzz around it promote across-the-board tax cuts, is that really the case? Will the 39.6 percent rate, coupled with SALT restrictions or eliminations effectively result in a tax increase or decrease? It isn’t clear for all taxpayers whether they will have an increase or decrease.