/sites/all/themes/penton_subtheme_wealthmanagement/images/logos/footer.png
Recent
Recent
Thanks to Pandemic Puppies, CRE Investors Are Turning Their Attention to Veterinary Clinics
Aug 08, 2022
Seven Must Reads for the CRE Industry Today (Aug. 9, 2022)
Aug 08, 2022
KKR Sees ‘Golden’ Chance to Snap Up Risky Debt Amid Market Chaos
Aug 08, 2022
IRA Legacy Gifts Are Just Around the Corner
Aug 08, 2022
Featured
The 10 Best and 10 Worst States in Which to Retire in 2021
Jul 15, 2021
Poll: 15 Classic Books on Investing and the Markets
Apr 03, 2020
Fifteen Must-Listen Business Podcasts for Advisors
Aug 14, 2020
Celebrity Estates: Jay Leno and Planning for Classic Car Collections
Feb 22, 2022
Trump Tax Reform
brought to you by 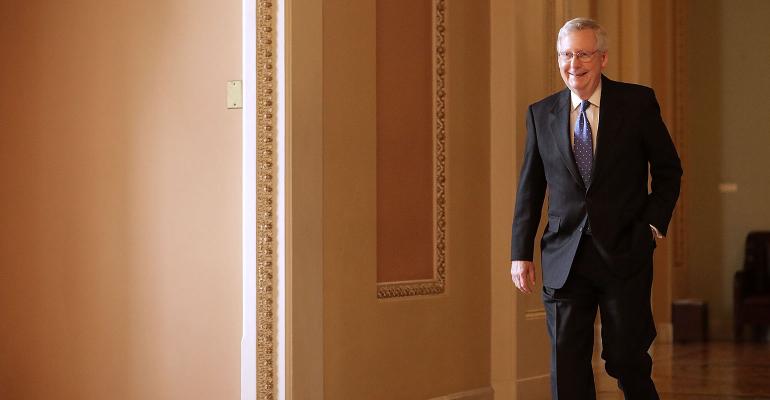 Everything You Need to Know About the Senate GOP Tax Proposal

How the Senate plan differs from the House.

By Erik Wasson and Sahil Kapur

(Bloomberg) --Senate Republicans released their vision for a tax-cut plan Thursday that would cut the corporate tax rate to 20 percent, with a one-year delay to 2019, as Congress moves quickly to fulfill one of the GOP’s biggest and most long-awaited goals.

The House proposal released a week earlier also would reduce the corporate rate to 20 percent from the current maximum of 35 percent, though it would take effect in 2018. The Ways and Means Committee approved the measure Thursday after releasing revisions. The measure could be changed again in the Rules Committee before it reaches the House floor. The Senate plan would have seven individual tax brackets and would eliminate state and local tax deductions. The Senate Finance Committee plans to begin considering the plan early next week, while the House plans to vote on its bill next week.

A Senate summary didn’t include details on a number of business tax provisions. Here’s how the Senate proposal compares with the House version so far on some key areas, updated throughout the day:

WHAT’S IN THE SENATE BILL: The Senate would include seven individual brackets of 10 percent, 12 percent, 22.5 percent, 25 percent, 32.5 percent, 35 percent and 38.5 percent. The last one would be a decrease from current law’s top individual rate of 39.6 percent. Thresholds for each bracket weren’t immediately available.

SENATE BILL: Preserve the existing mortgage-interest deduction for home purchases with up to $1 million of debt.

HOUSE BILL: The home-mortgage interest deduction would be reduced for new purchases to $500,000 of debt from the current $1 million. The bill would also limit the deduction to one principal home, ending the break for second homes.

SENATE BILL: Roughly doubles the standard deduction to $12,000 for individuals and $24,000 for couples.

HOUSE BILL: The estate tax would end after 2023. Before then, the current $5.49 million exemption for individuals would be doubled.

SENATE BILL: A corporate tax-rate cut to 20 percent would be delayed by one year to January 2019, according to GOP Senator Bill Cassidy of Louisiana.

HOUSE BILL: The corporate income tax rate would be a flat 20 percent starting in 2018.