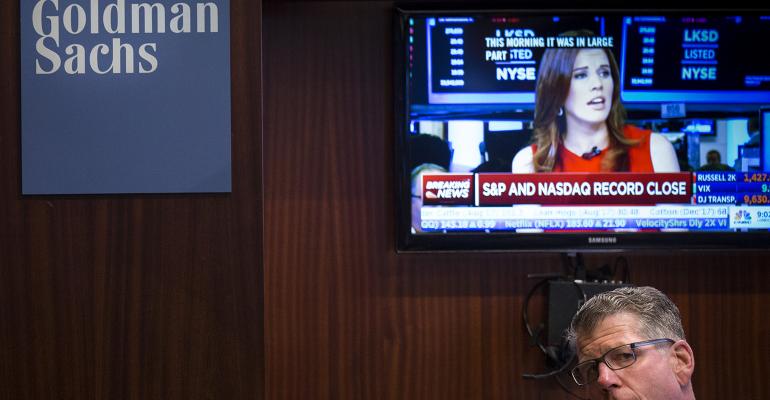 Goldman Sachs has been quietly building RIA custodial services behind the scenes, with big-name hires and plenty of resources; but can it overcome its Wall Street heritage to appeal to independent advisors?

Last May, Goldman Sachs announced its acquisition of Folio Financial’s clearing and custody technology, and since then the Wall Street firm has been quietly building out a custody offering for registered investment advisors, poaching top executives from some of the largest RIA custodians in the country.

And while Goldman has made no formal announcement around its RIA custodial service, industry observers say it's a smart strategy; there’s room for Goldman and other smaller custodians to pick up market share from some of the larger, rapidly consolidating players; for instance, some advisors have complained of subpar service levels at Schwab in the midst of its integration with TD Ameritrade, though that has yet to be completed.

“If Goldman can figure out a more robust offering that really speaks to a part of the market, and they’re offering something along with it, I think there are enough people who are disenfranchised with their custodian that it may make sense,” said Karl Heckenberg, president and CEO of Emigrant Partners and its affiliated company Fiduciary Network.

Will Goldman Sachs appeal to RIAs? On the one hand, the brand has a certain cachet among the high-net-worth and ultra-high-net-worth, with its history of providing structured investment products. The firm is traditionally known for its asset management, investment banking and capital markets desks. To many, it also represents stability, which could be a positive thing for risk-averse clients looking for a place to park their assets.

Related: A Goldman Sachs Play in the Custody Game

But for many independent advisors, Goldman represents just another large Wall Street firm, the antithesis of the business model they say appeals to them and their clients.

“I just think it’s going to be a tough pill to swallow to enter a fiercely independent RIA market with the Goldman Sachs name attached to it,” said Manish Khatta, president and chief investment officer at Potomac Fund Management.

“Goldman Sachs is excited to bring its decades of custodial experience to the RIA market and believes its offering will be incredibly attractive to independent advisors," said Maeve DuVally, a spokeswoman for Goldman Sachs.

What Is Goldman Building?

The firm has released little information about its custody offering, but it has been putting together an experienced team to spearhead the effort. The firm has tapped Adam Siegler, head of the private investor products group at Goldman, and Cameron Brien, an engineer at Goldman, to co-lead the division.

In an interview with WealthManagement.com in February, Joe Duran, head of Goldman Sachs Personal Financial Management, said PFM remains multicustodial and does very little business with the in-house custody platform. His division has billions of dollars with Fidelity, and Schwab and doesn’t want to put those relationships at risk.

Goldman is currently working on how to custody assets that the big custodians don’t hold today, such as structured notes, for example, Duran added.

Tim Welsh, president, CEO and founder of Nexus Strategy in Larkspur, Calif., believes Goldman will succeed in gathering market share in the RIA custody business, as long as the firm leads with those niche products and services aimed at high-net-worth investors. That has been their legacy for many years. If an RIA has worked with one of the major custodians up until this point, it often had to go to an investment bank to get such services.

But like most custodians who have made it, Goldman will have to start out by capturing just a slice of advisors’ books of business and then work their way up.

“It’s hard to compete with Schwab and Fidelity, head-to-head; and moving custody is painful, so your best bet is to try and figure out what would differentiate your offering in more of a niche capacity and have them added as a custodian as opposed to expect that firms are going to transition existing assets off of other custodial platforms,” Heckenberg said.

The Rise of the Small Custodians

Observers say it’s getting easier for smaller, niche players to get a foothold in the RIA custody space. Jason Wenk, CEO of RIA-focused custodial and technology platform Altruist, said it’s a common misconception that smaller players like himself are trying to compete with Schwab, for instance.

“There’s more than enough business for everybody. This is a very fast-growing segment of the advice space,” he said.

In a report on the wealth management industry in December 2020, Aite Group said the recent consolidation in the custody space prompted fears among advisors that choice is being constricted, which could lead to higher fees and lower budgets for improvements to the platforms. That may bode well for more-nimble competitors.

“One thing is certain—the journey will be long, as merging the two platforms will take years—time that will be used by competitors to entice them away ... from Schwab and TD Ameritrade,” writes Alois Pirker, research director for Aite’s Wealth Management practice. “Firms such as Goldman Sachs—which has recently acquired Folio Investing and, with that, Folio’s RIA custody business—might very well use this time to create additional attractive offerings for RIAs looking to change custodians.” 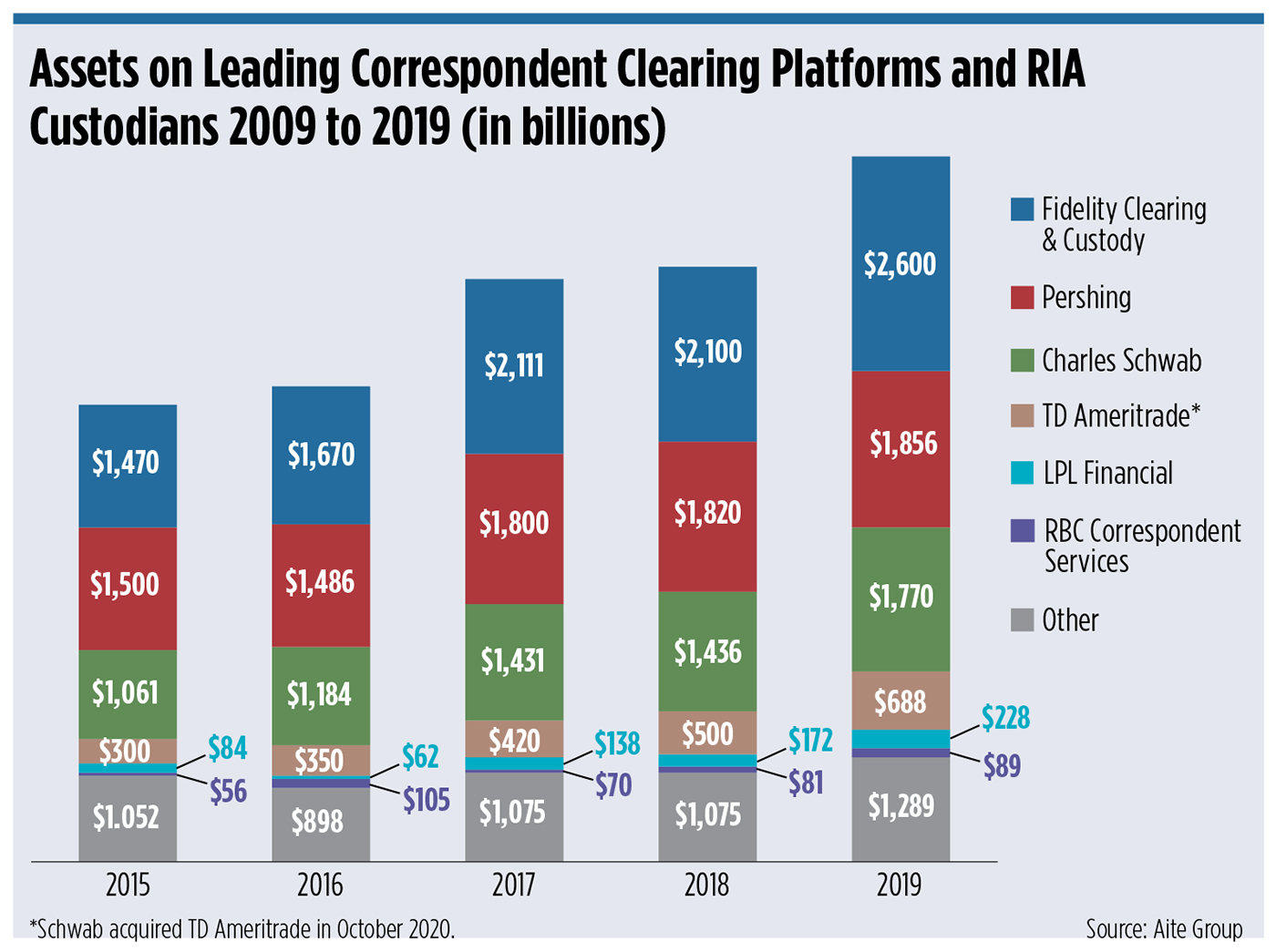 But Wenk stressed that Goldman has a lot of work to do in terms of rebuilding Folio’s technology.

Still, “I think Goldman will fill a really nice void. I think they have probably a better chance than Fidelity or Schwab at releasing a better technology for advisors to use—more seamless and integrated technology,” he said.

Heckenberg agreed that RIAs are becoming increasingly open to more niche custodians. He pointed to what happened recently with Apex Clearing, a clearing and custody firm that touts Goldman’s Marcus as one of its clients. The firm recently went public through a merger with Northern Star Investment Corp. II, a special purpose acquisition company, or SPAC, a transaction valued at $4.7 billion.

“For someone like an Alto, I think it’s a huge opportunity because they’re defining their market very narrowly and there’s a very unmet need to provide a more digital experience for alternative investments, specifically in retirement accounts,” Heckenberg said. “If [Goldman looks] at different areas where existing RIAs have a lot of pain points, I think that would definitely be something I’d be paying attention to.”

Many RIAs who came out of the wirehouse world will tell you they left the big Wall Street firms so they could gain independence and more autonomy over running their own business. Many will cite their desire to provide unbiased, fiduciary advice to their clients, without conflicts of interest or pressure to sell proprietary products. So for many, to align themselves with a big Wall Street firm such as Goldman Sachs might be a tough sell.

“It’s a well-known brand and lots of stability. But a lot of RIAs—that’s the antithesis of what they want to do. People go to the RIA channel to not be part of those institutions,” Wenk said.

At the same time, a custodial service that can accommodate the offerings and services that keep advisors inside the Wall Street firms—structured products, securities-based lending, alternative investments—while still running their own business with an open architecture, could hold an appeal.

Wenk believes Goldman could have success recruiting wirehouse defectors who desire independence as well as an association with a major Wall Street brand.

Potomac’s Khatta has a more cynical view. Consider Goldman's involvement in numerous high-profile scandals over the years, including its part in packaging and selling toxic mortgage-backed securities to investors, while simultaneously shorting them in the market, during the run-up to the Great Recession of 2007–09, famously prompting Rolling Stone magazine to describe the investment bank as a "great vampire squid wrapped around the face of humanity, relentlessly jamming its blood funnel into anything that smells like money." While its reputation has recovered since then, Khatta said it is a bridge too far to cross for many RIAs.

Further, Goldman has been making a big push into the retail space via Marcus, its online banking tool, and Marcus Invest, its automated investing app, which Khatta said will compete with RIAs for retail clients.

“RIAs today aren’t going to fall in love with shiny new toys like they may have in the past,” he said. “I think it’s going to be a tough road. No matter how much makeup they put on the pig, it’s still Goldman Sachs.”