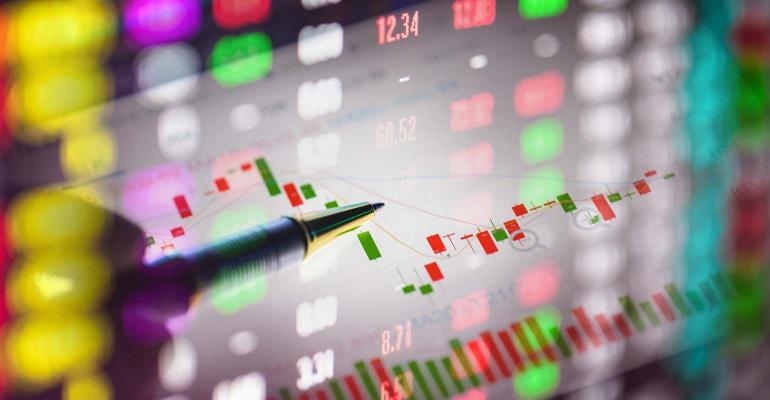 Are Model Marketplaces Living Up to Their Promise?

Model portfolio marketplaces on fintech platforms were hyped as the next wave of innovation for indie advisors. But some asset managers say the money is just not showing up.

Four years ago, the wealth management industry was abuzz about the proliferation of model portfolio platforms.

Several fintech companies and vendors launched, alongside their core offerings, variations of the model marketplace, including Riskalyze, Orion Advisor Services, TD Ameritrade, Morningstar and the now-defunct Oranj and RobustWealth, to name just a few.

The promise was high; advisors could get “freemium” access to model portfolios from the likes of Vanguard, BlackRock, American Funds and others, freeing them up to focus on financial planning and business development. For asset managers, it was a chance to get their name, and funds, in front of advisors, especially those in the coveted RIA channel, and gather new assets.

Some argued that these model marketplaces would present a competitive threat to turnkey asset management platforms like Envestnet; unlike with a TAMP, in a model marketplace the advisors retain control and discretion to implement the trades themselves.

But after a wave of announcements, asset managers say these platforms have not delivered on their promise to attract advisors, even as some concede the platforms have elevated their name recognition.

“Our TAMP business has grown almost 1,000% if not more, in the past 12 months,” said Manish Khatta, president and chief investment officer at asset manager Potomac Fund Management. “Literally not $1 has come in through the multiple model marketplaces we’re on.”

The marketplace providers may have misread the demand among advisors. “There was an expectation, as these model marketplaces raised capital and launched these technological solutions into the marketplace, that there was this huge pool of assets that they were going to be able to go after,” said Casey Dylan, chief operating officer at Symmetry Panoramic Funds. “At the same time, you had broker/dealers closing the doors for their in-house advisors to go outside their system and adopt platforms that weren't their own. I think the expectation that there was this huge pool of assets that were going to be in play, I don't think that ever really materialized.”

While there’s little hard data on the assets in these marketplace models—primarily because the advisor maintains discretion—Cerulli Associates said in a 2020 report that the percentage of model assets moving through the fintech marketplaces is limited. These platforms account for an asset-weighted average of just 4% of model provider assets, the report said.

At the same time, 46% of model providers said they believed the fintech model marketplaces offered the greatest opportunity for them to distribute their models in 2020, up from 30% in 2018, Cerulli found. 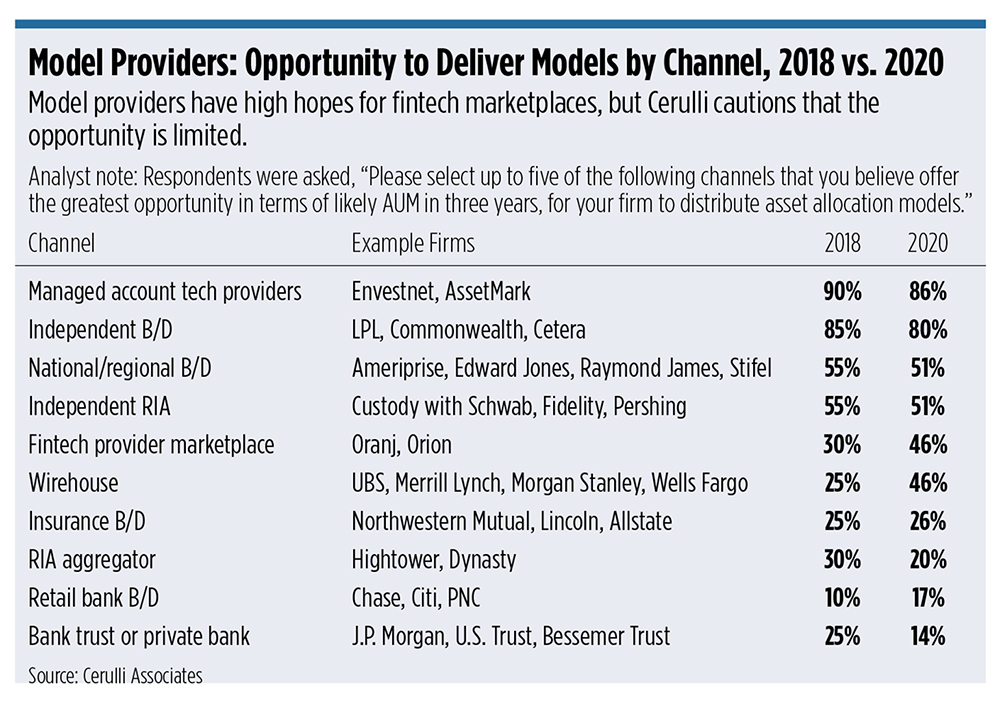 But that optimism is squishier, said Brendan Powers, associate director of product development at Cerulli.

“Most model assets are implemented in b/d managed account programs or through managed account tech provider (e.g., Envestnet) marketplaces,” he said. “Model providers are excited about the prospects of the fintech model marketplaces because they serve RIAs, but RIAs are not adopting models to the same extent as b/ds.”

“The problem is when (advisors) go to these tech providers, they go for the tech, not staying for the model portfolios,” Powers said. “They’re still acting in a “rep as portfolio manager” (Rep as PM) capacity. There’s not a lot of AUM moving through those fintech model marketplaces. Therefore, those model providers haven’t really found a lot of tangible success there yet.”

Add to that that many of the tech providers are still relatively small. “A lot of those fintech providers are still accumulating assets themselves,” said Scott Smith, director of advice relationships at Cerulli. Take Oranj, for example, which ceased operations at the end of 2020. “First they have to get assets onto the platform, and then we have to convince them to use the models.”

And despite talk of investment management becoming commoditized, $16 trillion of the $24 trillion in 2020 estimated advisor assets are managed in-house, Cerulli said. If you break it out by channel, just 11% of independent broker/dealer advisors outsource their investment management, while just 2–3% of RIAs—the advisors targeted by these fintechs—are outsourcers.

Several years ago, WealthManagement.com reported that b/ds were nudging advisors away from rep as portfolio manager programs (Rep as PM) in favor of model portfolios and third-party strategists, due to increased regulatory scrutiny.

“The Twitter 25- to 35-year-old advisors that are screaming about financial planning, that’s not the reality of our business; that’s just the people on Twitter who are the loudest,” Khatta said.

“The reality of our business is, it’s still asset management-driven, whether it’s outsourced or you’re doing it yourself. That’s still the driving revenue across every advisor’s book of business.”

Symmetry’s Dylan said his firm does have assets on these fintech model marketplaces, but that’s because the firm was pulled onto them by demand from existing clients. His firm also has its own TAMP.

He believes the adoption rates have been so low because of advisors’ hesitancy to outsource investment management.

“There's still a stigma associated with, ‘Well, my value prop to my client is I pick the investments. I'm an investment manager. And if I outsource that to a model provider, what then is my value prop? How am I going to make a living telling my clients that I'm going to charge them 75 basis points or 100 basis points?’” Dylan said. “I think that has depressed the adoption of these model marketplaces in the RIA space.”

Khatta argues that if an advisor has the infrastructure in place to execute trades, they likely have the knowledge and ability to conduct their own investment research and build portfolios.

“If you have the infrastructure and the bandwidth to execute your own trades, you probably aren’t going to go to a model provider,” he said. “You’re going to do it yourself. And that’s why I don’t think [the model marketplace] is working. It’s trying to solve a problem that doesn’t exist.”

Advisors who use TAMPs want to outsource all aspects of investment management, including the trading, rebalancing and compliance work, Khatta said. Under the model marketplace, the advisor is just getting the trade signals, and they have to make sure the trades settle properly.

Cerulli’s Smith argues that just because an advisor has the bandwidth to trade, doesn’t mean he or she is qualified to do so.

“Of the 300,000 advisors in the U.S., 50% of them are below average at portfolio maintenance,” he said. “If clients don’t really care that you’re doing that, you’re not adding value to the practice. Every bit of research we’ve done says the more time you spend in front of clients—either meeting with your existing clients or prospecting new clients—the more your revenues are going to go up, the bigger your practice is going to get.”

Scott MacKillop, CEO of First Ascent Asset Management, agrees that if an advisor chooses to outsource investment management, they might as well outsource all of it.

“If you keep the operational side of it, that's a daily task then that you have to deal with,” MacKillop said. “You have to have staff that work on that, and it doesn't really free up very much time. You may have outsourced the asset allocation part of it, but that doesn't really get you the full benefit.”

MacKillop admits that when these model marketplaces first started cropping up, he was scratching his head wondering why advisors would use them, especially fiduciary RIAs. Sure, big, high-profile asset management firms were offering up their models for “free,” but many of them contain proprietary products.

“Especially in the RIA context, I thought that there was a pretty strong bias in favor of open architecture, and getting models from big asset management firms that contained a lot of proprietary product, that didn't seem like it was consistent with the fiduciary ethic,” MacKillop said.

Derek Hernquist, head of advisor experience at Aptus Capital Advisors, an asset manager with about $3 billion in assets under management, said his firm has had success on the model marketplaces with advisors who want to incorporate the models without completely letting go of control. Aptus has had significant traction on the marketplaces in getting name recognition, and it’s led to some good conversations with RIAs looking for a collaborative partner.

“Where we've really had our best discussions have sometimes come out of people that were just doing a search on one of these model marketplaces and deciding, ‘I would love for somebody to help just consult us on what am I doing right now that actually works? And what areas do I want to just supplement what I'm doing already?’

Licensing a model to clients is a more collaborative arrangement, rather than “someone who is just going to sign up and subscribe to your models and use them and then you never talk to them,” Hernquist said. “It's much more of a kind of holistic discussion about how they can take the blueprint you've been using and improve it. We spend a lot of time helping them tell the story to clients about what their investment philosophy is and why they are using these portfolios.”

It’s having discretion over the models, and the ability to deviate from it when needed, that still holds an appeal to advisors, Hernquist said.

“Every advisor has their top 20% of their client base who just doesn't fit a model. They have tax issues or legacy issues, or something that they need to talk to somebody and then think through. That's probably where we spend most of our time, is just helping think through and manage how to handle those exceptions and where you would maybe still get the benefits of the consistency but be able to tweak things enough so that your top key custom type clients are still getting exactly what they need.”

Cerulli’s Smith agrees that such collaborative conversations can help wholesalers differentiate their models, beyond just showing up with coffee and bagels.

“These portfolio conversations, I hope, are the next step beyond showing up with a Morningstar factsheet and saying, ‘Here, buy my five-star fund,’” Smith said. “Having a nuanced conversation about, ‘How are you managing client portfolios? Here’s what my experts say. Maybe we can tweak your models a little bit with our recommendations,’ is a valuable thing.”

MacKillop said First Ascent, which does not put its models on model marketplaces, is currently running custom models for a number of clients, designed to let them be involved. But that model currently doesn’t work very well at scale, he said. He expects there will be some scalable options for doing so in the next five years.

“It’s really important to not just put your model up there and expect something great to happen; the assets aren't just going to flow there,” MacKillop said. “Firms that are really good at supporting advisors and explaining changes depending on information and so forth, that support them if they're using those portfolios, those are firms that could do well in the future as advisors start to use these marketplaces more frequently.”