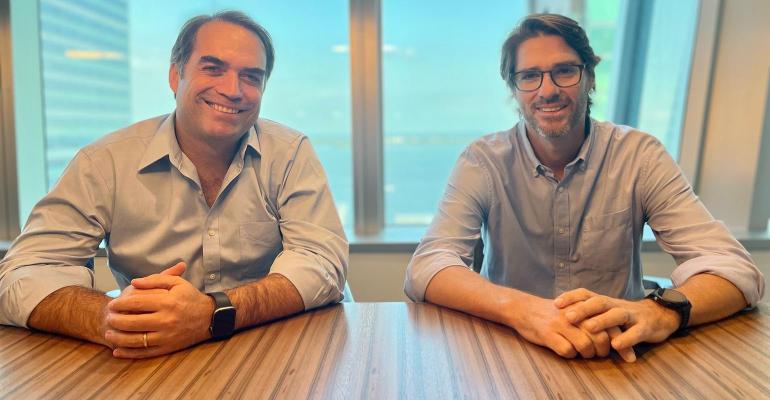 The Miami-based team led by Rodolfo Rake and Santiago Rey is focused on serving Latin American clients at home and abroad.

Diagonal Investment Office launched in Miami this month with $200 million in client assets and a mission to offer family office services to ultra-high-net-worth Latin American clients.

The firm was created with support from Sanctuary Global, Sanctuary Wealth’s international platform, and is led by industry veterans Santiago Rey and Rodolfo “Rudy” Rake. It is the 10th firm to join Sanctuary Global since it launched in May 2021 with a focus on Latin American markets and recruited Rake to serve as managing director and head of middle markets.

Prior to his career in financial services, Rake played professional tennis. As a teen in the 1990s, he ranked No. 1 in the U.S. twice, beating out other young players such as Roger Federer and James Blake. He retired in 2001 and went on to graduate summa cum laude from Florida Atlantic University in Miami in 2004. Rake started at Smith Barney the next year and quickly became one of the youngest managing directors in the firm’s history, with a focus on serving Latin American clients. He said he left Morgan Stanley Smith Barney after more than 16 years because he became frustrated with the culture and constraints he encountered at the wirehouse.

Rey spent four years with Banco de Credito in Lima, Peru, before joining JP Morgan in 2007, where he headed up the New York and Geneva investment desks while earning his master’s degree in finance from Columbia Business School. Prior to Diagonal, he was a partner in GAMNIC Family Office and founder of Acorde Inversiones Familiares in Lima.

After joining Sanctuary, Rake called up his old friend and proposed the new partnership. “With Diagonal," he said, "we are taking a U.S. fee-based model of fiduciary wealth management that leads with financial planning and adapting it to our Latin American clients."

In less than a year of planning and preparation, Rake and Rey have put together a prelaunch client list with $200 million in assets and are already receiving new referrals.

“We're managing a few families,” said Rey. “Totally open architecture where we're helping them with their whole net worth at a couple different banks.” Now that a bilingual website is up and running, he said, “we see a lot of potential for growth.”

The ability to manage assets custodied at multiple banks for a client is rare in Latin America, limiting investment choices and making comprehensive oversight difficult, said Rake and Rey, positioning Diagonal to provide a unique service in those communities. In addition to a growing client base in the Miami area, the firm has clients in Peru, Mexico, Colombia and Chile.

“That market is heavily transactional” said Sanctuary President Robert Walter. "Rudy and Santiago are introducing them to a better and more efficient fee-based model.“

“What we mostly help them to do is to pick the correct ones, to pick the right ones for them and avoid those that are not cost-efficient or are underperforming, difficult to understand, illiquid,” he said. “And those are what’s mostly been offered by the regular banking industry.”

Both 43 years old, Rake and Rey grew up together in Lima, where they attended the same middle and high schools. Years later, they both ended up working in finance in New York City—Rake at Morgan Stanley and Rey at JP Morgan—where they developed a close friendship that continued after Rake moved to Miami and Rey returned to Lima to open a business managing funds for institutional clients.

When the pandemic hit and the funds Rey managed in Peru dried up, he said he was presented with a new opportunity as wealthy local families approached him for help managing portfolios that had been impacted by the global crisis.

“We started working together,” said Rey. “Rudy on the execution desk in Morgan Stanley and I was giving advice locally to these families.” When Rake made the move to Sanctuary, Rey decided to move his accounts with his friend rather than keep them at the wirehouse. The two began planning to launch their own practice on the platform, choosing the name Diagonal because it describes the most efficient path between two unaligned points and is spelled the same in both Spanish and English.

Also joining the Diagonal team is Senior Portfolio Associate Gisselle Balza, who brings more than 18 years of experience to the position, including almost seven years as private wealth management associate with Morgan Stanley in Miami.

“I think the next five years are going to be big,” said Rake. “There’s not a lot of family offices that can use the leverage of a $25 billion platform with all the capabilities and resources that brings to the table. I think that's very potent in terms of growth.