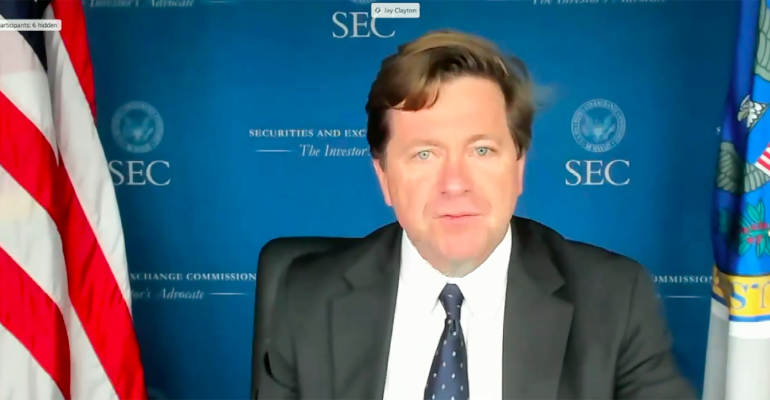 Panelists at a roundtable co-hosted by the SEC and FINRA spoke about their initial observations of how Regulation Best Interest compliance has gone since the rule's implementation earlier this year.

Throughout the past year, both the SEC and FINRA reiterated that they would be looking for “good faith” efforts at compliance with Regulation Best Interest and Form CRS mandates during initial reviews and examinations. So far, for the most part regulators are seeing such efforts, according to panelists during a virtual roundtable co-hosted by both agencies.

However, the lack of disciplinary disclosures reported by The Wall Street Journal (and cited by SEC Chairman Jay Clayton at SIFMA’s annual conference last week), was front of mind for examiners, with Jim Wrona, vice president and associate general counsel at FINRA, calling it “the biggest issue” they had seen since the rule was implemented.

In his introductory remarks today, Clayton also noted that SEC staff had observed some firms not providing adequate disclosures about their disciplinary history, though he framed the conversation around disciplinary disclosures as a sign of progress.

“It’s now even more apparent that historically, before Form CRS, this information was not being brought to the attention of retail investors as it should have been,” he said.

Related: Advisory Firms Have a Ways to Go on 'Lasting' Reg BI Compliance

Overall, SEC and FINRA staff said firms made significant progress toward complying with each of Reg BI’s four obligations—disclosure, care, conflicts of interest and compliance.

Bill St. Louis, FINRA's senior vice president, member supervision, said firms were putting policies in place to ensure compliance, with many leveraging the work they’d done to prepare for the now-vacated DOL fiduciary rule. His main concerns centered on procedures not being memorialized properly, as well as policies without details on who was responsible for them, and a lack of planning to test them.

John Polise, the associate director for the Broker-Dealer and Exchange Examination Program (BDX) at the Commission’s Office of Compliance Inspections and Examinations (OCIE), said he’d seen many strong examples of Reg BI training, but worried some was focusing heavily on the requirements of the rule, rather than how firms would expect registered representatives to comply with it.

“If you haven’t conducted training, please do so, and please confirm you give guidance on how to comply with the rule, as well as compliance with the rule itself,” he said. “Because, I think that’s where we’ll see issues coming up and you’ll give your registered reps the best opportunity to be in compliance.”

Polise also stressed that while firms were encouraged to build on existing regulatory practices, they should not merely substitute their suitability standard for best interest and expect little else to change; for example, he noted firms following a suitability standard would not meet Reg BI’s standard of disclosing and mitigating (and, if necessary, eliminating) conflicts of interest.

Lourdes Gonzalez, an assistant chief counsel for sales practices at the SEC’s Division of Trading and Markets, said firms should consider applying more compliance analysis on the communication between financial advisor and investor, saying the closer the communication is to a call to action or the more personalized it is to an investor, the likelier it is a recommendation where the rule would apply. She also stressed that cost was one factor firms needed to consider, but that didn’t necessarily mean the lowest-cost option was the best option.

“A broker would not satisfy the care obligation by suggesting the least expensive or least remunerative security without thinking any further about the other factors or the retail customer’s investment profile,” she said.

On a separate panel on Form CRS findings, Jim Reese, chief risk and strategy officer at the OCIE, said the delivery of Form CRS had gone mostly well, with more than 10,000 forms submitted to the SEC thus far. Alicia Goldin, senior special counsel with the Division of Trading and Markets, said there were instances where firms did not provide any response to the disciplinary history section, or tried to include extraneous language to help “explain” the disciplinary issue.

Goldin stressed that firms could not omit or modify the required heading, and must answer in a yes or no response on the form (though it can provide clients with separate disclosures explaining their history). Goldin said the SEC also saw firms include extra descriptions of how firms addressed or mitigated conflicts of interests when disclosing them, in a way that might downplay or minimize them.

“These types of statements undermine the commission’s goal of highlighting the presence of conflicts and helping retail investors understand the interconnectedness with how the firm makes money and the incentives they create,” she said.

The webcast was recorded and will be archived for later viewing, according to the SEC.