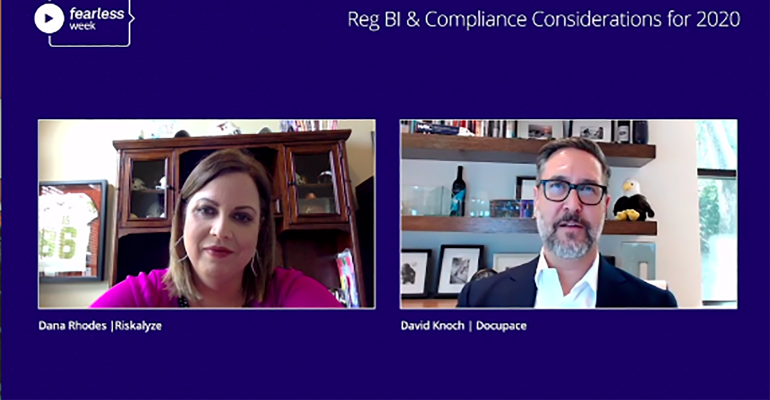 In a conversation during Riskalyze Fearless Week, Docupace CEO David Knoch also spoke about the new DOL rule and the need for trackable documentation for firms' Form CRS.

Though financial services firms have largely made “good faith” efforts to comply with the SEC's Regulation Best Interest rule, there remain gaps that need to be addressed in the long term. Particularly, auditable methods of tracking compliance with the rule, according to David Knoch, CEO of Docupace, which offers compliance back office support.

“I think there’s going to be this ‘day two’ compliance with Reg BI, which is going to cause firms to go back and revisit the plans they put in place to make good faith efforts toward compliance,” he said. “I don’t see enough lasting plans in place in the industry around Reg BI compliance and I think there’s still a lot more work we can do to end up streamlining the process, particularly as technology firms that are serving financial advisors.”

Knoch's comments came during a Riskalyze Fearless Week discussion with Dana Rhodes, a managing director of enterprise services with Riskalyze. The conversation centered on the ways firms were succeeding or falling short in Reg BI compliance, as well as how state fiduciary standards and the DOL’s new fiduciary exemption proposal could affect companies operating in multiple states.

Knoch said some firms struggled with the requirement that Form CRS delivery to clients be auditable as well as trackable. While some found success in using their custodians or printing their own forms to deliver to clients, they were less prepared for a systematic approach to know when the form would need to be re-sent to clients, or as to how it could be documented for a future audit by a regulator.

Related: RIA Deal-Makers Predict a Resurgence in M&A in the Second Half of 2020

However, Knoch surmised the new compliance mandates likely wouldn’t have a significant effect on advisor/client relationships, in part because clients already believed advisors would operate in their best interest.

“It would be crazy to think that anyone goes into any relationship with a financial salesperson or fiduciary, and everybody in between, with anything other than a fiduciary expectation,” he said. “Why would anybody have any expectation other than that?”

Knoch said many firms were in a “wait and see” approach while assessing state fiduciary standards. He noted that Massachusetts’ own standard, which will be implemented in September, became more industry-friendly in its final product (to the ire of consumer advocates). While he cautioned it was impossible to know, he suspected Reg BI would remain in place with some state fiduciary standards that were “reasonably aligned” with the SEC’s rule.

Knoch previously served as chairman of the board of the Financial Services Institute (FSI), which he noted was part of the group of plaintiffs that successfully led a court challenge to vacate the Obama administration Labor Department’s fiduciary rule in 2018. But when it comes to Reg BI and the DOL’s revised fiduciary exemption, he stressed that trade associations cannot always be against proposed rules.

“I’m not saying FSI is, but our work on that rule was clearly to stop something. But for every amount of energy you put into being against something, you have to put an equal amount of energy into being for something,” he said. “While we didn’t write (Reg BI), many things were in the final rule that we could agree with because we told them what we were for from the start.”

He also theorized it was not “totally coincidental” that the DOL’s new rule looked as it did, considering the current head of the department is Eugene Scalia, the lead attorney in the suit against the Obama DOL rule. While many argued this created an unavoidable conflict, DOL ethics attorneys cleared Scalia to work on the fiduciary rule revision in a decision last October, according to the Wall Street Journal.

But Knoch also argued that the Obama DOL rule had the unintended effect of better preparing firms to make a more seamless transition into Reg BI compliance, as much of the work they’d done to comply with the DOL rule could be kept in place for the new SEC mandates.

“No one was really starting from square one, and while there’s work to do here, I think our confidence in the industry to do this work well for the right reasons is pretty high,” he said.