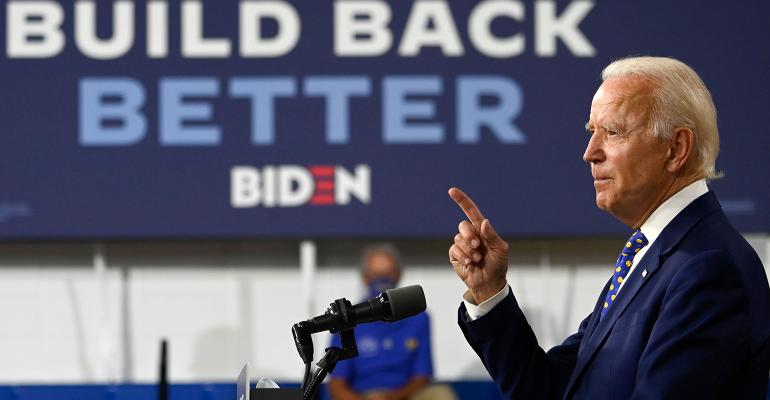 What Happens to Reg BI Under a Biden Administration?

Many regulatory analysts think it is unlikely that the SEC would undergo yet another rule-making process, especially considering how long it took to design and implement the current rule. But in a 'blue sweep,' Congress may act.

During the Democratic convention that nominated Vice President Joe Biden as the 2020 presidential candidate, the party released a platform that indicated it would revisit the SEC’s Regulation Best Interest rule should it win the White House.

“Democrats believe that when workers are saving for retirement, the financial advisors they consult should be legally obligated to put their client's best interests first,” the platform read. “We will take immediate action to reverse the Trump Administration's regulations allowing financial advisors to prioritize their self-interest over their clients' financial wellbeing.”

Related: What Regulatory Reforms Could a Biden Term Bring?

But if Biden is elected the nation’s 46th president, will a reconfigured SEC take the steps to overturn Reg BI altogether in favor of yet another rule? Many, including Amy Greer, the co-chair of North America Financial Regulation and Enforcement Practice at Baker McKenzie, said that Reg BI under Democratic leadership is likely here to stay.

“It was a very long haul to get it across the finish line, so the likelihood that the commission would scrap it and start again at this late stage is really unlikely, given the fact that there are other ways to address the concerns that might arise in a new administration about whether the rule is protective enough of investors,” she said.

Greer noted that little was likely to change at the SEC in the first few months of a potential Biden administration anyway, with the focus on filling cabinet positions and the COVID-19 crisis taking precedence over nominating new SEC commissioners and revisiting commission priorities.

A. Valerie Mirko, a partner in Baker McKenzie's Financial Regulation and Enforcement Practice Group, said the longer period of time between Reg BI’s development, implementation and the inauguration of a new administration would give the rule a chance to "harden," in contrast to the DOL fiduciary exemption proposal, which has yet to be finalized and is thus more vulnerable.

“If you want to talk about how hardened Reg BI is today, imagine April or May of next year,” Greer said, when the rule would be more deeply ingrained in the industry.

Barbara Roper, the director of investor protection at the Consumer Federation of America and an advocate for stricter standards around brokers than the current standard, said that while the commission is unlikely to scrap REG BI, under a new administration it could influence the industry by adopting formal guidance about the rule, explaining what “best interest” means in greater detail than the SEC has offered. In her view, that could more clearly ensure brokers have a “reasonable basis” for thinking that a recommendation they offered a client was the best available option.

“There often won’t be a single best; there could be multiple options that satisfy the standard, but it should be a narrow pool of options than satisfying suitability,” she said. “You get to a standard that actually is a more heightened standard than the suitability standard under FINRA rules.”

How the SEC enforces Reg BI is still an open question, and thus far there have been no cases related to the rule, Greer noted. Mirko said the commission was currently on a “ramp,” giving the industry more time to ensure compliance. Both the SEC and FINRA have made it clear that they were looking for good faith efforts early in the rule’s implementation, with a longer transition to enforcement.

“The ramp will shorten with a change in administration,” she said. “But the ramp was going to end regardless of who wins the election. The question is when.”

While a new administration and SEC chair could mean the agency might hasten the end of the "good faith" window, Greer believed the SEC would not want to be viewed as unreasonable.

“We are seeing more opportunities currently for firms to resolve deficiencies with [the Office of Compliance Inspections and Examinations], which is great,” she said. “I think with more extreme examples of non-compliance, there is a chance we will see those matters referred to Enforcement on a faster timeline.”

Roper pointed to the commission’s enforcement efforts on mutual fund share class selections as one of the SEC’s “bright spots” in recent years, but said it was an extremely narrow issue. She hoped the commission would consider using that enforcement action as a model when enforcing Reg BI and the Advisers’ Act.

“It’s not just the share class, but the fund, and not just the fund, but the strategy,” she said. “That would require the SEC to be considerably bolder in its enforcement than they’ve been inclined to be, but that would give more meaning to the best interest standard.”

Aron Szapiro, the director of policy research at Morningstar, also noted that control of the U.S. Senate could help determine the strategy of a Biden administration should he win the election. Democrats would have a 3-2 majority on the commission after Biden appoints a new SEC chair to replace outgoing Chair Jay Clayton, which would give the Democratic members of the commission greater opportunity to revisit Reg BI, but if the Democrats win the Senate and keep the U.S. House of Representatives, Szapiro believed we could see amendments to the Employee Retirement Income Security Act, as well as Dodd-Frank, which may have a higher regulatory impact on the industry.

“Democrats are clear about what they would want out of making such amendments: a uniform standard of conduct that elevates the standards for RIAs, aligns brokers’ standards with these new tougher rules, and de facto prohibits most conflicts of interest,” Szapiro wrote. “These rules would apply across different account types and constrain future administrations from relaxing the standards of conduct.”