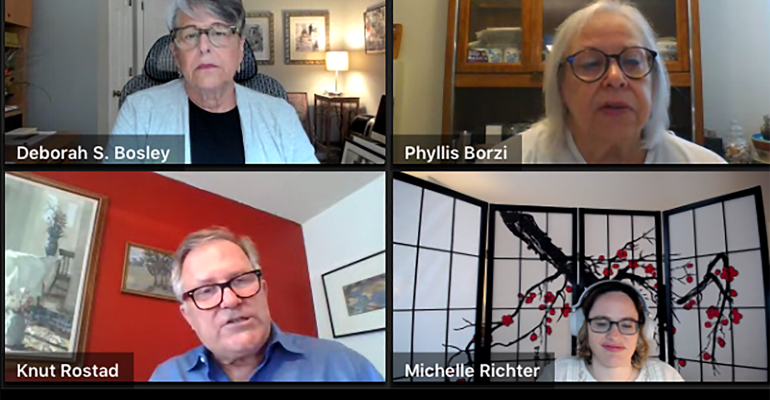 The Institute for the Fiduciary Standard released its alternate version of the disclosure document, arguing more was needed to draw the distinction between investment advisors and broker/dealers.

Knut Rostad, the founder of the Institute for the Fiduciary Standard, presented an alternate version of the Form CRS that investor advocates, during a panel discussion hosted by the institute, argued would more starkly draw the distinction between investment advisors and broker/dealers.

“The research and data is clear and extensive that disclosure alone isn’t sufficient to protect investors from harmful conflicts of interest that may result from investment recommendations,” Phyllis Borzi, the former assistant secretary of the Labor Department, said during the virtual panel. “But since the SEC has built its entire regulatory structure around disclosure, the least it could do is make this mandated disclosure simple and understandable. In that respect, it’s failed.”

Borzi, Rostad and other advocates have long argued that the distinctions made for clients between investment advisors and broker/dealers were unnecessarily muddied. The proposed alternative Form CRS would ask firms to more explicitly outline the differences between the business models, including how advisors and b/ds are paid and how they are mandated to deal with conflicts of interest (the alternative disclosure document can be seen here).

Earlier this year, Rostad and the institute urged SEC Chairman Gary Gensler and the SEC to make “major repairs” to Reg BI itself, claiming there was an inherent conflict when using the term “best interest” when describing the relationship between a broker/dealer and a client.

Rostad acknowledged that a Reg BI overhaul would require a lengthy, onerous process of new rulemaking but argued that a simple revision of Form CRS would not.

“There’s some genuine difference of opinion of where the wire’s tripped in terms of starting new rulemaking, as opposed to what does not trip that same wire,” Rostad said. “The Form CRS by itself, I think, was treated quite differently in the rulemaking than was the gist, the rationale and the result of Reg BI itself.”

Gensler has been noncommittal about revising Reg BI via new rulemaking; during testimony before the House Committee on Financial Services last month, Gensler stressed that the commission would ensure the rule was complied with as written through “examination, enforcement and guidance.”

Rostad hoped that if there was to be any forthcoming guidance, it could start with actually defining best interest, which he argued was excessively unclear. Michelle Richter, the head of Fiduciary Insurance Services, argued unclear definitions could damage the rule over the long term and drew an analogy with a New York state fiduciary rule in the insurance space that was recently overturned in court for “non-specificity” over what best interest actually means.

“This non-definition has implications across various channels and various forms of financial professionals into the financial lives of all Americans,” she said. “It’s critically important we have an agreement with respect to what's expected under this regulation.”

Despite their misgivings about the current disclosure mandates, Rostad believed the new Biden administration and the new composition of the five-member commission offered investor protection supporters an opportunity.

“I think you’ve got to go back 25 years before you find a commission as attuned to investor protection and interest as we see now in the three Democratic commissioners,” he said.