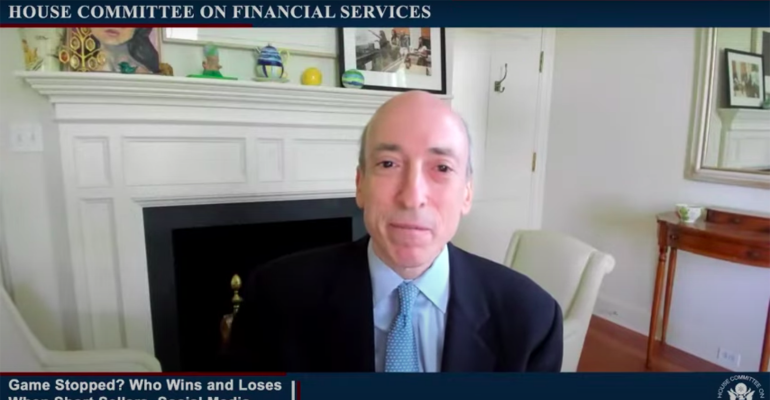 In a testimony before the House Committee on Financial Services, the new SEC Chair noted the regulator would evaluate Reg BI, and "update and freshen" it if need be.

During a congressional hearing this week, Securities and Exchange Commission Chair Gary Gensler told lawmakers the agency would make sure firms are complying with Regulation Best Interest “as written.” But investor advocates say there is still latitude to add more teeth to the rule through additional guidance.

“It’s important that investors actually have brokers take their best interest at heart,” Gensler said, in response to a question about Reg BI from Rep. Ann Wagner (R-Mo.). “And that’s what we’re going to do; through examination, enforcement, and guidance, ensure that the rule is fully complied with as written.”

“We’re going to vigorously get the most out of Regulation Best Interest, but we’re also going to evaluate,” he added. “If it’s not serving the purpose of investors, then we will update and freshen that rule as well as other rules.”

While Barbara Roper, the director of investor protection with the Consumer Federation of America, has significant concerns about Reg BI as it was designed, she believes Gensler’s comments could mean the SEC will use the rule to better rein in misconduct among errant advisors. Roper doesn’t expect a repeal of Reg BI, but with further guidance, she believed the commission could clarify that the term ‘best interest’ was not synonymous with suitability and that conflicts of interests need to be properly mitigated.

“There’s a concerted effort in the industry to avoid accountability under the ‘best interest’ standard,” she said. “So when Gary Gensler says we’re going to enforce it ‘as written,’ I hear it as ‘best interest means best interest, and you’d better get used to that.’”

Critics of the rule and fiduciary advocates have maintained that the rule’s use of the term ‘best interest’ could mislead clients, and that the SEC needs to clarify that brokers’ product recommendations are different from best interest fiduciary advice.

Reg BI went into effect on June 30 last year, and the SEC’s Division of Examinations clarified earlier this year that compliance with the rule will be a focus for 2021. In a previous interview with WealthManagement.com, Commissioner Caroline Crenshaw said the SEC would be evaluating whether Reg BI would actually result in investors getting advice that’s in their best interest, and whether it would actually reduce conflicts.

Gensler’s comments came in the midst of a lengthy hearing before the U.S. House Committee on Financial Services that predominantly focused on this winter’s GameStop and Robinhood controversy.

During his testimony, Gensler said that the SEC was preparing a report on the market turmoil surrounding Robinhood and GameStop, which should be released this summer. He also urged investors to submit public comments to the SEC on the need for climate change disclosures. In March, then-Acting Chair Allison Herren Lee opened a comment period to help the SEC evaluate disclosure rules. The comment period runs into June.

Gensler also noted that the ESG enforcement task force Lee announced in March would be looking at firms’ adherence to climate risk guidance already in place from 2010, as well as to see if companies are following other disclosure mandates that may be applicable.

“There are rules of the road already in place,” he said. “We still have to enforce the old rules as vigorously as you would want us to."