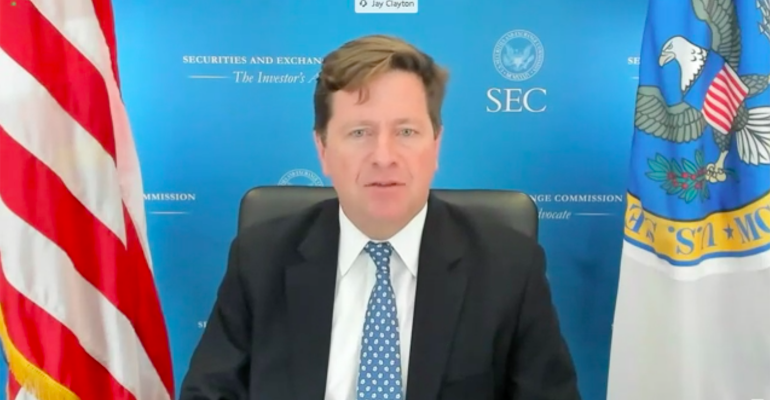 The testimony before the Senate Committee on Banking, Housing and Urban Affairs is likely to be Clayton's final appearance in Congress before leaving his role as SEC chair by year-end.

SEC Chair Jay Clayton defended the commission’s Share Class Selection Disclosure Initiative regarding fees for high-cost mutual fund share classes from criticism that it was “regulation by enforcement” today in what will presumably be his final testimony before the Senate Committee on Banking, Housing and Urban Affairs as chair.

Clayton will be leaving his post as head of the SEC by the end of this year, and his successor will be chosen by President-elect Joe Biden. During today’s remote hearing, senators from both political parties commended Clayton for his service, though the outgoing chair was also grilled on issues ranging from climate risk disclosure to what work was being done to transition into the new administration.

Sen. Tom Cotton (R-Ark.) decried the share class initiative, saying such enforcement decisions could be based on things that might be “opaque or even unknown” to those individuals or firms subject to oversight. He argued firms were fined when they failed to disclose 12b-1 fees, that cheaper shares of the same funds were available and that purchasing fund shares that paid 12b-1 fees as opposed to other options adversely affected investors.

Investment advisors have a duty not to put their interests ahead of their client, as well as a duty of candor, Clayton replied, saying the share class disclosure initiative was an attempt to efficiently deal with a widespread industry practice. But he also reiterated the fines were situations where the SEC had to weigh the facts and circumstances of each case.

“I understand that some people felt that they were within the bounds of the law, where we felt they were not,” he said. “I’m hopeful there’s been more clarity brought to this, but I’m also comfortable that the Enforcement Division pursue this, having that belief that they were on the right side of the law.”

The SEC’s disclosure initiative has been criticized by the Financial Services Institute for leaving individuals “at the mercy of independent agencies ‘extralegal guidance,’” as the advocacy organization wrote in a petition earlier this year. But investor protection advocates, including Phyllis Borzi, the former assistant secretary of labor in the Obama administration, said such an argument was a “no holds barred challenge” to the commission’s authority to enforce existing regulations on certain fees.

During the Senate hearing, Clayton also defended the SEC’s recent rule-making on expanding access to exempt securities offerings, saying the regulator's work helped to smooth out a “patchwork” of regulations that had built up over the course of three decades. He also said the SEC’s revisions to the shareholder proposal process were long overdue, updating aspects of rules that in some cases hadn’t been changed since the 1950s. According to the new rules, shareholders who want to submit proposals must hold shares in a company for at least three years.

What is the amount you need to do to demonstrate the level of commitment that allows you to demand the attention of the 20, 30, 50,000 other shareholders for them to go through the proxy?” he asked. “If you’ve held it less, you need a bit more of a financial commitment because you’re proposing changes for the long term. You should demonstrate you’re in there with your shareholders."