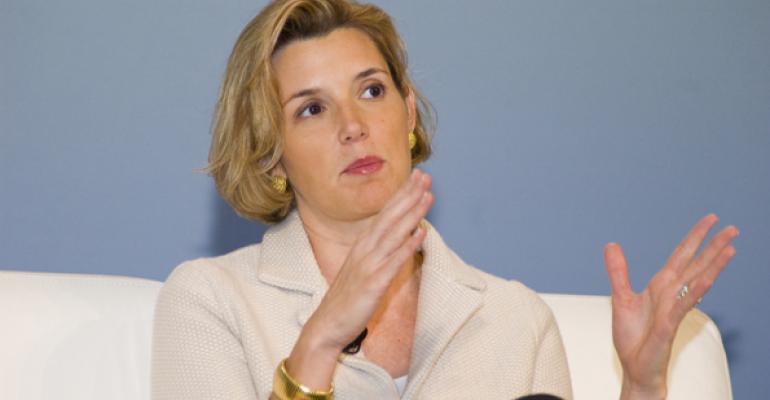 If the financial advisors want to tap into a largely underserved market with nearly $5 trillion in investable assets, they need to rethink the way they interact with female clients, says Sallie Krawcheck. The former president of Bank of Americas’s global wealth and investment division kicked off the Investment Management Consultants Association’s 2015 New York Consultants Conference with a keynote address that urged advisors in the audience to stop “mansplaining” to women.

According to Krawcheck, who currently serves as the chair of Ellevate, a network for professional women, two-thirds of women who work with an advisor say that the advisor doesn’t understand them. Women ranked financial services dead last when asked to rate how well 33 different industries serve their needs, and a lot of it is because of a culture of condescending to, and patronizing, women clients.

“Women feel the industry talks down to them and doesn’t respect their needs,” Krawcheck said.

Krawcheck also said that 77 percent of women surveyed want to invest in companies with diversity in senior management. They value companies with high environmental, social and governance standards. 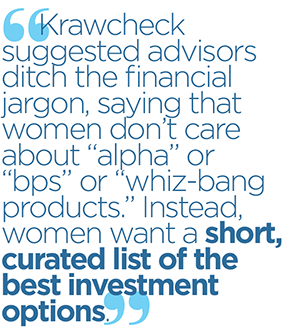 Advisors could improve relationships with all clients by improving their communication. Krawcheck said that the top reason a client leaves their advisor is that phone calls aren’t returned quickly enough.

“Client satisfaction increases most proportionally with frequency of contact,” Krawcheck said. “I love this business, but I think we do a bad job of advertising ourselves.”

Krawcheck also urged advisors to embrace social media, arguing that it’s not just millennials using it but 90 percent of the mass affluent. It allows advisors to showcase themselves as experts, and not having a presence can create an image of being older and technologically outdated.

Krawcheck also warned against money funds, saying they make promises that are not backed by capital. Among the $2.7 trillion in money market fund assets, 30 percent is invested in risky European banks.

She argued that cash is done, credit cards are over, and that advisors should instead keep an eye on cyber currencies like bitcoin and digital payment startups like Square.

Krawcheck also touched on robo advisors, diversity and the fiduciary standard. Many of the points echoed similar statements Krawcheck made in November at the Schwab IMPACT conference and in December at MarketCounsel.