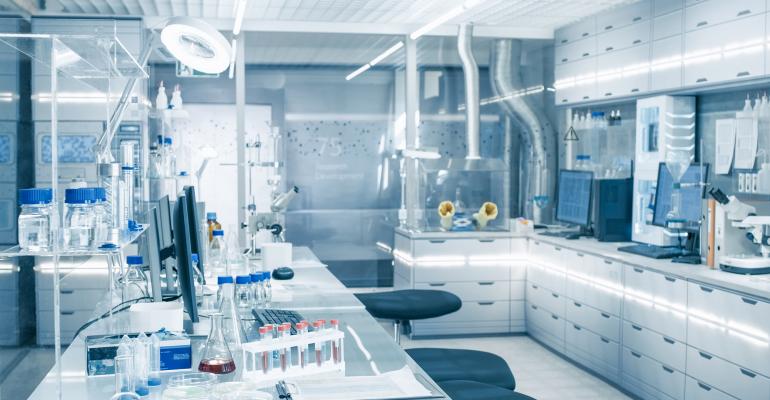 The Life Science Sector Continues to Grow, with Sales Volume Almost Doubling from 2020

Last week, global real estate investor and manager Hines announced that it will be putting a greater emphasis on life sciences/biolab properties through both acquisitions and new development. “The life sciences sector is experiencing an era of unprecedented growth driven by a rise in both public and public funding combined with a post-pandemic sense of urgency and market opportunity,” said Hines Global Chief Investment Officer David Steinback in an official statement. Though Hines already has some biolab projects in its portfolio, including the Levit Green development near Texas Medical Center in Houston, the company made the decision to increase its efforts in the space after reviewing the data collected for a recent whitepaper. Hines researchers forecast that 20 select U.S. metros alone could see demand for class-A life sciences properties increase by 33 to 50 percent, representing up to 65 million sq. ft. of space.

Meanwhile, architecture, design and planning firm SGA, which specializes in life science projects, revealed that it had a banner year in 2021, with 11 million sq. ft. of active construction projects in the sector. To meet the growing demand, the firm had to double the staff in its Boston and New York offices.

In fact, the life science industry in the U.S. saw a record level of venture capital funding in recent months, reaching more than $30 billion in the first three quarters of this year and nearly matching the total for 2020, according to a recent report from commercial real estate services firm CBRE. Biotechnology research and development jobs in the U.S. are growing at their fastest pace on record, the report notes—at 3.0 percent in 2021, compared to an annualized rate of 1.3 percent between 2016 and now.

“Occupancy has never been higher in most cases around the country,” says Philadelphia-based Ian Anderson, senior director of research and analysis with CBRE. Anderson adds that the submarkets that are posting historically low vacancy rates of at or below 1.0 percent for life sciences space include Cambridge, Mass., the North Peninsula of San Mateo County outside of San Francisco and Torrey Pines in San Diego. That is happening in spite of the fact that in the Boston/Cambridge market, for example, the amount of new biolab space has nearly doubled in the past three years with the addition of 20 million sq. ft.

Related: Where Are the New Opportunities for Investment in Biolab Assets?

“Life science labs have quickly become a highly sought-after property type for both tenants and investors,” Anderson says. “This intense demand for lab space is the natural result of a global push for new medicines begetting strong funding and hiring in the life sciences sector.”

In the third quarter, demand for life sciences space in the U.S., totaling nearly 23.8 million sq. ft., exceeded new supply be 2.8 million sq. ft., in spite of the continued ramp up in new construction, CBRE found. The top three life sciences hubs in the country—including Boston/Cambridge, the San Francisco Bay Area and San Diego—are seeing average asking rents soar from over $70 per sq. ft. in Torrey Pines to well over $100 per sq. ft. in Cambridge.

On a nation-wide basis, vacancy at life sciences properties in the third quarter averaged 4.9 percent, according to CBRE, with a six-month jump in demand totaling 19.7 percent and 513 tenants out in the market looking for space. Average asking rents ranged from $29.11 per sq. ft. in the Raleigh/Durham, N.C. area to $94.62 per sq. ft. in Boston/Cambridge.

“Rents are also reaching record levels in almost every market,” Anderson adds. “The occurrence is a natural result of growing demand exceeding supply, and this is causing a rush of capital into the market seeking life sciences properties, which contributes to higher prices.”

Real estate investors are excited by what’s happening in the life science sector and want “to catch the wave,” according to Schiada. She says that high barriers to entry, compressing cap rates and competitive bidding have not deterred investor interest. “Investors are placing bets on locations, buying up class-A office buildings and waiting for tenants to leave to convert them to lab space,” she notes.

For example, earlier this year, private equity giant KKR agreed to pay $1.08 billion or $1,440 per sq. ft. for The Exchange, a 750,000-sq.-ft. building at 1800 Owens St. in the heart of San Francisco’s life sciences hub. According to Anderson, the LEED-certified property will offer a combination of class-A office and biolab space.

From January through November of 2021, investment sales volume in the life sciences/research & development sector reached $19.1 billion, up from $10.0 billion during the same period in 2020 and more than double the average investment volume seen before the pandemic, according to real estate data firm Real Capital Analytics. More than $8 billion in sales volume so far this year was attributed to trades of life sciences/research & development properties in Boston, followed by San Jose, with more than $4.5 billion in transactions. As of June, cap rates nationwide averaged around 6.1 percent, a record low, and a 250-basis-point drop from where they were a decade ago.

Schiada notes that nearly 25 million sq. ft. of ground-up and converted lab space is under construction across all major U.S. life science markets, but approximately three-fourths of that space is already pre-leased. And that demand should only continue to grow over the next 12 months, supported by life sciences employment growth and venture capital funding, according to both her and Anderson.