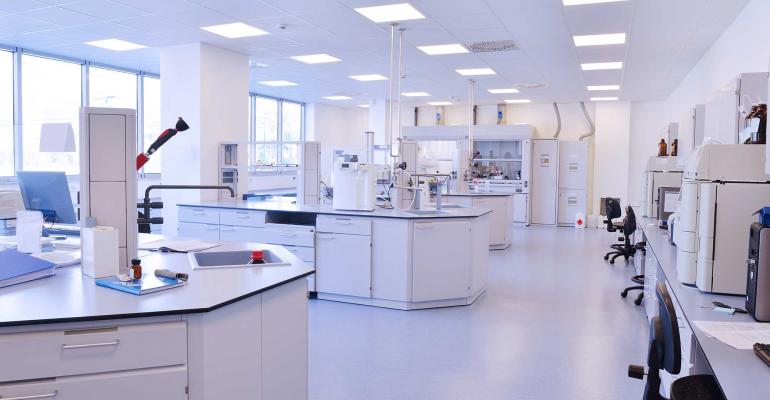 Built-in safety protocols, growing venture capital funding and a degree of protection from the remote working option are all contributing to the sector’s popularity.

Commercial real estate investors are showing increasing interest in biolab facilities as healthcare research and development has accelerated due to the pandemic.

“[There is] an increased demand for laboratory space which, when coupled with low vacancy rates in most life science cluster markets, drives rental rates higher,” says Russell Brenner, president of the medical office and life sciences division with CA Ventures, a global real estate investment management firm headquartered in Chicago. “Very few sectors can demonstrate the same level of rent growth, especially in the COVID-19 environment. Similar to medical office, life sciences is viewed as a defensive asset class.”

Data firm the CoStar Group is receiving more inquiries about lab properties in 2020 than before, says managing consultant Paul Leonard. That is likely because of the pandemic, but also because the segment has been consistently outperforming other commercial properties in select markets for years now, Leonard notes. Investor interest is very high across the country, as the work conducted in lab buildings is not easily accomplished off-site, offering the sector a degree of protection against the work-from-home trend, says Matt Withey, managing director at Virtus Real Estate Capital, a private equity firm based in Austin, Texas. He adds that tenant demand has remained very strong over the last several months.

Among the biggest examples of the sector’s current popularity, private equity giant the Blackstone Group has made the decision to sell the BioMed Realty Trust, the second-largest U.S. owners of life science buildings, from a fund that would sell it or take it public to another Blackstone fund that has the ability to hold it indefinitely, according to the Wall Street Journal. The decision was driven by a preference expressed by Blackstone’s investors, who did not want to cash out of the sector. The sale of the company, which operates 93 buildings across the country, was completed at a purchase price of $14.6 billion and represents a $6.5 billion increase from the price Blackstone paid for it in 2016.

Kathleen McCarthy, global co-head of Blackstone Real Estate, says “life science is one of the Blackstone’s highest conviction themes.” “In real estate, many of our investors are eager to maintain or increase their exposure to life science office,” she adds.

In another recent deal, an affiliate of medical and seniors housing REIT Ventas Inc. acquired Genesis South San Francisco, a 796,572-sq.-ft. life science campus, for around $1 billion, according to the Commercial Property Executive.

Meanwhile, Brookfield Asset Management is reportedly exploring a sale of about 2.3 million sq. ft. of life science space it acquired as part of its acquisition of Forest City Realty Trust two years ago. The company would like to get approximately $3 billion for the portfolio, reports Bloomberg.

In addition to already built-in safety protocols and reliance on the kind of work that can’t easily be done remotely, biolab properties also tend to be located outside of the central business districts (CBDs) and in lower rise properties, taking out the risk of mass public transit and packed elevators for employees going into the office, says Leonard.

Venture capital funding for companies designated as healthcare also hit a record in the third quarter, according to PwC MoneyTree. The 12-month trailing figures as of the third quarter was $27 billion—up 33 percent compared to the same time period in 2019 and nearly triple the $10 billion average since 2000. Approximately 64 percent of healthcare venture capital funding over the past year went to companies located in California or Massachusetts, where many life science firms are clustered. The figure is up slightly from the 61 percent long-term average, says Leonard.

As a result of these dynamics, Brenner expects to see even greater investor allocations to the sector in 2021 and for demand to outpace supply of available properties, continuing to drive pricing upward.

But Brenner says to keep an eye out for new innovation centers emerging outside of these core life science clusters, particularly in Chicago, Denver and Austin, Texas. These cities are seeing increased tenant demand from life science companies and new supply coming on-line.

“Certainly, in the current environment they have been more resilient [than traditional office,]” says Withey. “Whether this continues will depend on how quickly traditional office rebounds, and whether research investment continues to pour into the life science industry.”