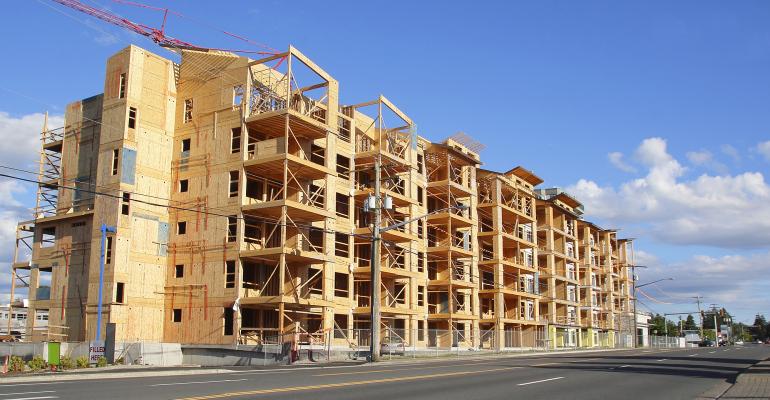 Barring major economic headwinds, apartment rents are on track for big rises for the balance of 2022 as developers struggle to keep pace.

This is despite the fact that developers are on pace to finish more luxury apartments in 2022 that they have in decades—but renters are expected to fill them up, even as rents continue to rise. Economists—so far—are also not worried that developers will eventually build more apartments than the current demand calls for. Instead, they worry about how long the U.S. economy will continue to run so hot—creating new households and new demand for housing.

“Rent growth will not materially slow down until demand cools and vacancy ticks up, which will happen if and when affordability becomes a headwind or if the job market stumbles,” says Jay Parsons, vice president and head of economics and industry principals for RealPage, based in Richardson, Texas. “The worst-case scenario is a slowing job market that stagnates wages, while other consumer expenses continue to surge.”

Not building enough apartments for an overheated economy

Related: Multifamily Deals Continued to Pile In During a Busy First Quarter

Developers are building apartments as quickly as they can—they are planning to open 400,000 new apartments in 2022—a record-breaking number, according to Marcus & Millichap.

But the vacancy rate is likely to keep dropping anyway. Just 2.4 percent of apartments overall are likely to be vacant the end of 2022, according to Marcus & Millichap. That’s the lowest the measure has been in over two decades.

“We are not building enough multifamily on a national level,” according to data firm CoStar, headquartered in Washington, D.C.

Developers continued to build new apartments—even during the pandemic—but not enough to keep up with the pace of household formation. The rising cost of land and construction materials continues to hold developers back, according to Moody’s.

In addition, homebuilders built fewer single-family homes in the past decade than any in the last 50 years, according to Ermengarde Jabir, an economist at Moody's Analytics specializing in commercial real estate. And a significant minority of single-family homes being bought and built are going to the single-family rental market rather than to homeowners.

“I don’t see any product types close to being overbuilt,” says Paula Munger, assistant vice president of industry research and analysis at the National Apartment Association.

The demand for apartments has been growing for a long time—especially for the most expensive, luxury apartments. The number of occupied “four- and five-star” units has increased by 2.6 million units or 127 percent since the start of 2010, according to CoStar, which uses “four-star” and “five-star” to designate class-A properties.

The demand is likely to keeping growing quickly for all kinds of housing—including apartments—as long as the U.S. continues to quickly create new jobs. So far in 2022, the U.S. economy added an average 518,000 a month to the number of people with jobs. This has been a surprise given the tight labor market conditions, according to CoStar. The percentage of workers who say they are unemployed and looking for work has stayed under 4 percent.

Many of those newly-employed people are likely to use their wages to form new households, moving out of parent’s basements or leaving roommates behind. And each new household will need a place to live.

“Renter incomes are still surging and lease-ups are still filling up fast,” says Parsons. “The high-income renter demand pool for new luxury apartments has proven far deeper than even the most bullish developer could have ever anticipated.”

The net demand for apartments was 75 percent higher than its previous peak in the 30 years that RealPage has gathered data about apartments.

“If anyone had modeled and forecasted such a number going into 2021, they would have been laughed out of the room,” says Parsons. “When you look at that type of demand combined with huge increases in market-rate renter household incomes plus a severe housing shortage, the rent growth isn’t so surprising.”

Surprises of the future

The biggest potential challenge that could hurt apartment investments would be problems in the whole U.S. economy… such as inflation and the federal response to fight it.

“Inflation has been the biggest surprise for economists over the past 18 months,” says Sebree. Prices were expected to rise as the pandemic came to a close and federal stimulus like low interest rates continued. “The persistent severity of the price increases have defied most expectations.”

The Federal Reserve now plans to raise its benchmark interest rates seven times in 2022—its most aggressive actions in decades. “These policies have substantial implications for interest rates and the economy at large,” says Sebree.

Other factors could also weaken the demand for apartments. “The ongoing conflict in Ukraine, new COVID variants (the impacts of which vary widely by country) and persistent inflation are all real threats to the economy,” says NAA’s Munger. “If the Fed can successfully tame inflation without inciting a recession, it will be a very pleasant surprise.”