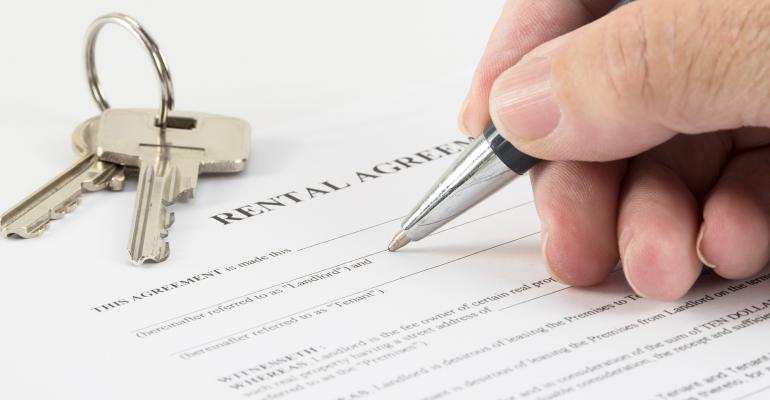 There are few signs of an affordability ceiling in the market-rate apartment segment, says Jay Parsons, of RealPage.

Apartment rents have also been going up at the same time as inflation has reached the highest rate in decades.

As a result, some renters have moved to less expensive cities, while others—those living in luxury apartments on the one side and those living in class-C housing on the other—have so far been willing to pay more for their living quarters.

“These are not signs of an affordability ceiling—yet—in the market-rate segment,” says Jay Parsons, vice president and head of economics and industry principals with RealPage, a provider of property management software based in Richardson, Texas. “Demand remains at record-high levels despite the higher price points.”

Rents are rising through the roof

The average cost of renting a new apartment grew by more than 15 percent in 2021 across the U.S., according to commercial real estate services firm Marcus & Millichap. Rents are likely to grow by another 9 percent in 2022, the firm’s researchers predict.

So far, renters have found a way to pay the higher rates. Vacant units are leasing up quickly. Existing tenants are renewing their leases.

“The lease renewal conversion rate in the first quarter of 2022 was the highest level on record,” says John Sebree, senior vice president and national director of the multi-housing division for Marcus & Millichap, who works the firm’s Chicago office. “Without additional housing options, tenants tend to stay put rather than take their chances finding a place in a very competitive rental market.”

Many renters don’t have attractive alternatives. The average price of owning a home is also rising quickly. “The relative price of renting is cheaper in many of the markets we analyze,” says Matt Vance senior director and Americas head of multifamily research with commercial real estate services firm CBRE.

Luxury rents rise the most

Rents are growing most quickly at luxury properties, where most of the renters can afford to pay. At class-A properties, rents increased by 15.5 percent in 2021, Marcus & Millichap reports. But the average annual rent at a luxury apartment community still makes up just 24 percent of the median income of the residents.

The high incomes of luxury renters may also be rising more quickly as the U.S. economy recovers from the worst of the pandemic.

“Higher income earners are seeing accelerated wage growth in an extremely tight labor market, while many service sector workers, who tend to rent at lower-tier properties, were more severely impacted by pandemic restrictions and work in industries that have yet to fully recover,” says Sebree.

At class-B properties, rents grew by 15.7 percent in 2021. But most class-B renters still probably have some room left in their household budgets, according to Marcus & Millichap. Average rent is now just 29 percent of their median income.

In contrast, average rents at class-C apartment properties grew by just 7.3 percent in 2021. “Class-C rents could be somewhat limited by renters’ ability to pay, as average rents account for more than 40 percent of median household incomes,” says Sebree.

Landlords may be thinking about more than how much their residents can pay as they set their rates right now. For example, rents are growing relatively slowly at professionally-managed class-C apartment properties, where the residents earn relatively high incomes. At professionally-managed class-C communities, where leasing agents require prospective residents to show that the annual rent is less than 30 percent of their incomes, the average rent still increased just 6.8 percent over the 12 months that ended March 2022, according to RealPage’s Parson’s.

Meanwhile, rents may be rising more quickly at class-A and class-B properties as landlords make up for money they lost during the first year of the pandemic.

“While class-A properties were the most impacted by the pandemic, they are experiencing a rapid recovery,” says Sebree. “Class-C properties meanwhile maintained rent growth throughout 2020, when the other property tiers were experiencing weakness.”

There are also geographical differences in how much apartment rents are rising. “Sunbelt metros are seeing the fastest pace of rent growth,” says Sebree.

For example, six of the seven metro areas in the U.S. where rents rose the most over the 12 months that ended in the first quarter of 2022 were in Florida, according to early numbers from Marcus & Millichap. Rents rose by 25 percent to 30 percent in all of those metros.

“Some of these results [are] from high-earning households that are migrating away from the coastal markets and into Sunbelt, where households have much stronger purchasing power and are happy to pay at the top end of the market,” says CBRE’s Vance. “It’s still a bargain compared to where they’ve come from.”