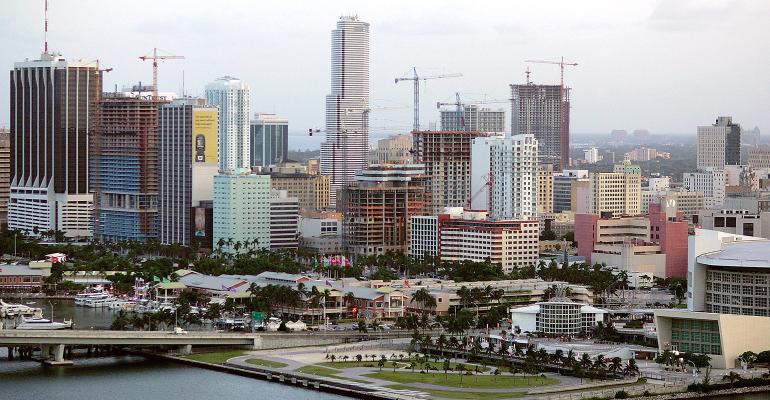 Whopping rental rate spikes caught the eyes of many apartment investors and even with the pace of growth likely to slow, overall fundamentals remain attractive.

Rents grew very, very quickly in Miami in 2021. Investors in Miami think apartment rents are likely to keep growing—increasing the value of Miami apartments—just not as quickly as the past year.

During the years of the coronavirus pandemic and recovery, millions of apartment renters moved to Sun Belt towns and cities where apartment rents are still less expensive than Gateway cities like Boston and New York City—even after a year of giant rent hikes. As the pandemic ends, some of those workers may return to those Gateway cities.

However, Miami’s economy is likely to keep growing even if the U.S. economy overall struggles to fight inflation and other Sun Belt cities may struggle to fill new apartment properties.

“The combination of low taxes, great weather, and a business-friendly environment have driven both entrepreneurs and major players to Miami,” says Omar Thowfeek, managing director at Hines, which recently acquired Gables Station, a 14-story, mixed-use tower Miami's Coral Gables neighborhood. “The luxury apartment market has retained its strength due to the relatively limited land availability and high home prices.”

Miami’s apartment market is unlikely to be seriously overbuilt, according to investors—even as the U.S. economy evolves.

More apartment deals than ever in Miami

Investors are on track to spend more money in 2022 than they have in years to buy apartments in the Miami/South Florida metro area.

Investors spent $5.5 billion to buy apartment properties in the first half of 2022, according to

MSCI Real Assets (the data firm formerly known as Real Capital Analytics). That’s a 63 percent increase from $3.4 billion in the first half of 2021. And 2021 was already a huge year for apartment investment in the Miami/South Florida metro area, according to MSCI. Investors spent $14.9 billion—more than double the total from any other year, from the recovery from the Global Financial Crisis through the coronavirus pandemic.

The increased investment was even more stark if only counting acquisitions of apartment properties within Miami Dade County proper, where investors spent $2.5 billion in the first half of 2022, more than double (138 percent) what investors spent the year before, according to MSCI.

These investors continue to pay higher prices and accept lower cap rates to make these deals in Miami. Cap rates dropped to 4.6 percent in the second quarter, down from the average, four-quarter, trailing cap rates of 4.8 percent the year before, according to MSCI.

Of course, investors are spending more to buy apartment across the U.S., but the rate of increase is faster in Miami. Investors spent $154.6 billion to buy U.S. apartment properties in the first half of 2022, according to MSCI. That’s a 53 percent increase from the year before—which is still relatively slow growth compared to Miami-Dade.

Rents are also still growing very, very quickly in Miami—just not as quickly as a few months ago.

“As new apartments come online the rent growth will moderate,” says Hines’ Thowfeek. “But the continued in-migration of people, restrictions on new building, and higher mortgage rates will have strong tailwinds on the apartment sector.”

Same-store, effective, asking rents for new leases were 22.4 percent higher in the second quarter of 2022 than the year before in the Miami-Miami Beach-Kendall, Fla., market, according to RealPage.

Miami is one of the top five cities where rents grew the fastest over the year ending in the second quarter, according to RealPage.

But it can’t last forever. “The double digit rent growth the area has seen is unsustainable,” says Hines’ Thowfeek. For context, annual rent growth in Miami averaged 5 percent over the past five years.

Miami’s rent growth is already slowing, and was lower in the second quarter than the annual rent growth of 22.9 percent in the first quarter of 2022.

Part of this high rent growth is caused by a shortage of apartments in Miami, compared to demand. The percentage of apartments occupied in the second quarter of 2022 in Miami-Miami Beach-Kendall, Fla., rose to 97.7 percent, up 1.5 points compared to the year before, according to RealPage. However, that high occupancy rate is still sagging slightly from its peak of 98.5 percent in late 2021. During the coming year, the occupancy rate in Miami-Miami Beach-Kendall is expected to plateau at around 98 percent, according to RealPage.

Rents typically rise in apartment markets where the occupancy rates grow past 95 percent—but not by percentage rates in the double digits.

During the coronavirus pandemic, the offices around the U.S. closed to slow the spread of the virus. Millions had to work from home, and many took the opportunity to move their homes from expensive Gateway cities to less expensive cities and towns including Miami.

“Miami stands out as a work-from-anywhere or a net migration winner since early 2020,” says Carl Whitaker, director of research and analysis for RealPage.

The average renter signing a new lease agreement in Miami reported that they earned about $120,000 a year in the second quarter of 2022, according to RealPage’s sample of professionally-managed apartments. That up about 52 percent from $79,000 in the first quarter of 2020, just before the pandemic.

“That includes a sizable number of renters who have kept their New York or Boston salaries and are applying that to South Florida’s (relatively) affordable multifamily housing stock,” says Whitaker. Even with the recent rent hikes, Miami rents are still about $830 less than the average Gateway metro.

Experts predict that the demand for apartments stay strong—though not as strong as it has been recently. Not all of these wealthy renters are likely to stay in Miami. From April to June 2022, 429 more people moved out of Miami than moved to the area. That's not a flood of people leaving town, but it is a big change from the pandemic.

If the U.S. economy slips into recession this year, that will also bite into the demand for apartments and the ability of property managers to ask higher rents.

Over the next year, ending in the second quarter 2023, developers are expected to open 8,921 new apartments in Miami—an increase from the average of about 6,100 a year over the last five years, according to RealPage. Competition from these new apartments should also cut into the ability of property managers to push rents higher—but not by that much

“It all ties back to limited supply,” says Berkadia’s Sinberg. “We are undersupplied and have been for a long time.”

Land to build a new apartment property is hard to find here. “We are constrained on one side by the Atlantic and the other side by the Everglades and are a fully built-out market,” says Sinberg.

Also, it is increasingly difficult to get the approval to build new apartments, especially in the most desirable submarkets like Coral Gable. “While opening up a new business is not difficult in Miami, getting a building off the ground can be challenging in certain areas,” says Hines’ Thowfeek.

Investors also still believe that Miami is poised to keep growing, even as the U.S. economy changes and changes again.

“The combination of low taxes, great weather, and a business-friendly environment have driven both entrepreneurs and major players to the city,” says Thowfeek. “Miami has really exploded the last decade.” He cites major corporations relocating or establishing a significant outposts in Miami like Citadel, Icahn, Starwood, Blackstone and Goldman Sachs. “The city has really embraced technology and venture capital, which has found strong roots in its entrepreneurial culture.”