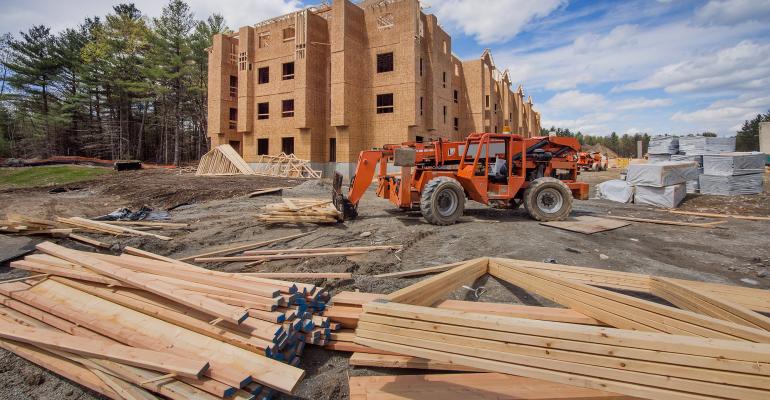 Rising labor and materials costs coupled with more expensive debt due to rising interest rates are combining to cut into yields on multifamily development projects.

The cost of construction will probably keep rising—cutting into the yield of investments in apartment developments—even though a few materials, such as lumber and concrete, have become less expensive in the last few months.

The bids contractors submit to build new apartments keep including higher and higher prices. That’s in part because material prices are likely to keep rising overall. And with the national unemployment rate below four percent, the cost of labor is growing as fast as ever. Also, many contractors already absorbed high prices for materials earlier in the pandemic recovery without passing them on to developers. Today construction contractors are in demand and seem to have the power to ask for higher prices when bidding out projects.

That deepens the hole many developers already have in their construction budgets because of rising interest rates. “Developers have been getting hit on two sides—the financing side and the bid side,” says Ken Simonson, chief economist for the Associated General Contractors of America.

The producer price index (PPI) for nonresidential construction—a measure of the price contractors say they would bid to build a fixed set of buildings—grew 23.9 percent over the 12 months that ended in July 2022, according to data from the U.S. Bureau of Labor Statistics.

Related: How a Multifamily Investment Firm Uses TICs to Expand its Portfolio

The cost of construction materials is also still rising—but not as quickly. The PPI for inputs to multifamily construction grew just 8.4 percent over the 12 months that ended in July 2022.

“The PPI for new non-residential construction—what I call the ‘bid price’—has been going up more steeply than the inputs,” says Simonson.

That’s partly because contractors who once kept their bids low are passing more and more of their own high costs on to developers.

At least the cost of construction materials have begun to stabilize. “The cost of materials in labor we are seeing a mixed picture as opposed to everything shooting up,” says Simonson. “The monthly change is small or flat.”

The cost of lumber, for example is much less than a few months ago, though it still costs much more than before the pandemic. The cost of lumber and plywood was 14.2 percent less in July than in April, according to federal data from the Bureau of Labor Statistics. However, the cost was still 37.2 percent more than December 2020.

“Lumber and fuel are still significantly higher than they were pre-COVID,” says Marc Padgett, CEO of Summit Contracting Group, Inc. “They have fallen from the highest points… we are hopeful to see them soften even more now that we are on the tail end of this.”

But other prices are still growing quickly—like the cost of gypsum used in sheet rock or the cost of concrete used in foundations. And prices overall are unlikely to drop.

“The only time I have seen pricing drop across the board in my career was when the economy crashed around 2008,” says Padgett. “That type of economy does not appear to be on the horizon, so although pricing should soften, it is not likely to reduce. The exception is a few things, such as lumber, that are more market-driven.”

The shortage of workers leads to both high costs and delays—putting even more stress on developer bottom lines.