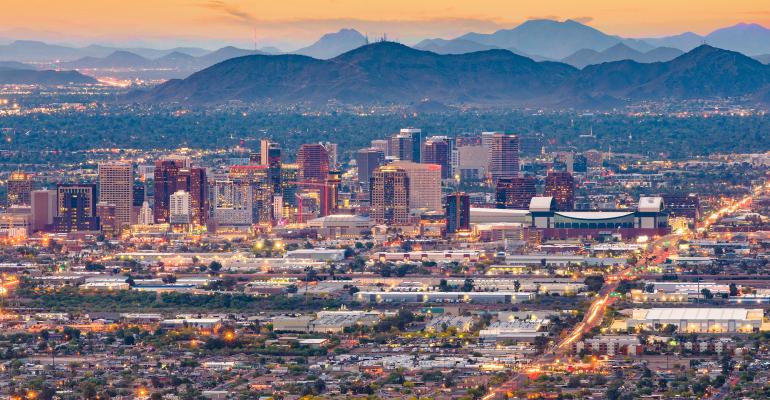 Rents are up more than 25 percent in one of the nation’s most scorching multifamily markets. That's fueling continued strong investor demand, in spite of rising interest rates.

The residential rent hikes in Phoenix can be hard to fathom. The more than 27 percent rate of rent growth over that last year is so high, the number seems like it must be a typo.

Investors in Phoenix are taking the high rate of rent growth seriously, however. They are paying aggressive prices for apartment properties relative to those already high rents. They–and most economists—expect the rents to continue to rise in Phoenix, if more moderately, over the next few years. The only question is how much?

The large number of apartments now under construction is unlikely to satisfy the high demand for housing in this growing city. But at some apartment communities, renters may already struggle with higher rents.

Related: No End in Sight for Strong Demand for Class-A Multifamily Units

Apartment buyers spent $17.8 billion to buy apartment properties in Phoenix in 2021, according to MSCI Real Assets, the data firm formerly known as Real Capital Analytics. That’s more than double the $8.2 billion they spent in the Phoenix in 2019, which had been biggest year for apartment investment in Phoenix of the last five.

These investors accepted average cap rates of just 4.2 percent in 2021, according to MSCI. Cap rates have dropped consistently, year after year, from 5.6 percent in 2017.

High rents are a big part of the attraction for these investors. Average rents in Phoenix grew to $1,660 a month in the first quarter of 2022. That’s almost $400 per month higher than a year prior, according to Marcus & Millichap. That adds up to a stunning 27.2 percent increase year-over-year. To put that in context, effective rents are only expected to grow 9.1 percent in Phoenix in 2022, on average, according to Marcus and Millichap. Still, that’s higher than inflation in the rest of the U.S. economy—but not by a huge margin.

Those higher rents are supported by a very strong economy—even by the overheated standards of the U.S. in 2022. The number of jobs in the metro area is expected to grow by 3.9 percent in 2022, according to Marcus & Millichap. The new investments include a new $12 billion Taiwan Semiconductor Plant and Apple’s $2 billion global command center.

“Phoenix was a top-three job-growth market every year and the current employment momentum in the region is a return to this previous trend,” says Asher Gunter, vice chairman for CBRE.

All those new jobs are likely to create demand for a lot of new apartments. Even the large number of new units under construction are unlike to fully meet the need that has built up in recent years. Developers plan to finish 19,000 new apartments in 2022, which would increase the inventory by 5 percent, according to Marcus & Millichap. That would be 7,000 more than the previous top year for new construction in Phoenix.

But vacancy rates are expected to inch up to just 2.8 percent in 2022, according to Marcus & Millichap.

“Greater Phoenix is 15,000 apartments short of meeting current demand,” says Logan Migliorino, director of investments for Forum Investment Group. “There is little concern that the area would be overbuilt anytime soon.”

The challenge to finishing projects in an overheated economy will probably cut into the number of properties that open on-time. “The construction labor shortage remains a significant bottleneck in the construction process and will continue to be a strong governor in the amount of units that can actually be delivered in a given year,” says Sean Cunningham, vice chairman for CBRE.

Phoenix has also built up a huge shortage of housing in recent years.

“During the Great Recession there was a huge imbalance between housing supply and demand, with construction freezing for a few years and housing demand continuing to grow,” says Zamir Kazi, CEO of ZMR Capital. “That imbalance has grown as Phoenix has continued to be a top metropolitan statistical area for in-migration.”

Developers agree. “With lower business and living costs than other major metros and the 20-34-year-old cohort expected to grow faster than the national average, we continue to be bullish on developing multifamily throughout the Phoenix metro,” says Josh Purvis, managing partner for Thompson Thrift Residential.

However, rising rents will also eventually cut into the value proposition of Phoenix as affordable compared to other West Coast cities.

The fast rise in rents could also create challenges to apartment communities that serve lower-income renters, who pay more of their income for rent. “Certain lower income blue collar pockets are being priced out of their local neighborhoods and are relying on roommates or picking up another job to afford rent, which causes hesitation with some investors,” says Kazi.

“We are keeping an eye on interest rates and the effect that more expensive capital will have on investor underwriting,” says Matt Pesch, vice chairman with CBRE Phoenix Multifamily Institutional Properties. “Over the last month, rising interest rates have started to impact pricing expectations and investors are taking a more selective approach to underwriting potential acquisitions.”

“Many buyers were using high leverage debt instruments to finance extremely low cap rate deals because there was so much value-creation opportunity,” says Kazi. “Investors were able to increase rents by 20 to 30 percent annually while their largest uncontrollable expenses, taxes, were capped at 5 percent per year. This NOI growth coupled with a low interest rate environment fueled a pricing frenzy in the market.”