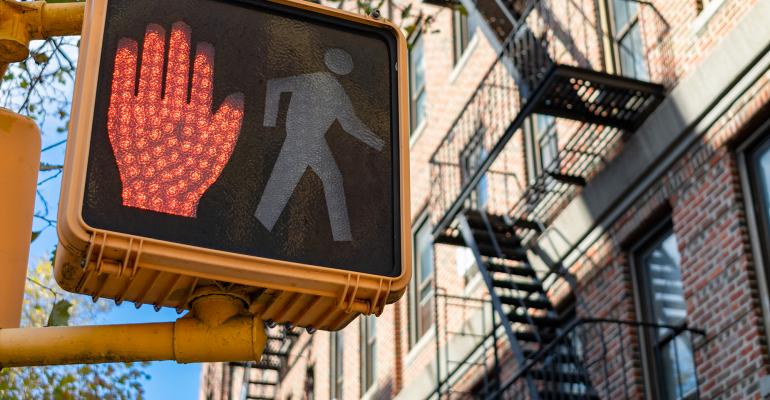 Investors Have Backed Away from “Walkability” in Making Multifamily Plays

Prices have fallen for assets with higher "walkability" scores while they've been rising for assets in more spread out, car-centric communities.

It’s been good year for anyone tired of hearing about the high value of “walkable” apartment properties.

Walkability has become a buzzy concept in residential circles in recent years, propelled in part by “walk scores” metrics developed by Redfin and other competitors. These numbers are meant to gauge how many key amenities are within easy walking distance of the residences in a community, underscoring less need for getting in a car to run every errand.

Yet there has been a clear trend, which has now been accelerated by the pandemic, prices rising in suburban areas where residents are more dependent on cars, according to analysis by Real Capital Analytics (RCA) while it’s been moderating or falling in areas with higher walkability scores. RCA compared apartment property prices in places with varying levels of walkability as measured by their walk scores as determined by WalkScore.com.

Starting in 2018, investors began bidding up the prices apartment properties in places with middling to terrible walk scores more quickly than in downtown areas. Prices dropped slightly (-0.84 percent) for apartment properties in central business districts over the 12 months that ended in March 2020, largely before the U.S. economy shut down to fight the coronavirus, according to RCA’s Commercial Property Price Index.

That ended nearly a decade in which prices rose more quickly for downtown apartments than they rose anywhere else—luring apartment investors of all types into the downtowns of the most expensive cities.

Rents had risen quickly in these already-expensive areas. But eventually these markets became overbuilt. Then the pandemic struck—and throughout the summer and fall news stories proliferated chronicling Americans migrating away from expensive big cities and smaller apartments to less expensive suburbs and smaller cities—and more space. Many developers were caught struggling to lease new apartments in the pandemic.

“In many urban core locations, new supply has continued to come on stream at an aggressive pace, and big rent giveaways have been common at the properties still moving through initial lease-up,” says Willett.

“With so many people working from home, some households have opted to save money and rent lower-priced apartments in the suburbs,” says Greg Willett, chief economist for RealPage, based in Richardson, Texas. “The most walkable neighborhoods that tend to command the highest rents have struggled to retain residents when leases have come up for renewal, leading to stalled occupancy and often rent cuts.”

Some experts contend, however, that walkability will make a comeback and the recent moderation in prices will turn around.

“High walk scores usually align with strong local amenities and tend to have higher rents than areas that require a drive out of the vicinity to reach amenities,” says John Sebree, senior vice president and national director of Marcus & Millichap's Multi Housing Division.

Single-family houses with strong Walk Scores sell for average prices a quarter higher than comparable properties in car-dependent neighborhoods, according to a February 2021 analysis by Redfin, parent company of WalkScore.com.

“At this time, of course, walkability is regaining some appeal,” says Andrew Rybczynski, managing consultant for CoStar Group. “In the future those amenities within walking distance of an apartment will become meaningful again.”