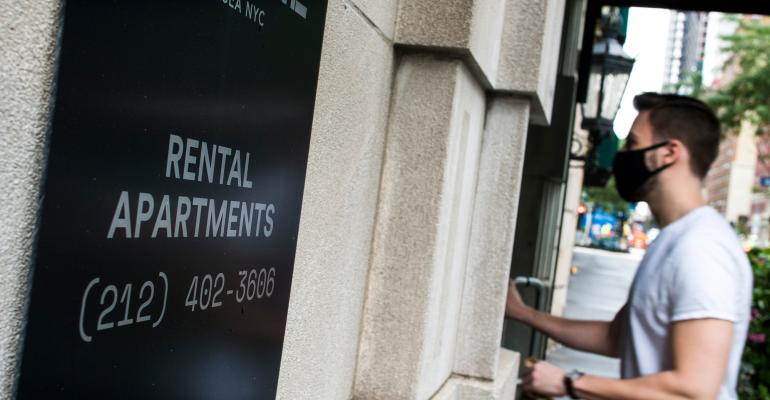 The freefall is over, but it might take a few years for urban apartments to fully return to their pre-pandemic form.

As many Americans fled cities during the pandemic and generated a glut of empty apartments, landlords in Manhattan and other urban metros slashed rents and offered draw-dropping concessions, including covering moving costs, free internet, months of free rent and other sweeteners.

Now, with millions of vaccine shots going out daily and the promise of a post pandemic future drawing closer, things are beginning to change. As more lockdown measures are eased, prospective urban residents are being lured back by city life and lower rents. For example, in Manhattan in January the number of new deals jumped 94 percent year-over-year to 5,459. It was the largest one-year jump since  April 2011, reported appraiser Miller Samuel Inc. and brokerage Douglas Elliman Real Estate.

Given the brightening prospects, the question for the sector is how long it might take for rents in top markets to completely bounce back. And while most observers are optimistic, the timeline will be years rather than months.

"If full recovery is defined as getting both occupancy and rents back to the levels that were seen in early 2020, it takes another two to three years... even in our best-case scenario," says Greg Willett, chief economist for RealPage, Inc., based in Richardson, Texas.

Downtowns already on the mend—with a long way to go

Many of these downtown apartments are already doing much better than just a few months ago. Rents are once again rising in San Francisco, for example. On the other hand, rents in Manhattan are still at their lowest level in a decade. In fact, the Wall Street Journal reported that some landlords have removed vacant inventory from the market in an attempt to help decrease supply and stabilize rents.

Amid all of this, economists are looking forward to a strong economic recovery in summer 2021—and that will include downtowns in gateway cities.

"The prospects look good for some real growth to begin to emerge later this year, once most people have received COVID vaccinations," says Willett. "Office workers are returning to their desks, and lifestyles begin to show some resemblance to what was seen pre-pandemic."

In the urban core of gateway cities like New York City, 92.5 percent of the apartments were occupied as of March, according to RealPage. That's down from 95.9 percent before the pandemic in Manhattan plus the urban core neighborhoods of San Francisco, Los Angeles, Seattle, Chicago, Boston and Washington, D.C. While progress will occur over the next year or so, RealPage forecasts say that occupancy rates in these places won’t make it back to roughly 96 percent until the middle of 2023.

For example, rents in downtown San Francisco dropped 15 percent over the pandemic year—though rents were rising quickly in early 2021, according to CoStar.

"The amount of ground to make up is enormous," says Andrew Rybczynski, managing consultant for CoStar, working in the firm's Boston offices. "San Francisco will almost certainly be one of the last downtowns to recover." Other downtowns that suffered big losses, like Seattle, New York, and Washington and are currently not experiencing outperformance in rent growth will probably face longer recoveries as well.

"These neighborhoods will in many ways look and feel like their former selves well before pricing gets all the way back to its prior peak," says Willett. "That period when households may perceive that they’re getting a bargain is what will make recovery possible."

In less expensive cities, like Dallas, apartments downtown will take less time to fill up.  Rents have risen over 2 percent in March since the start of 2021, and were down just 1 percent compared to the year before. This rent growth is significantly faster than at the same time two years ago, before the pandemic. "It seems likely that downtown Dallas will surpass pre-pandemic peaks before the summer," says Rybczynski.

High-rise towers cut their rents most deeply during the pandemic—by 9.3 percent, according to projections across the U.S. by Marcus & Millichap for the first quarter 2021 compared to the year before. That compared to a 4.2 percent rent cut for mid-rise apartments and a 2.1 percent increase for low-rise apartments.

"Leasing activity is up sharply in gateway metro urban cores, but lots of that activity still stems from existing renters playing musical chairs," says Willett. "They’re moving from one apartment to another, taking advantage of the opportunity to upgrade their housing choices or to save money on rent."

Effective rents for new leases downtowns in these gateway cities are down by an average of about 15 percent compared to early 2020, according to RealPage. In expensive locations like these, that typically works out to drop in monthly rent of about $450 a month. A most of this drop comes in the form of rent concessions. Nearly half (43 percent) of the apartments available for rent offered some form of rent giveaway in early 2021, according to RealPage. The typical discount is around 10 percent, or a little more than five weeks of free rent, but it’s not unusual to see discounts equaling two months or more of free rent.

"Step one in getting back on track will simply be to burn off the drastic rent concessions seen in the market," says Willett.

Suburbs are still a bargain compared to downtown

Less expensive areas like suburbs suffered far fewer losses in pandemic than these expensive downtowns. The percentage of occupied apartments in suburban areas was several percentage points higher than in downtowns in early 2021, according to economists.

But even with rents falling in downtown areas, it is still much more expensive to live downtown than in the suburbs. "Anywhere between 35 percent and 50 percent premiums to live downtown is not unusual, though Boston comes in at an over 80% premium," says Rybczynski. "The spread has shrunk in most places, but the difference is still enormous."

Long after the pandemic is over, downtown areas will offer experiences and amenities than renters can't get anywhere else. "Experiential retail is much denser in downtowns and cities than the suburbs," says Rybczynski. "Theater districts usually don’t pop up in suburban towns."

That's especially true in most expensive cities, which draw visitors—and renters—from around the world. "There is not substitute for Broadway or Michigan Avenue or Powell Street," says John Sebree, senior vice president and national director of the Multi Housing Division at Marcus & Millichap, working in the firm's Chicago offices.

These amenities will continue to attract renters. "Our demand forecasts still call for stronger [overall] demand in downtowns than suburbs, but we expect the spread to narrow between demand in cities and suburbs," says Rybczynski.