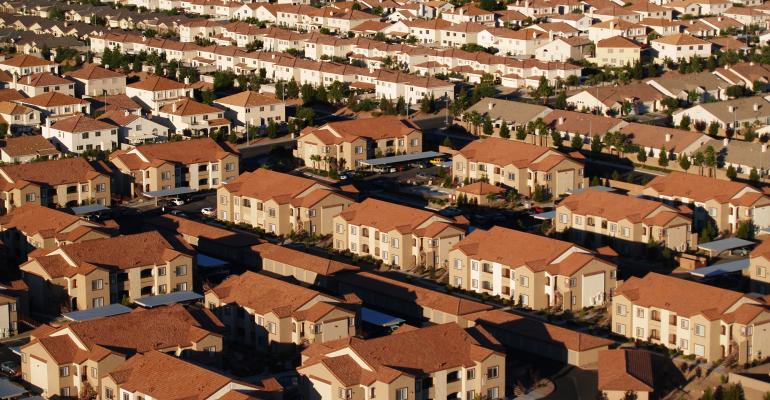 Investors spent $2.5 billion to buy multifamily properties in Las Vegas in the first three quarters of 2021.

Many new investors—including both institutions and private buyers—bought their first apartment communities in Las Vegas just before the onset of the coronavirus pandemic. During the crisis, deal volume slowed. But as Las Vegas has reopened for business, multifamily investors have returned along with more new buyers, pushing property prices higher in one of the strongest markets for apartments in the U.S.

“Las Vegas is seeing an increase in terms of pricing because of increased investor demand—from both institutional and private capital,” says John P. Cunningham, managing director for JLL Capital Markets, working in the firm’s offices in Phoenix.

These investors pay top dollar, relative to the income from the properties. Cap rates for apartment sales in Las Vegas dropped to an average 4.6 percent in the first quarter of 2021, compared to 4.9 percent the year before and over 5 percent for most of 2019.

“Further compression stalled in Las Vegas,” says Jim Costello, senior vice president for Real Capital Analytics, based in New York City. “There was a shift to a premium on cap rates for Las Vegas for a bit, and it seems that the premium was too much.”

Cap rates have stayed low in Las Vegas even as apartment rents surged higher in 2021. More in investors also crowded into the metro area this year. Over the first three quarters of 2021, the amount of money investors spent on apartment properties in grew more in Las Vegas almost anywhere else in the U.S.—both in terms in the volume of deals overall and the average price per unit of apartment properties, according to RCA.

Investors spent $2.5 billion to buy apartment properties in Las Vegas in the first three quarters of 2021, according to RCA. That more than three times (up 249 percent) the amount of money they spent during the same period in 2020. The volume of investment grew more quickly in Las Vegas than any other top apartment market except San Diego, where the volume of investment grew 252 percent. The prices investors pay for properties in Las Vegas also rose over the first three quarters of 2021, rising more than 20 percent, according to RCA.

These investors in Las Vegas are picking up where they left off before the coronavirus pandemic.

Just prior to the pandemic, deal volume was surging in Las Vegas at a stronger pace than the U.S. overall. The volume of deals in Las Vegas fell more than the rest of the U.S., in part over fears around travel and tourism, but also because Las Vegas is a smaller, has historically been a volatile market prone to bigger swings, according to RCA.

The investors in Las Vegas include many who are new to the city.

“Throughout 2021, we have seen a surge in both new private capital sources as well as a significant inflow of institutional investors that have specifically targeted Las Vegas,” says Charles Steele, managing director for JLL's Capital Markets Group, working in the firm's Phoenix office. “Las Vegas has historically seen significant private capital investment activity while lagging from an institutional investment perspective.”

New investors include SB Real Estate Partners, an investment firm based in Orange County, Calif., which paid $67 million in early November for 241 garden apartments at The Russell Apartments in West Las Vegas.

LaSalle Investment Management, headquartered in Chicago, also spent $155.6 million in October to buy the 456 apartments at The Curve in the Spring Valley suburb of Las Vegas from the local investors at The Calida Group.

Investors used to see Las Vegas as a small, volatile market for apartment properties. The ability of renters to sign leases and pay rent at apartment communities seemed too dependent on how well the tourism business was doing in the city’s casino economy.

That’s changing as this desert city grows and diversifies.

“While Las Vegas has been volatile in the past, that is no longer the case,” says Cunningham. “Las Vegas has proven to be one of the most resilient cities in the world.”

Las Vegas has recovered quickly from the coronavirus pandemic, which shuttered over 150,000 hotel rooms in the worst days of the crisis. Tourism and revenue is now surpassing pre-pandemic levels of tourism and revenue, according to JLL. The economy of the metro area has also become more diverse, with a population of 2.5 million and new investments in health care, technology and manufacturing.

“Altogether, the Las Vegas local market story is one of resiliency, diversification and desirability—all of which support forward-looking multifamily market success,” according to the Arbor-Chandan Large Multifamily Opportunity Matrix, which put Las Vegas at #1.

Las Vegas is now forecast to create more jobs and new households than most other Western markets in the mid- to long-term, according to JLL. Average rents are also forecast to grow more quickly here than in most other cities in the region.

"Las Vegas is becoming a top-tier investment city as a result of increased population, affordable housing, low taxes and diversification of the economy," says Cunningham.

All this will push the demand for apartments higher. But Las Vegas developers are only expected to open 3,688 new apartments in 2021, a relatively restrained 2.36 percent increase to the inventory. In comparison, developers will increase the inventory of apartments much more in 2021 in Denver (4.92 percent), Phoenix (5.33 percent) and Austin (7.59 percent), according to JLL.