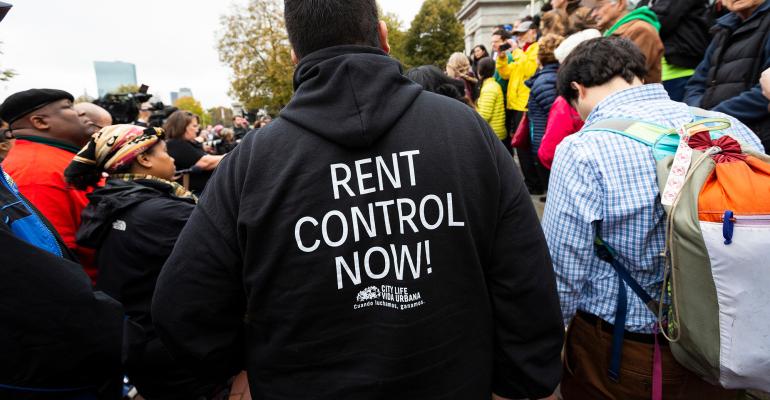 After a Year of Rapid Rental Hikes, Support for Rent Controls Increased

Voters in the midterms in a handful of states enacted new rent stabilization measures. What does that mean for multifamily investors?

Voters created new rent controls and toughened existing rules from California to Florida to Maine when they cast their ballots in elections across the country earlier this month. The stress of the coronavirus pandemic and steep rent increases in the recovery afterwards created a burst of activity that resulted in the measures.

To be sure, in most of the country, rent control measures are an exception. In fact, many statewide laws prevent local governments from creating any new rent regulations. But ballot measures approved by voters can break these barriers. Tenant advocates have also recently convinced state lawmakers in places historically associated with rent measures, like California and New York, to allow new rent control statutes. But measures were on the ballot in some unexpected places as well.

“Things are different now—you are seeing the debate in places where you wouldn’t expect it,” says Jim Lapides, for the National Multifamily Housing Council (NMHC), an apartment industry group based in Washington, D.C.

NMHC argues the rent control won’t stop the forces that push rents higher – including a simple shortage of housing compared to the number of households that need a place to live. However, it takes time to build new apartments, the housing shortage continues to get worse and tenant advocates argue for a more immediate solution to rising rents.

California already has a state-wide rent control law. But voters in the recent election passed ballot measures that made rent control tougher in several cities.

And in Santa Monica, Calif., 58 percent of voters supported a measure lowering annual rent increase limits from 6 percent to 3 percent. A second measure disallows rent increases during a federal, state or local state of emergency.

In Portland, Maine, on the other side of the U.S., voters approved a “tenants’ rights” measure limiting annual rent increases to 70 percent of the increase in the CPI, in addition other tenant protections.

Finally, voters in Orange County, Fla., approved a disputed rent control measure limiting rent increases to 9.8 percent over the next year. However, a State Circuit Judge previously ordered election officials not to certify the results of the vote, declaring the ballot summary to be misleading. Like over half of the country, Florida preempts rent control at the local level. However, we anticipate that multiple municipalities will revisit the issue in 2023.

Even bigger changes might be coming in states where Democrats sympathetic to rent control lead the legislature. Most states have laws that forbid local governments from creating new rent control laws.

However, activists may have a chance to convince lawmakers to allow rent control in two of those states, Michigan and Minnesota, where Democrats took control the state legislature in the 2022 election.

“However, with housing affordability challenges in Detroit and elsewhere, Michigan now is a state to closely watch,” says Lapides.

There is even a proposal to create a form of rent control nationwide for any apartment properties that accepts financing from the programs of Freddie Mac or Fannie Mae. “Tenant advocates are lobbying the White House to issue an executive order capping rent increases on homes with mortgages backed by Fannie Mae or Freddie Mae at the lower of 3 percent or 1.5 times the rate of inflation annually,” says Lapides.

Evictions are back and rents are rising

Many localities are now processing as many eviction filings as they did before the pandemic. Some have even more, according to the Eviction Lab at Princeton University, which has tracked seven states and 31 cities week by week since the first weeks of the pandemic.

Eviction was already a crisis before the pandemic—threatening millions of renters every year, according to the Eviction Lab, which has begun the analyze eviction filings nationwide starting in 2000. In 2018, U.S. property managers files 3.6 million eviction cases in 2018—nearly 6 out of 100 renting households were threatened with eviction at least once in that year alone.

Moratoriums on evictions, which protected renters during the pandemic, have finally ended across the U.S. The last to go, according to a list kept by the Eviction Lab, was in the city of Fresno, Calif., which has finally ended in June 2022.

The cost of renting also seemed to explode just as these eviction moratoriums were ending. Effective apartment rents grew more than 10 percent over the 12 months that ended in the first quarter of 2022—rising even more quickly in cities like Phoenix, where rents grew 29 percent, according to data from RealPage. Although there have been recent signs that the pace of rent growth has subsided significantly.

Rental assistance programs created during the pandemic to help renters who fell behind in rent are also now longer available. “A lesson learnt from the pandemic is that when you supply assistance, you avoid evictions,” says NMHC’s Lapides.

Localities that were good at distributing these funds have long since run out. Other localities have been less effective at using these programs.

“Many applications for emergency rental assistance remain pending. Such cases represent continuing uncertainty for both tenants and landlords regarding the future of the tenancy," says Charles McNally, director of external affairs at the Furman Center at New York University School of Law.