/sites/all/themes/penton_subtheme_wealthmanagement/images/logos/footer.png
Recent
Recent
Seven Must Reads for the CRE Industry Today (May 24, 2022)
May 23, 2022
Investment Activity in the Skilled Nursing Sector is Ramping Back Up
May 23, 2022
NASAA Approves Model Rule Targeting Unpaid Arbitration Awards
May 23, 2022
New York Tax-Paying Residents Were Moving Out Even Before Covid
May 23, 2022
Featured
The 10 Best and 10 Worst States in Which to Retire in 2021
Jul 15, 2021
Poll: 15 Classic Books on Investing and the Markets
Apr 03, 2020
Fifteen Must-Listen Business Podcasts for Advisors
Aug 14, 2020
Celebrity Estates: Jay Leno and Planning for Classic Car Collections
Feb 22, 2022
Schwab IMPACT
brought to you by 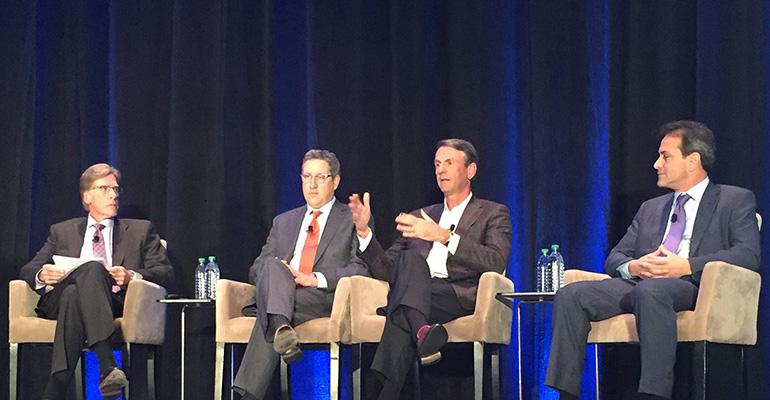 Why Aren't There More Acquisitions Among RIAs?

There’s plenty of opportunity, argued a panel of acquiring RIAs at Schwab IMPACT. But unrealistic expectations on the part of buyers and sellers mean there is far more “frog kissing” than actual matches.

For growing advisory firms, acquisitions are increasingly seen as a viable path forward; for advisors looking to exit the business, selling is seen as an easy way to monetize the business at the end of a career.

There seems to be plenty of opportunity; According to research by Charles Schwab, there’s been a 75 percent increase in new SEC registrations since 2012—and a growing number of firms with more than $1 billion in assets under management that might make ready buyers.

But despite the numbers, successful deals are relatively rare, according to a panel speaking at Schwab’s IMPACT Conference this week. The 52 deals announced in the first half of this year is on equal pace to last year, according to the custodian.

“You could argue deals are not keeping up with the industry,” said Nick Georgis, who oversees Schwab’s practice management consulting and field experience teams.

Why isn’t there more activity? It’s not a lack of capital—there’s been an infusion of investment funds in the industry over the past few years.

Rather, successfully buying a firm requires a significant time commitment, a clear articulation of business needs and a tolerance for “kissing a lot of frogs” before finding the right connection, according to Rush Benton, senior director of strategic wealth at Captrust, a $250 billion AUM registered investment advisory firm with individual clients and a significant retirement plan practice.

“It’s not pretty,” he said. “There are many, many conversations that don’t lead anywhere.”

Of the 284 deals that took place between 2014 and 2017, 41 percent of the buyers were other RIA firms, while 33 percent were strategic acquirers, which make investments in firms without absorbing them into a larger advisory business.

Both Benton and Neal Simon, the CEO of $6 billion AUM Bronfman Rothschild, said the jury was still out on the success of the strategic acquirers or aggregators that make investments in a number of different firms that want to share back office capabilities.

“The financial structure did not facilitate the building of scale,” Benton said. “The jury is still out if one plus one plus one equals three minus a lot of legal fees.”

Captrust is “built around scale for the advisor,” he said. “Advisors highest and best use is not looking for technology platforms or employee health plans,” he said. “It’s dealing with clients.” In fact, the majority of Captrust’s 450 employees aren’t in advisory roles, but in the typical business support staff, like technology support, human resources, office administrators. “Everyday, 325 people come to work to support the advisors. That’s resulted in faster growth, and a very healthy organic growth rate,” he said.

“Scale is really important in the business right now,” he said. “It’s a competitive advantage. It allows us to reinvest more money back into the business. The business model is successful.”

Simon said Bronfman Rothschild made four acquisitions in the past year, including three “lift outs,” essentially poaching advisory teams from other RIAs.

“As the industry matures, some companies are just run better,” Simon said. “In all three, there was some level of dysfunction in the firms they were trying to get away from.”

Georgis said firms that are not growing, or not helping younger advisors begin to transition to ownership of the business, are increasingly vulnerable to seeing their advisors poached.

Benton said many potential sellers have unrealistic expectations. “If culture is not a good fit, it gets messy and heavy and there is a lot to fix.”

A lot comes down to the attitude of the seller. “Are they self centered? Or focused on clients? Is it all about the money?”

“We’re looking for people who buy into what we’re doing. If they are just looking for money, it’s not going to be a good fit.”

Simon agreed that generally speaking, anyone motivated to sell a firm is probably not a good acquisition. If a potential target comes to him with a pitch deck, he’s probably not interested.

As for the tricky question of valuation, all agreed that the right way to measure a firm’s value is a multiple on EBITDA, not revenue.

“More important than the multiple is the terms of the deal,” said Simon. “They aren’t the same. I can give you a high multiple, but you’ll hate the terms.” Take, for instance, things like client acquisition targets or asset growth. “The multiple doesn’t get in the way. It’s control that gets in the way. People have not thought ahead the degree to which they are willing to give up control.”

“Structure is more important than price,” Benton agreed. “We’re getting tire bands around valuations. As a buyer, you’re looking at the growth rate beyond the deal. If you built a business that can grow, it’s worth more.”